From the Canadian Jewish News, 2018 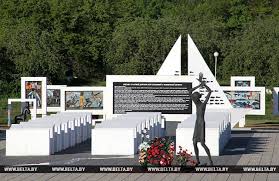 Zhlobin, in the Minsk province of Belarus, was the birthplace of my maternal grandmother, Esther Arnoff Naftolin, who was born there about 1895. Her grandfather, Binyamin Rubinowicz, had been a blacksmith in Zhlobin, and she had had many uncles, aunts and cousins there as well. She left as a girl with her family about 1904 to come to Canada.

When I was researching my family history book, One Hundred Years in Canada: the Rubinoff-Naftolin Family Tree (which I published in 2008), I discovered that a few photographs of Zhlobin from a century ago had been handed down within our family. This summer I planned a short trip to Belarus, in part to see whether our ancestral home or blacksmith shop was still standing.

I arrived in town armed with a century-old photograph showing some relatives clustered outside and in the window of the small log cabin that was our family home; even my grandmother’s grandfather, Binyamin, was in the photo. The photographer had been standing across a small manmade canal of the Dnieper River, I had been told, called the “tchornitzka” in Russian.

In Zhlobin, we asked a Zhlobiner where the building might have stood — might still be standing — but he couldn’t say for sure. But when I mentioned the word “tchornitzka,” he instantly became animated. “Tchornitzka!” he repeated, and beckoned us to follow. He led us to a spot perhaps 100 yards away.

The tchornitzka of Zhlobin was not what it used to be. While most of the canal had been closed off, enough remained that we had a pretty good sense of where my family’s ancestral home and blacksmithery had once been.

There was nothing there any more: the area was now a park, as green as a bowling green, with nary a building or ruin in site. But now I knew that it was here, near this spot, that my grandmother was born, here that her parents, grandparents, uncles and aunts had lived. The words, “Something happened here,” went through my mind: the title of a story by Norman Levine. Like myself, Levine had gone in search of something terribly significant and found emptiness instead. 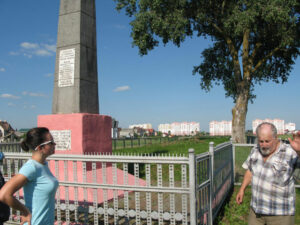 I found another tranquil lawn just outside of town, at the site where a monument had been raised for 2,500 Jews from Zhlobin whom the Nazis had marched from the ghetto and massacred on the eve of Pesach in 1942. Something happened here. Boris, a local Jewish man who accompanied us, described the day that the Jews were taken here on foot, and in trucks and horse-carts, threatened by SS men with machine guns as townsfolk watched from the sidelines.

When a military train momentarily disrupted the procession, some Jewish mothers saw an opportunity to save their young children. Boris was an 18-month-old infant at the time and should have been among the dead. But his mother passed him to a Gentile woman, who kept him for a few days, then gave him to another married woman who, despite the high risk, raised him as her own.

Boris had figured out the truth as a teenager, but his adoptive mother only told him on her deathbed. She was posthumously designated by Yad Vashem as a Righteous Gentile — the only such person from Zhlobin. Today a mezuzah hangs on Boris’s doorpost and his three sons live in Israel.

While in Belarus, I also visited Minsk, Bobruisk, Streshin, Rechitsa and Vasilyevich: with the exception of Minsk, all towns where I have strong evidence that my ancestors or their immediate families lived.

Vasilyevich is the smallest of these towns but it somehow made the biggest impression on me. Two people in Vasilyevich, a historian and a member of the town council, told my guide that they were eager to meet with me; for them, my visit was an important occasion, they explained, because they didn’t get visitors from the outside very often.

They drove with us to a remote field near a forest where the Jewish cemetery had been; they had been there the day before to clear the path and remove some of the weeds in the cemetery. After crossing an overgrown field, we ventured up a hill to where a few fenced-in tombstones were still evident.

With the help of my guide-translator, I told the historian that my second-great-grandparents and other relatives had lived in Vasilyevich in the 1850s and 1860s where they had a blacksmith shop and perhaps manufactured wagon wheels: their surname was Naftolin. She thanked me and said she was collecting names of the estimated 2,000 Jews who lived in the town before the Nazi era. But so far she has managed to collect only 35.

After encountering sites of mass killing in Minsk, Bobruisk, Streshin and Rechitsa, my feeling was, the more I saw, the less I understood. But perhaps the most incomprehensible site of all was Krasny Bereg, located about 20 kilometres outside of Zhlobin, a place I didn’t even know existed until my guide stopped there unexpectedly. 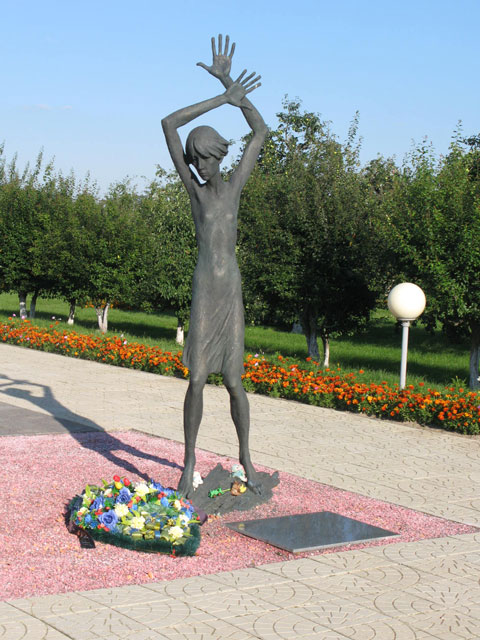 It was there that the Nazis established a military hospital for German soldiers and, needing fresh blood for transfusions, imported thousands of children as forced blood donors. By one account about 12,000 children with the right RH factors were deported there from nearby districts and further afield. It was essentially a concentration camp for children. The Nazi “doctors,” it is said, cruelly experimented and took blood “to the last drop.” In all, more than 5,000 children and adults were reportedly killed at Krasny Bereg.

Today there is a memorial complex that features the tall, gaunt sculpted figure of a girl at the entrance, rows of empty school desks in a “white classroom,” rows of bright marigolds, an apple orchard, and more than 20 children’s paintings. “Everything is imbued with the light of hope,” someone posted online. “However, it is really hard to hold back tears.” ♦