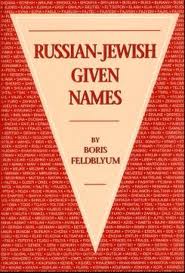 Back in the Toronto of 1913, when my future grandfather Isaac Naftolin announced his intention to marry my future grandmother Esther Arnoff, his parents Meir-Feivel and Etta Naftolin were said to have opposed the match on the grounds that the name Esther was too much like Etta and that such a coincidence would surely bring the couple hardship and bad luck. The families had come from Russia only a few years earlier, you see, and still carried around the superstitions of the Old Country in pekeles on their backs.

Fortunately for me and dozens of other descendants, love won out over the evil eye in this instance and my mother’s parents (z”l) remained happily married for almost 60 years. I had never read of such a peculiar superstition about names until I encountered Russian-Jewish Given Names: Their Origins and Variants, by Boris Feldblyum (Avotaynu, 1998). On page 23, we read:

“During the Middle Ages, it was thought that Jews with the same name should not live in the same town or permit their children to marry into each others’ families. It was even urged that either one should not marry a woman with the same name as one’s mother, or else the new wife should be required to change her name.”

If superstitions are persistent over the centuries, so are naming customs, as Feldblyum shows in this interesting foray into an under-examined subject. Since time immemorial, the main source of Jewish first names has been the full canon of the Hebrew Bible, known as the Tanakh.

According to Feldblyum (whose work is largely an expansion of a book by Iser Kulisher, published in Zhitomir in 1911), Jews first used foreign names during the Babylonian exile, and later took on names of Hellenistic and Roman derivation while each of these civilizations had their day. Greek-Jewish names include Alexander and Apollo; Roman-Jewish names included Agrippa, Iulianus, Marcus and Tiberius.

Like a stone rolling through history and gathering not moss but names, the Jewish people picked up more monickers from the early Christians, the Muslims, the Spanish Catholics, the Germans, and so on. It’s a wonder that we’re not all named Phobus, Herkules, Fidel or Merlin.

Feldblyum eventually brings us into the Polish and Russian provinces, providing lists of names that our ancestors gave their newborn children in various localities late in the 19th century. In that era the Russian bureaucracy held the opinion that any Jew using a given name in his private life that differed in any way from the name recorded for him (or her) in the official registers had committed a punishable offence.

“The practice of many educated Jews to Russianize their names, such as Gregory instead of Hirsch, Vladimir instead of Volf, etc., could now land the culprits in prison,” Felblyum writes. “In several cities the police brought actions against Jews for having adopted Christian names in newspaper advertisements, on business cards or on door signs.”

Officials of Russia’s czarist government apparently couldn’t grasp that Mojshe, Moshe, Moisej, Moshka and Movsha could be one and the same person and “wanted to tax, draft and fine poor Mojshe five times over,” Feldblyum explains, adding that Kulisher wrote his book to help the bureaucrats bring order to the chaos.

This book could be invaluable to genealogical researchers who need to know that Motel and Markus are variants of (the Persian name) Mordechai; that Lazar and Lipman are variants of Eleazar; and that names like Theodor, Fyodor, Dorothy, Gottlieb, Bogdan and Todros (and, for that matter, Netanyahu) are all variants from different languages of the Biblical name Netaniya, which means “God’s gift.”

After providing a didactic overview of Jewish names throughout history, the book provides a list of more than 3,000 names used in Russia, including their known derivations. The book also gives citations showing where certain names first appear in the Bible.

There’s a certain erratic quality to Russian-Jewish Given Names. For instance, the meanings of names are offered only intermittently, a peculiar form of transliteration is used, and one is never really sure where Feldblyum leaves off and Kulisher begins. Also, there’s no explanation of how the names were gathered.

Still, this an interesting book and one that may be useful in solving a range of onomastic mysteries that may impinge upon many genealogical questions. ♦