From the Toronto Evening Telegram, November 2, 1928 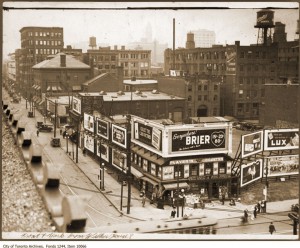 John Heenan, veteran employee of the Walker House, whose trim grey uniform, faced with vivid scarlet, has before now been mistaken by United States’ visitors for the full-dress regalia of a field-marshal, knows more about the history of lower York Street than any other citizen whom The Telegram has been able to discover.

And the reason for this is that better than forty years ago Mr. Heenan found employment at the old King’s Hotel, on the northeast corner of Front and York streets, since when, save for a brief absence in the United States, his daily work has kept him within a stone’s throw of the one-time famous hostelry where he earned his first wage in the city of Toronto.

With The Telegram, Mr. Heenan chatted over the changes which have taken place in the neighbourhood since 1882, the year he came to Canada from his native County Mayo. But though there has been many a change in York Street, and ramshackle frame stores and houses have given place to modern office buildings, there is no hint of change in the rich brogue with The Telegram’s informant brought with him from the Ould Sod, a fact of which Mr. Heenan in consciously proud.

“Do I remimber pwhat the street looked like whin I first clapped eyes on it?” he said in answer to The Telegram’s query. “Indade Oi do. Will youse look over there, now?” He waved his hand in the direction of the two-storey frame structure on the opposite corner. “Ah, but thout was the foine place whin first I knew it,” he went on. “That was where I had me first job in Toronto, tending bar for Johnny Riggs. ‘T was right in there — the ould King’s Hotel.

“An’ pwhat a trade they did there at lunch hour — though in thim toimes they were not afther bein’ so ginteel as they be today — for they called it dinner. Do yez know that as many as siven hundred folk — siven hundred! think o’ thot now — wud sit down to dinner in the hotel ivery day. An’ pwhat did they pay, d’ye suppose? Twinty-foive cents: thot’s all; an’ they got a meal that couldn’t be bate today for eight toimes the price.”

Mr. Heenan’s eyes twinkled reminiscently. “An’ Oi’ll tell yez something else. Ould Johnny Riggs threw in a glass of beer wid the meal — rale good beer, it was too.”

At the speaker’s suggestion, The Telegram walked across the street to the northeast corner, where still stands a part of the structure which two generations ago had been the eating rendezvous of thousands of Toronto’s premier business men. Mr. Heenan indicated the vacant plot to the east and north of the old hostelry.

“Thot was where Harry Piper kipt his woild animals,” he continued. “Piper’s Zoo, they were after callin’ it, and it cost a dime to get inside.”

According to Mr. Heenan, visitors saw a good deal for their ten cents, the stellar attraction being a huge stuffed whale which was displayed just inside the fence along Front Street. But there were also many cages which contained denizens of the wild and the jungle, whose roars often made the night hideous.

Walking along the east side of York to Wellington, Mr. Heenan paused every now and again to point out the changes in the various buildings since he first had known them.

Where now stands the Toronto Club building, a livery-keeper kept his horses and carriages, including a smart tally-ho, which was in great demand with the young bloods. Immediately south of the present club premises, a junk dealer had his yard and tiny office. South of this again on the corner of the narrow lane, was a hotel, run by a Frenchman. “But I misremimber his name,” said Mr. Heenan. “Anyway, he was a good fellow and well loiked by the folks around.”

Continuing north and repassing the Toronto Club, Mr. Heenan pointed a finger at the building on the northeast corner of Wellington and York. “That was where Dr. Thauburn lived,” he said, “and well do I moind the toime he was in practice there. Roight outside the door, he had two foine dogs, iron ones y’ understand, which were much admired.”

According to Mr. Heenan, at No. 71 Dr. Bond had a livery stable, which also enjoyed a large and distinguished patronage in the eighties. Just north of the livery stable was another hotel, flanked by the lane on the south side. Then came the Rossin House, now known by the more stately name of Prince George. When Mr. Heenan first knew York Street, the northeast corner of King and York was occupied by a hotel kept by Mr. O’Grady. The hotel still stands there at the present time, though many alterations have been made to it in the intervening years. 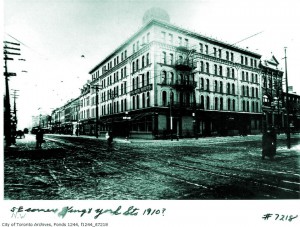 On the northwest corner, the Palmer House offered shelter, food and drink to the traveller; today it is an office building, which houses the headquarters of the Royal Winter Fair. Mr. Heenan’s memory didn’t go back to the days when this strategic downtown corner was occupied by the College Land Office, with Lt. Col Joseph Wells officiating as secretary. Later, according to Robertson’s Landmarks, it was used as a police station, and still later converted into a store.

The southwest corner, now occupied by the Iroquois Hotel, also has an interesting history, for long before Mr. Heenan’s time it was occupied by the Provincial Registrar, who had his offices there. Mr. Heenan knew it as a hotel, the Revere House. Walking south along the west side of York street, he pointed out the premises on the northwest of Wellington and York, now the headquarters of the Toronto Type Foundry.

“That was where the old American Hotel stood,” said Mr. Heenan. “It ran for a considerable distance west along Wellington, but it wasn’t as high as this brick building. I mind that it was built of wood and was just an ordinary looking kind o’ place.”

On the south corner lived a Mr. Hawke, the house being regarded as one of the handsomest in that part of the city. Today it is an office building, though the bay windows on the second storey proclaim the fact that it was once a residence. “See how thick the walls are,” said Mr. Heenan. “They were afther building in’ houses in thim days.” A few steps further, The Telegram’s informant came to a halt at a store, bounded on the south side by a narrow lane. 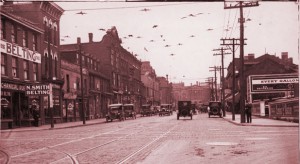 “Will you take a look at this wee bit of a corner,” he requested, “and what’s written on the side of the building.” The Telegram reporter looked at the place indicated and read on a signboard, badly in need of fresh paint, “Heenan’s Place.”

“Now, I’ll tell you how that came about,” went on Mr. Heenan. “This building here was the Hub Clothing store, and for eighteen years I worked there. An’ thin wan day the manager sez to me, he sez, ‘John, you’d better put your name up on the side of the building, so that the folks’ll know that the lane is called afther you.’ An’ I did; and there it is to this day. That,” said Mr. Heenan, with a sigh, “was twenty-eight years ago, and dear knows a lot has happened to this old wor-rld since thin.”

The block immediately south of the lane, running to Front Street, was where Bishop Strachan, rector of St. James, built a residence which was famed throughout eastern Canada. It stood in spacious grounds and for years was known as “The Palace.” With the march of years, the residence was converted into a private hotel, which was widely known as the Palace Boarding House. 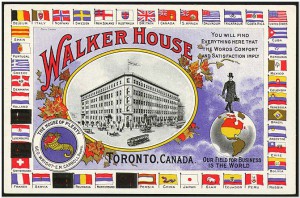 In more recent years, the Palace was torn down and a brick residence erected on the York Street front. This was first occupied by Mr. Thomas Mercer Jones, who was succeeded in its occupancy by Captain Strachan. Mr. Heenan recalled that soon afterwards it was purchased by Mr. David Walker, who founded the Walker House and used by him as an annex to the hotel. Today the southwest corner of the block houses the head offices of the W. R. Johnston firm.

Robertson’s Landmarks, in recording the directory of York Street in the year 1846, states that the numbers on the east side were even, a reversal of the present system. No. 48 was then occupied by Fred Bickerstaff, a painter, while his next door neighbour was a hotel keeper, who kept the William III Inn. 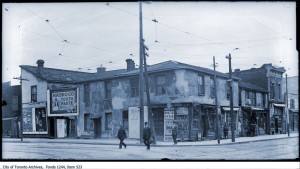 The thirsty didn’t have far to walk in those days, for just five doors north of the former hostelry was another saloon, the name of which is not recorded, and two doors north of this again was a hotel kept by George Runnick.

The west side of York Street, started at No. 3, at the waterfront, and ran to 109. It is interesting to note that two ministers at that time had residences on the street. Reverend William Rentout, of the Presbyterian Church, lived at No. 33, and Reverend R. Cooney, British Methodist, at No. 97. For close neighbours, they had two physicians, Dr. John Rankin, M.D., residing at No. 101, and Dr. Robert Hornsby, at 107.

“But all that was long before my time,” said Mr. Heenan, “and none of them were there when I first set foot on York Street. But anyway, close on forty-wan years I’ve known the old street, an’ that’s a wee bit of a spell, whin you come to think of it.” ♦