From the Toronto Evening Telegram, January 2, 1929

◊ Note: This is an interesting, albeit uneven story that focuses more on two prominent rabbis of the city than on the younger generation of Jews in the professions. While Dr. Bessie Pullan Singer gets no further mention than beyond the subhead above, the article does name Canada’s first Jewish dentist, Dr. Edward Elkan. Its population numbers are somewhat suspect; according to well-established census figures, there were approximately 3,000 Jews in Toronto in 1901 and slightly more than 18,000 a decade later in 1911.

With the ushering in of the twentieth century, the younger generation of Jews turned towards higher education as an outlet for their ambition. And in the course of a few years Jewish scholars began to make their appearance of the campus of Toronto University.

Medicine, law, science all claimed a generous quota of Toronto-born members of the ancient race, many of whom rapidly won their way to distinction in their chosen professions. Here again was evidence of their new environment, for, in embarking on professional life, they broke away from the traditional old country custom of following the same line of business as their parents.

In 1900, a group of women calling themselves the Daughters of Zion orgainzed and valuable work. Though their main interest was centred in the cause of Zionism, they found time to do considerable charity work among their less fortunate co-religionists. It was in this year that the local Jewry sustained a severe loss by the death of A. D. Benjamin, he who had founded the Holy Blossom Fund.

It is interesting to note that the beginning of the present century, the number of Jews in Ontario had increased to 16,401, and of this number 9,000 were residents of Toronto. Ten years prior to this date there were but 6,414 Jews in Canada. The pogroms and the hardships suffered by members of the ancient race in Europe were largely responsible for the growing immigration to this country in the last few years of the nineteenth century.

It was at this time that there came to Toronto one of the most outstanding Jewish figures in the history of the city. That was the late Rabbi Solomon Jacobs, who answered a call to the pulpit of the Holy Blossom Synagogue. Within a short time after his arrival he had endeared himself alike to Jew and Gentile. He preached from Christian pulpits as well as from his own, and regardless of race or creed his aid in behalf of any charitable undertaking never was refused.

Intensely patriotic, he held his British citizenship in high esteem, and during the war officiated as chaplain in various military camps. And he was immensely popular with all ranks. During the time he served as rabbi of Holy Blossom, the leadership of the congregation was held by Frank Dr. Benjamin, brother of A. D. Benjamin. 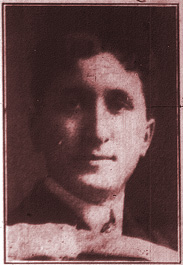 The first Jew to register for medicine at Toronto University, probably was Dr. A. I. Willinsky, who, after graduating from Jarvis Collegiate in 1902, entered Varisty. Four years later he graduated in biological and physical science with first-class honours.

His desire for post-graduate work took him far afied, and for a while he studied in Dublin. And then in turn he visited Vienna, Paris, Berlin and London, so that it was not until 1910 that he returned to this city and set up in practice for himself. He now is attached to the staff of the Western Hospital.

Another prominent figure in the religious life of the city made his first appearance here in 1904. He was Rabbi Jacob Gordon, who preached at the Goel Tzedec Synagogue at University avenue and Elm street. Rabbi Gordon was held in great esteem by his co-religionists and was most active in all charitable work.

The site of the present McCaul street synagogue was purchased in the following year. Originally a Methodist church, as soon as the transfer had been recorded, the interior of the building was renovated and redecorated.

Another event of importance during 1905 was the graduation of Dr. Edward Elkan, the first Jew in Canada to get his degree in dentistry. He studied at the University of Toronto. He was alo the first Jewish scholar to graduate from the U. of T. Schools.

During this year there was another upheaval in the European countries, and Jewish refugees began to pour into Canada, and Toronto soon became the home of several more thousands. Rabbi Jacob Gordon did much towards alleviating the sufferings of these unfortunate immigrants, as did Rabbi Solomon Jacobs.

The Jewish Press dates back to 1891 outside of Toronto, and it wasn’t until 1906 that a Jewish periodical was published in this city. It was first “The Jewish Weekly,” giving news in Jewish and English of local interst to the race. It continued for some years, became a semi-weekly, and in later years a daily.

Up until this year Jewish children were taught Hebrew, and translation of the “Talmud,” and the form of prayers in private homes of teachers. They were charged a monthly stipend, ranging from one dollar up. Now with the newcomers to this city, the members of the various synagogues realized there was an urgent need for a place where the little ones could go to learn and study Hebrew. ♦