One hundred years ago, in September 1908, British writer Israel Zangwill’s influential play The Melting Pot premiered in New York, simultaneously winning widespread popular acclaim and sweeping pans from the critics. When Theodore Roosevelt saw it, he leaned over the edge of his presidential box and exclaimed “That’s all right!” in great apparent satisfaction. But Roosevelt was also of two minds about the play, and later invited Zangwill to lunch at the White House and chastised him for his poor depiction of American family values.

Today, few people have any idea what The Melting Pot was about; if it is remembered at all, it is chiefly for popularizing the phrase in its title as a metaphor for American society. Like metal type that is tossed into a pot after use to be melted and recast anew, America in Zangwill’s depiction was a giant crucible in which immigrants of every stripe are thrown together, happily losing their ethnicity as they meld into stereotypical American citizens. (It is often observed that Canadians prefer a “cultural mosaic” model of citizenship that seeks to celebrate ethnic diversity rather than obliterate it.)

The Melting Pot is essential a clever and highly topical recasting of the Romeo and Juliet story. The protagonist, David Quixano, is a Russian Jew who comes to America after losing his family in the Kishinev pogrom of 1903, a fervent believer that the hatreds and ethnic animosities of Europe have no place in America.

“Here you stand in your fifty groups, with your fifty languages and your fifty histories and your fifty blood feuds and rivalries,” he says of the crowds at Ellis Island. “But you won’t be long like that, brothers, for these are the fires of God you have come to! . . . . A fig for your feuds and vendettas! Germans and Frenchmen, Irishmen and Englishmen, Jews and Russians — into the crucible with you all! God is making the American!”

Vera Revendal, the Juliet character, turns out to be the Christian daughter of the Kishinev general who annihilated David’s family. After the latter admits his guilt, David forgives him his genocidal trespasses, and, well — all’s well that ends well. If this conclusion seems terribly wrong and misguided, it is only because we’ve learned, in the post-Holocaust age, not to automatically extend blanket immunity to evil-doers upon the cessation of conflict as we would to kindergarten pupils when the bell sounds at the end of a schoolyard recess. Simon Wiesenthal’s pithy phrase, “Justice, not vengeance,” seems to explain it all.

The New York Times found The Melting Pot to be generally “forced and false — as false as most of Mr. Zangwill’s characters, which are stuffed with sawdust and words.” As to Roosevelt’s apparent endorsement of the play, “This merely goes to prove that even a President may be mistaken. ‘The Melting Pot’ is . . . in fact, a very bad play viewed from almost any point of view.”

The Melting Pot made a splash because Zangwill, whose first novel Children of the Ghetto became a publishing sensation upon its appearance in 1892, was long was adept at making splashes in the literary world. He knew how to turn a phrase and to appropriate
deep philosophical material for lightweight treatment. As a novelist he was as Victorian and conventional as Charles Dickens, and as ironic and cynical on the Jewish character as Mordecai Richler. In his few plays, he explored intellectual ideas in the fashion of H. G. Wells or George Bernard Shaw, but was often scolded for his incessant preaching and silly prophesying. Throughout his career, he typically embraced ideas only to cast them off a few years later with great fickleness.

Born in Jewish East London in 1864, Zangwill kept notebooks full of the sayings, situations and idiosyncracies of the people he encountered, whose stories became the basis of Children of the Ghetto and his other “ghetto” novels. His stage version of the book supposedly presented the mainstream stage in England with its first treatment of Jews as more than the demeaning stereotype of hook-nosed pedlars in dirty clothes. Still, Zangwill often ridiculed his co-religionists better than anyone. He shared with many Christians the view that Judaism was an outmoded religion and that the modern Jew outside of the old ghetto was “like a mother who clasps her dead child to her breast and will not let it go.”

In 1895, when he was at the height of his new literary celebrity, a man approached him and said, “I am Theodor Herzel. Help me to rebuild the Jewish state.” Zangwill helped Herzl set up his first London address; two years later, he visited Eretz Israel and attended the first Zionist Congress in Switzerland. He devoted much of his energies to Zionist activities, lecturing and lobbying for the establishment of a Jewish territory. However, he did not insist that the Jews had to return to their authentic homeland in Palestine, but that they could be equally happy anywhere in the world, be it Texas, Saskatchewan, Uganda, South America or Outer Mongolia.

When the Seventh Zionist Congress formally rejected the Uganda option in 1905, Zangwill split with the Zionists and founded an organization of his own, the Jewish Territorialist Organization. Its aim was to create a Jewish homeland wherever a vacant territory might become available. After the Balfour declaration, he returned briefly to the Zionist fold but again split. A man of many quirks and contradictions, he may have been the model for the character in Philip Roth’s 1993 novel Operation Shylock: A Confession, about a “reverse Zionist” who tries to persuade the Jews to leave Israel and return to the Diaspora.

A sparkling lecturer who was always in demand, Zangwill found this did not always work in his favour. In 1923, he received the reprobation of many for declaring political Zionism dead to a capacity crowd at New York’s Carnegie Hall. Before his death in 1926, he must have been disappointed to see all of his efforts to establish a Jewish territory come to naught. Ironically, his very life discredited the ideas he presented in The Melting Pot, for he remained tied to Jewish causes to the day he died. ♦ 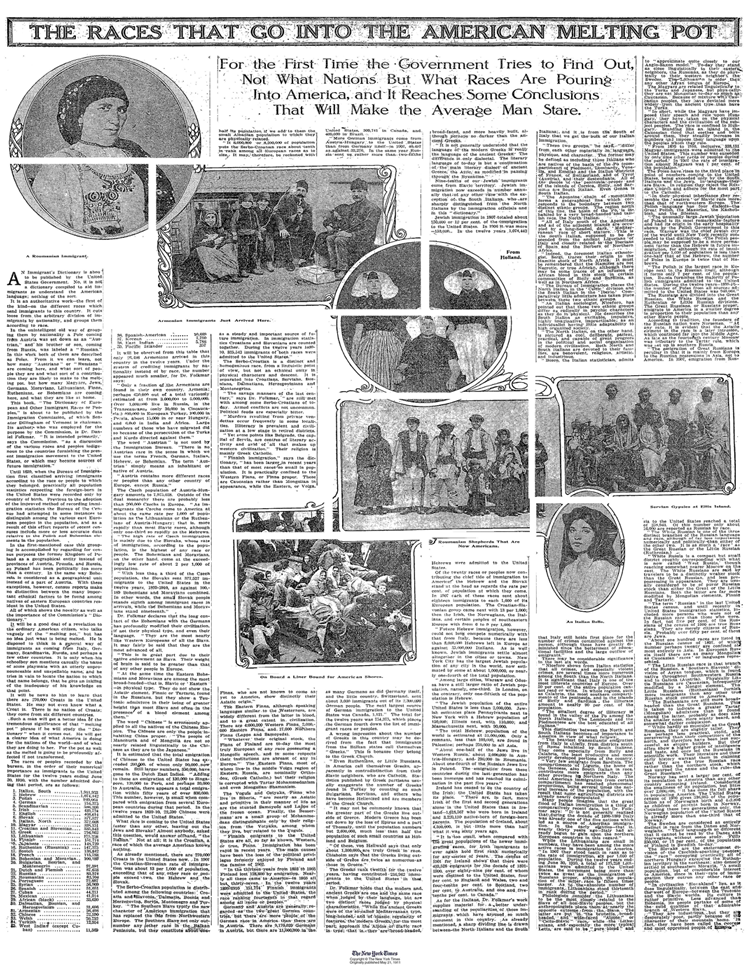