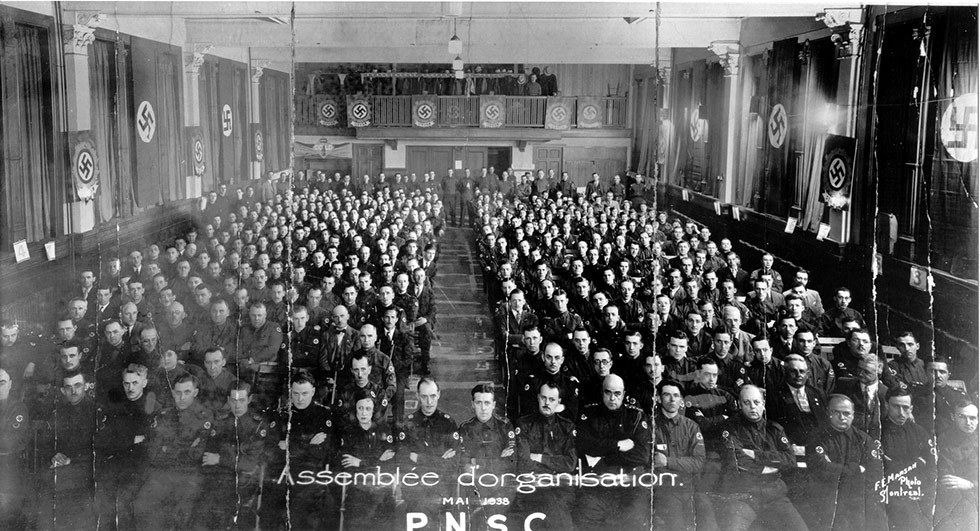 As reported in The Montreal Gazette (1938)

This shocking photograph was taken at a fascist rally on Wellington Street, Montreal, on May 11, 1938.

Inspired by Germany’s National Socialist (Nazi) Party and Italy’s Fascists, Quebec’s National Socialist Christian Party was a strongly antisemitic and anticommunist group led by Adrien Arcand. Party enforcers were called blueshirts, after Hitler’s brownshirts and Mussolini’s blackshirts. An estimated 250 party members attended the rally, some 60 of them in blue shirts.

According to the Montreal Gazette, a near-skirmish broke out at the event after a fascist speaker charged that the labour unions were “falling into the hands of the Jews,” and a man in the audience rose to protest. “He was shouted down, and several comrades scattered throughout the audience joined him in objecting to the speaker’s remarks. There was considerable shouting back and forth, the chairman appealed for order and fascists in the vicinity of the objectors tried to lead them out,” the Gazette wrote

Tthe blueshirts ejected about a dozen of their opponents from the hall before physical violence could erupt.

In 1938 the party joined with other groups to form the National Unity Party. A postcard circulated by the Party around this time showed a doorkey with a swastika, with the caption, “La clef du nouveau Canada.”

Not long after the Second World War began in late 1939, the National Unity Party was banned and Arcand and some of his followers were interned as security risks. Arcand, who proclaimed himself the Canadian Fuhrer, would later assert that his internment was at the behest of the Canadian Jewish Congress. 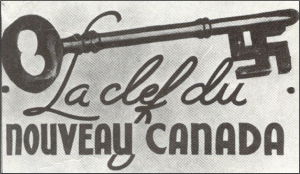 After a Quebec journal ran a highly flattering profile of Arcand in 1961, the Canadian Jewish News noted: “Arcand is given the full ‘personality treatment,’ photographed at his easel seeking and finding serenity in painting, as do Sir Winston Churchill, ex-President Eisenhower, and other great personages of history.”

In the postwar era, Arcand became a fervent Holocaust denier and, as such, was a primary mentor to Ernst Zundel, who carried his evil legacy down to the next generation. ♦