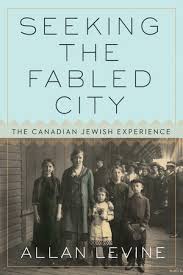 Proficient, prolific, and preternaturally talented, Winnipeg-based historian Allan Levine has produced a robust new history of the Jewish experience in Canada that seems both compelling and fresh.

Seeking the Fabled City — the title comes from a line by the late Montreal poet A. M. Klein — goes over the familiar ground trod by Gerald Tulchinsky (Canada’s Jews: A People’s Journey), Irving Abella (A Coat of Many Colours: Two Centuries of Jewish Life in Canada) and others.

An expert and discerning historian, Levine may be likened to master film documentarian Ken Burns in his dynamic approach to storytelling. In one passage he’ll zoom in on a fascinating episode or character profile, then offer an alternating passage in which he pulls back to give us a more general picture.

It’s almost a given that the book will document many incidents of antisemitism from earliest days to the present. Other subjects and themes include the turbulent conditions that brought us to Canada; how we lived once we got here; our political passions from Zionist to socialism to communism to good old-fashioned British-Canadian patriotism; and our slow but steady path to assimilation and integration into mainstream Canadian society and its once-restricted professional spheres.

Levine frequently weaves together colourful and telling details from diverse and distant cities like Halifax, Montreal, Toronto, Winnipeg and Vancouver. The cumulative effect is to highlight the parallel threads that bind our national community together, emphasizing the unity of our collective experience as Canadian Jews.

In coming to Canada, Jews were seeking a “fabled city” where they and their children and grandchildren could not only survive but prosper, he writes. “There are only two characteristics which most Jews have in common. One of them is a determination to survive, if possible, and the other is a basic sense of insecurity.”

That observation was made not by Levine, but by a character quoted from Gwethalyn Graham’s 1944 novel Earth and High Heaven, one of the first works of fiction published in Canada to address antisemitism.

Levine demonstrates something that has become all too clear in the Trump era, that history is a dynamic and subjective medium that changes according to our shifting perceptions. For example, Ezekiel Hart, duly elected to the Quebec Assembly in 1808, who could not take his seat because he would not swear an oath “on the true faith of a Christian.” While earlier historians were quick to tag the episode a clear case of antisemitism, Levine adds significant nuance to our understanding. “Anti-Jewish feelings did play a part; as a Jew, Ezekiel was an easy target,” he writes. “Yet Hart was also caught up in the political power struggle that had gradually erupted between the English and French members of the assembly.” 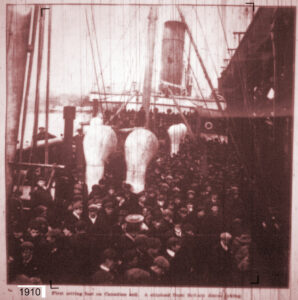 Indeed, Jews were sometimes seen as a desirable leavening agent amidst the growing Canadian populace. In 1882, when Alexander Galt advised Prime Minister John A. Macdonald that the Russian Jews were “a superior class of people,” Macdonald concurred: “A sprinkling of Jews in the North West would do good. They would at once go in for peddling and politics and be of much use in the New Country as Cheap Jacks [hucksters] and Chapmen [peddlers].”

Later, of course, during the era now known as “none is too many,” the pendulum swung back with a vengeance. Levine lays out succinct comparative statistics to convey just how appallingly bad Canada’s restrictive anti-Jewish immigration policies really were:

“[B]etween 1933 and 1945, Canada allowed approximately 5,000 Jewish refugees (perhaps a few thousand more) into the country, compared to 200,000 permitted into the United States, 70,000 into Britain, and 25,000 into China. Even Bolivia and Chile made room for 14,000 each. In 1938, the Toronto Telegram, which had opposed Jewish immigration, summed up the situation in a statement that the government and a majority of Canadians agreed with: ‘It cannot be denied that Jewish people as a class are not popular in Canada.’”

As evidenced in previous works such as Coming of Age: A History of the Jewish People of Manitoba, and Toronto: Biography of a City, Levine is a master at compressing and integrating huge amounts of information coherently into a sweeping narrative; his prose is a model of concision. And refreshingly, his concrete, non-scholarly language highlights that he is writing for the people, not the academy.

His presentation of Toronto’s “kehillah controversy” of the early 1930s — which involved Jacob Gordon, Joseph Weinreb and Yehuda Leib Graubart, three of the city’s leading rabbis — is a good example of how well he clarifies murky historical points. Although I had read previous descriptions of this dispute, I admit I had never fully grasped the details until I read Levine’s account. Put simply, a provincial judge convened a rabbinical tribunal that upheld Gordon’s and Weinreb’s authority over kashrut, and the rebellious Graubart, for better or worse, was obliged to accept that judgement.

Levine also provides what may be the first detailed account of how the Canadian Jewish Congress (CJC) and other time-honoured Canadian Jewish corporate structures mysteriously morphed, through some behind-the-scenes legerdemain, into the present CIJA (which itself morphed from the Canadian Council for Israel and Jewish Advocacy into the Centre for Israel and Jewish Affairs). The catalyst was the 2002 melee at Concordia University in protest of Benjamin Netanyahu’s visit, which prompted a cabal of determined Jewish “machers” to machinate for a more proactive, pro-Israel organization.

A very admirable goal, but many complained that their tactics were less than democratic and amounted to a sort of corporate coup d’etat. And why dispose of a much-admired, time-honoured brand like Canadian Jewish Congress for a bland and confusing acronym like CIJA? Levine’a discussion may not be the last word on the matter, but it offers a good groundwork for future historians to build upon or tear apart as they will.

Offering a rich, nuanced and thoughtful tapestry, Seeking the Fabled City is a welcome addition to our literature on Canadian Jewry. ♦