Below the southwestern corner of Jerusalem’s Temple Mount, near the archaeological feature known as Robinson’s Arch, lies a random assortment of massive stone building blocks.

Though you might not realize it at first, these blocks help bring history to life. They were once part of a parapet wall along the perimeter of the Temple Mount. One day in 70 CE, Roman soldiers intent on destroying every vestige of the Jewish Temple pushed the huge stones over the edge.

For nearly two millennia, they have lain where they have fallen.

Illustration From The Land and the Book by W. M. Thomson, published 1869.

One of the stones carried part of an ancient Hebrew inscription — “To the area of the trumpets” — which evidently was meant to give directions to Temple shofar-blowers.

Since this is the only inscription discovered from the Second Temple, it was removed to the protection of the Israel Museum and replaced on-site with a near-identical replica.

The stones seem to have fallen into an ancient street, whose authentic paving stones are still roughly in place. Due to the deterioration of the underlying drainage system, however, some of the pavement stones have collapsed.

These historic remnants of the Second Temple period were only uncovered in the recent past, after the Six Day War. The period since 1967, which has seen the reunification of Jerusalem, has been one of extraordinary archaeological discovery and achievement in Israel.
Robinson’s Arch, that bit of Herodian masonry that protrudes from the Western Wall, is presently about 18 metres above ground level. It was at ground level in 1968, and considerably below that in 1835 when the American Bible scholar Edward Robinson (1794 1863) recognized it as the beginning of an arch. Israeli archaeologists have carefully examined and removed centuries of rubble. 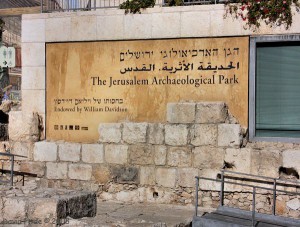 Historians have determined that Robinson’s arch was part of a causeway over the Tyropoeon Valley to the Upper City, meant to save Temple worshipers an arduous descent and climb to get to the Jewish Quarter. They have also determined that the nearby series of supports for the causeway-bridge once housed four Herodian-era shops.

Around the corner, on the south side of the Temple Mount, is the set of stairs that led up to the southern entrance to the Temple. Portions of a double and triple gate are visible, partly blocked off by layers of architecture from later periods. There are also remains of several Ummayad-period palaces, mikvehs, a medieval tower, a Byzantine building and other structures. (It’s best to visit the Park with a knowledgeable guide, who can illuminate this complicated history.)

Also on the site is the Davidson Center, which occupies a restored Umayyad palace. The Center offers intriguing exhibitions and illustrations that reflect the Second Temple era, the Roman and Byzantine era, and the early Muslim period.

You can also learn about archaeology and Jewish history here. A short documentary film presents the story of 150 years of excavations in the precincts of the Archaeological Park, beginning with the excavations of the Palestine Exploration Fund in the 1850s. A 10-minute digital video describes Jewish pilgrimage to Jerusalem during the Second Temple period.

For many, the piece de resistance of the Davidson Center, and perhaps the whole Archaeological Park, may be the Virtual Reconstruction Model of the Herodian Temple Mount. Visitors are shown a convincingly realistic portrayal of the Temple, projected onto a screen by a powerful supercomputer and a high-resolution projection system.

Admission to the Jerusalem Archaeological Park is 12 NIS for adults. To get a better idea of what the Park is all about, visit its impressive website at www.archpark.org.il/ ♦