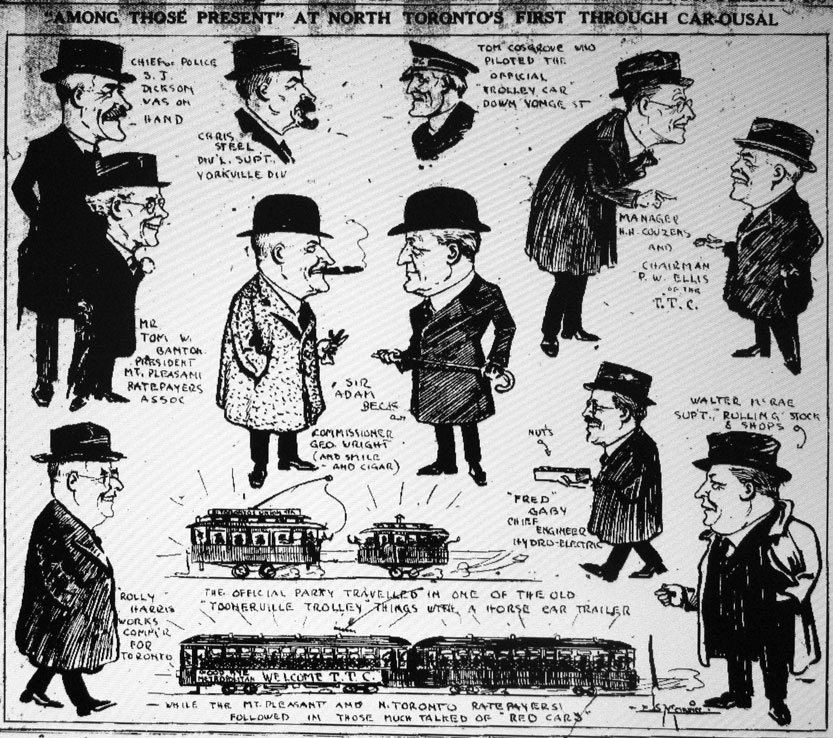 Everybody living in North Toronto seemed to be lining Yonge street last night to celebrate their release from the transportation troubles which have afflicted them for ever so long. This morning they could get aboard a car at Stop 36, the northern limit of the city, and ride down right into the city for one fare and without transfer. Only those who have been up north can fully appreciate the boon.

The “celebration” last night wasn’t confined to the new section alone. There was a procession first down Yonge street and around the Scott street loop, and then straight up to the “end of steel.” The cars used ranged from “old 64,” built more than 30 years ago, to one of the latest “red cars.” 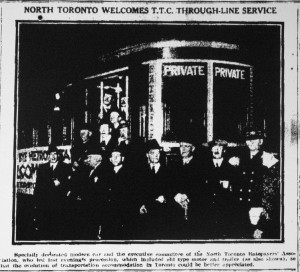 “This is a real Thanksgiving for North Toronto,” said P.W. Ellis, chairman of the TTC last night, while all the participants in the procession were waiting to board the cars. “I moved up here to Bedford Park with my wife and children 32 years ago and immediately began working for better transportation for North Toronto. . . .”

Sir Adam Beck, the one man who was responsible for the removal of franchise fetters in North Toronto was along with Chief Engineer Fred Gaby of the Hydro-Electric, present in the official car.

The old motor car they used was No. 306, and was built by the Toronto Railway Co. in 1892. It has a body 18 feet long and was operated for some years without front or rear vestibules. The last occasion on which it operated in the service was the 30th of September, 1921, during the rush hours. The old trailer used was No. 84 and was built by J. M. Jones, of West Troy, about the year 1887 as a two-horse car. It has a 16-foot body and was taken over by the city in 1891 from the old Toronto Street Railway.

Later it was taken over by the Toronto Railway Co., so that the city have really twice purchased this same old relic. When the electric system was introduced this car was converted into a trailer and used on the Dundas route until September 18th, 1921, when it was used as a temporary office for the bus department of the TTC.

The trains proceeded down Yonge street, where they attracted much attention. Passing North Toronto CPR Station and the CPR Building downtown, Ald. Burgess led in three rolling cheers. The car at King and Yonge streets picked up “Jimmy” Robertson, with several pink Telys, who proceeded through the car selling them. The Telegram reporter was cheered and Ald. Burgess requested him to join in a duet, “Dear Old Pals.”

On reaching Woodlawn avenue the people in the front cars cheered until they could not speak. From this point north to the city limits the street was lined with cheering residents. The car looped at Stop 36 and returned to the old town hall, where all passengers, officials of the TTC, City Hall and City Council held a short impromptu meeting.

W. L. Cuttell, president of the North Toronto Ratepayers Association, took the chair and said: “The very best way to celebrate this great event is for every one to sing the Doxology. A week ago not a citizen expected the red cars would start tonight, but the work on Yonge street has been so rapid that it was made possible.”

Controller Hiltz had “recollections of coming to this hall when everyone was not in such good humor” . . . .

Mr. Cuttell contended that the Ratepayers’ Association had some hand in bringing about what they were celebrating. “Our deputations to the City Hall and Parliament Buildings have brought results,” he said.

“I have waited 17 years for this night,” said E. V. Donnelly, “and I am thankful it is over. The people of Toronto don’t realize the good work the TTC are doing, but we will show them our appreciation next week.”

W. G. Ellis stated that the effort was put forth in 1894 for what they had now accomplished. He said the Ratepayers’ Association was not a political one, but went after measures, not men.

Commissioner Chisholm announced he had received orders to go ahead with the lighting system, the same as on Danforth, from Wood street north.

Ald. John Winnett, Commissioner R C Harris, Ald. Hunt, Burgess, Beamish, Hackett and Plewman and Chief of Police Dickson praised the TTC, and agreed that the residents had reason to be proud. Owing to the banquet next week, the TTC officials were not going to be asked to speak, but at the last H. H. Couzena was called and thanked the residents for their praise, but said his staff had earned it.

J. McCullough, traffic superintendent of the TTC, was in charge of routing of the parade.

Although the motormen encountered a greasy rail this morning, the reports of the service are that it has been very fair. ♦

◊ For more information, please visit A Brief History of Transit in Toronto 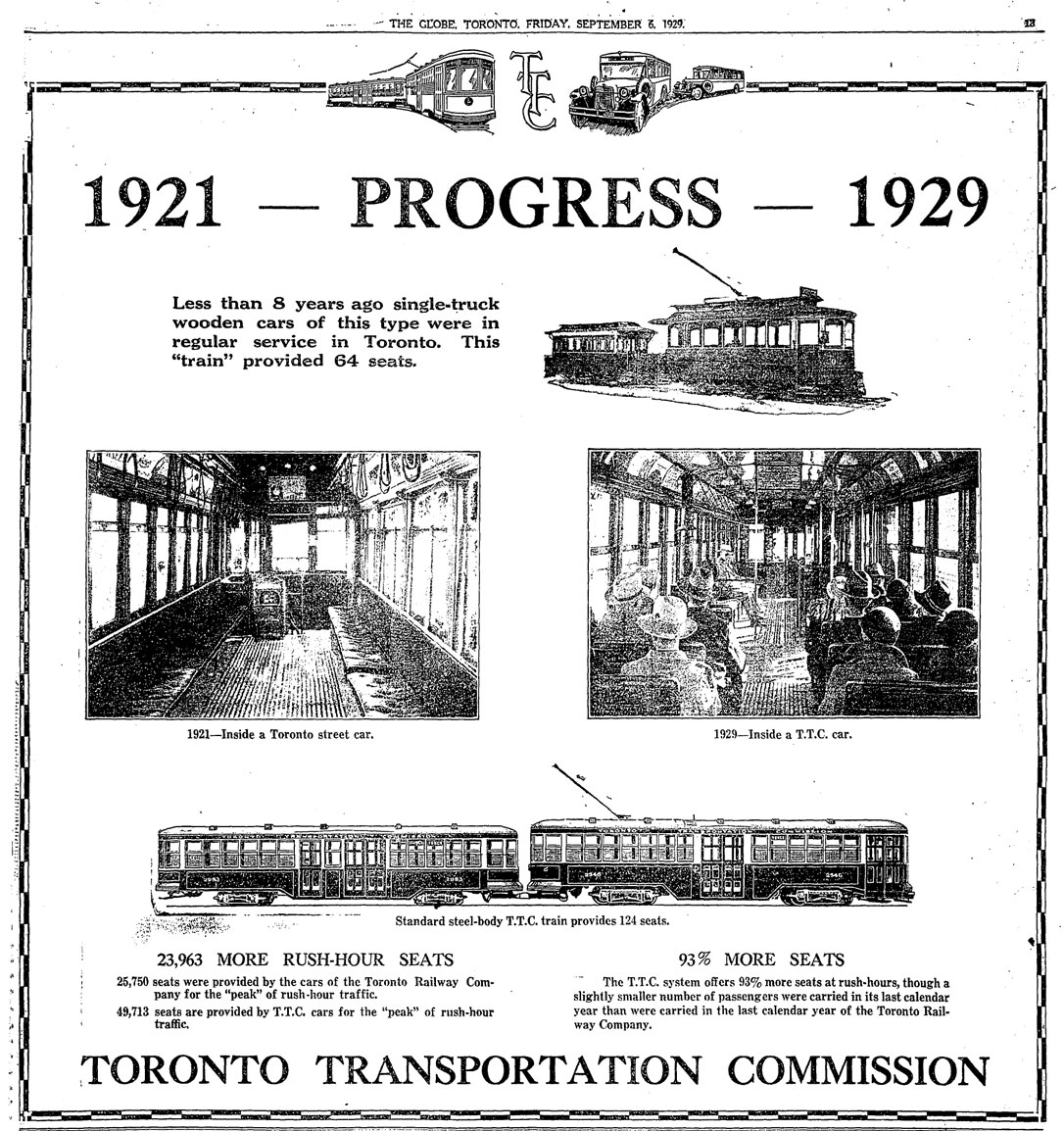