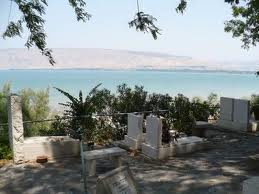 “We’re just about to cross the River Jordan,” says our guide, Mike Rogoff, as our van approaches a bridge traversing a gulley of greenery. “So don’t blink and don’t sneeze, or you’ll miss it. This is not the St. Lawrence. The people who wrote those marvelous spirituals — ‘the River Jordan is deep and wide’ and so on — well, they had obviously never been here.”

The day is predominantly warm and sunny. We are on the north shore of Lake Kinneret, the fabled Sea of Galilee, driving eastward along the top of the harp-shaped lake. Earlier, we had spent the morning viewing the remains of the Byzantine-era synagogue at Capernaum and some Biblical-era sites on the northwestern shores. Now we are crossing Israel’s famous river, whose legend apparently much exceeds the reality: today, by Canadian standards, it is a mere stream, even at the spot to the south where Joshua and the ancient Israelites entered the Promised Land.

The eastern side of Lake Kinneret is the more picturesque, yet fewer visitors see it, Rogoff says. As we drive along the lake, the cliffs of the Golan Heights soar above us to our left, while some mud flats and green patches stretch to the right, on territory surrendered by the Kinneret. As a result of extensive droughts and water usage, the lake has receded to record low levels in recent years. As the country prays for peace, so, too, does it pray for rain.

Our guide points out a few moshavim and kibbutzim, including Kibbutz Ein Gev, which was founded in 1937 and boasted former Jerusalem mayor Teddy Kolleck as an inhabitant. Before Israel captured the Golan, they were “within spitting distance” of Syrian military outposts and “the Syrian soldiers would take potshots from the ridge about 1,500 feet about the kibbutz,” Rogoff says.

“The people who can be quite liberal with the Palestinian issue can be quite hard-line with regard to giving back the Golan Heights to Syria,” he says.

We pass some popular kibbutz hotels and an ostrich farm. Soon we reach the bottom of the lake and the spot where the river waters re-emerge from the lake to flow southward to the Dead Sea. As we cross the Jordan again, Rogoff points out a modern baptismal facility, used extensively by Christian pilgrims: it is modern enough to be wheelchair-accessible. The area is also dotted with historic kibbutzim such as Degania (established 1911, the second oldest in the country) and the neighbouring Kinneret Kibbutz. Rogoff is an excellent guide, full of knowledge and surprises; here, he pulls to the side of the road, announcing that he’s going to show us something that probably none in our party of four has seen before.

“Please follow me,” he says, and we pass through the gates of Kinneret Cemetery. “This is a very beautiful cemetery,” he begins, pointing out the graves of several historic Zionists as well as young soldiers from the local kibbutzim who fell in the War of Independence: the tombstones inscriptions touch one’s heart. In the earth in front of one headstone lies a soldier’s helmet that “has been sitting there for 50 years, and no one’s tried to walk off with it,” he says.

We walk further into the well-treed grounds, which once abutted the lake and are now separated from it by a weedy expanse; the view, however, is still gorgeous, and the wind sweeps gently over the wild wheat as if it were the strings of a harp. He stops at a tombstone identified by the single Hebrew name Rachel, and we gather around.

“This is the most famous grave,” he says. “You see how it is covered with stones?

Then he tells the story of Rachel, who was born in Russia in 1890. Imbued with Zionist ideals, she came to Palestine, settled on Kibbutz Degania and began writing Hebrew poetry that “even today, has a freshness and a flavour that speaks to the younger generation.” Unmarried, she died here of tuberculosis in 1931.

“She had a great love affair with the area, and it all came out in her poetry. She spoke with great passion of her Kinneret and her Golan. She talked about ‘Grandfather Herman’ with his thatch of white hair. She also wrote about how she wanted children, but she never had any. Her poetry became more bitter and more personal, but no less beautiful.”

He opens a small metal compartment beside the grave and removes a book of Rachel’s poetry, chained there for visitors. He translates a short poem, evoking images that are poignant and pure, and without saying another word replaces the book and bids us follow him from the cemetery.

Back in Canada, I found this poem by Rachel, translated by A.M. Klein:

THE CHILDLESS ONE
Would that I had a little boy,
A wise lad, and with raven locks,
To take him by the hand, and walk
Slowly upon the garden-walks.

And “Uri” would I call my son,
A delicate name, and full of joy,
A name that is a sunbeam — such
The name of my small winsome boy.