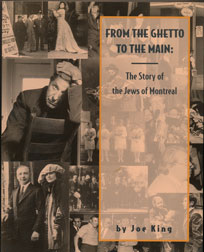 From the Ghetto to the Main: The Story of the Jews of Montreal, by Joe King, is a masterly treatment of more than two and half centuries of Jewish history in what was once the largest Jewish community in the Dominion of Canada.

King sets the stage for his subject in five chapters that sketch the early history of Jews in New France and early Quebec. The first known Jewish subject to set foot in this territory was Esther Brandeau, who posed as a man and who refused to convert when discovered.

Eventually narrowing his focus upon the Montreal community, King discusses early landowners such as Lazarus and Phoebe David, whose son, David David, became the first Jew born in the city (about 1764). 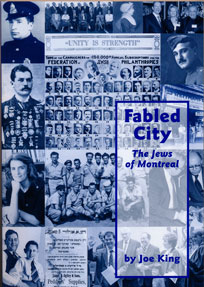 As it approaches the modern era, the narrative touches upon multifold aspects and themes as it weaves a rich and colourful story. King excels at presenting the contours, aromas and flavours of the modern community in chapters such as “The Shmata Business”, “Briskets and Bagels” and “From Rags to Great Riches: The Bronfman Story.” The text is enlivened by many illustrations and sidebars.

The final chapters (including the expressively titled “Exodus 401”) deliver a denouement reflective of Quebec’s politically troubled times. While the Montreal Jewish community has slipped demographically, King’s highly impressive opus shows that the community remains vibrant and as unique as the city itself. Published by the Montreal Jewish Publication Society.

As a staff writer for the Keneder Adler, Montreal’s Yiddish-language newspaper from the early years of the last century, Israel Medres penned innumerable short, informative essays on various aspects of Montreal Jewish life. These he collected and published in Yiddish in 1947 under the heading Montreal fun Nekhtn. 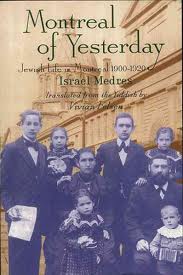 Recently Medres’s granddaughter, Vivian Felsen of Toronto, translated them into English for publication as Montreal of Yesterday: Jewish Life in Montreal, 1900-1920 (Vehicule Press).

Medres wrote about the problems of immigrants, religious differences, sick benefit societies, the Workmen’s Circle, the burgeoning Zionist movement, Yiddish vaudeville and theatre, the Jewish press, and the relative merits and demerits of working as a peddler, journalist, tailor or cloakmaker.

He gives a gripping thumbnail account of the trial of the antisemites Leduc and Plamondon, who were sued after making vile accusations against the Jews and the Talmud, and whose claims were eventually demolished in the courts.

Medres’s essays bring Yiddish Montreal to life. His description of a Jewish wedding rings with a simple comic truth, and his recollection of the tiny details of life lend richness to our mental picture of this generation of Yiddish-speaking immigrants to Montreal.

Medres’s prose sometimes reads like a story by Sholom Aleichem or, alternately, like something only I.B. Singer could have dreamed up. For instance, he describes what happened when a Montreal man might be recognized in the “Gallery of Missing Husbands” published by the Forward newspaper of New York as a public service.

“When the identification was made, there was a great deal of excitement. The person could be a factory worker, a small businessman, a salesman, or a clerk in a store. Mr. Kaplansky of the Legal Aid Department at the Baron de Hirsch Institute, who was in charge of such matters, was notified at once … (and) took immediate steps to contact the alleged culprit.”

The identification, once proven, would cause a sensation. “The news spread to all the sweatshops in the city. Everyone talked about the man who had been recognized from the Gallery, about how respectable, decent, and honourable he appeared to people who had known him. No one would have suspected him of abandoning a wife and children for another woman.

“The man, of course, was quickly arrested and sent back to the city whence he had come.”

Montreal of Yesterday is an impressive memorial for Medres, who died in 1964, and an easily readable collection of essays for anyone interested in the history of Jewish Montreal. ♦