We visited the historic and elegant Arts & Letters Club, also known as “St. George’s Hall,” on Elm Street west of Yonge Street today. The lovely interior is filled with beautiful works of art by the Group of Seven, many of whom were its members, and by other notable members of the club. Indeed, a sketching and painting session was in full progress in the studio on the third floor when we visited. The building also houses a surprising large social hall that doubles as a concert hall and theatre. Several large scrapbooks on hand were filled with clippings and programmes of events in the Arts & Letters Club from the 1920s forward.

No photographs were permitted of the interior, but we took some photos of the well-kept exterior — which we have compared with an early photograph in our possession from the noted Stephen Speisman Collection of photographs. Interestingly, as shown in the Speisman photo, the Balkan Restaurant next door to the Arts & Letter is gone but there is another restaurant there today. What’s more, the three buildings along Elm Street have all survived the ravages of time and the developer’s  wrecking ball. ♦

Photo montage shows current view of the Arts & Letters Club and its neighbour to the east on Elm Street, as they appear in 2013; and a black and white view of the same buildings possibly taken ca 1970. 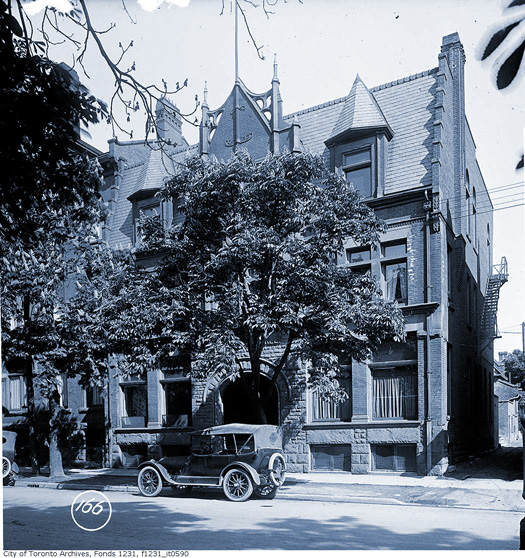