From the Canadian Jewish News, 1983 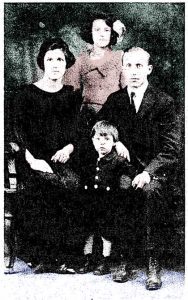 A young Hyman Surchin with his parents Chaya and Moses and aunt Naomi (standing).

As the SS Hamilton Scandinavian docked at Quebec City on Aug. 21, 1921, a tremor of excitement surged through the rain-drenched crowd. On the ship’s deck huddled 108 frightened but excited Ukrainian Jewish children – all of them rescued war orphans from the devastated Polish Ukraine.

Freiman, with her cousin Ella Pierce, had crossed to Europe early in July to personally accompany the children, age 4 to 12, on the 12-day voyage to their new homes and families in Canada.

As the ship came into Quebec harbour, the Yiddish-speaking children, wearing their newly supplied Belgian outfits and waving British flags, clung to their mentors and sang God Save the King in their carefully learned English.

As the orphans drank in every minute of the tumultuous welcome and chaotic disembarkation process, a baby lay, wrapped in blankets, oblivious to the brouhaha around him. For the 8-day-old Chaim Surchin, the historic Aug. 21 landing meant nothing at all. He wanted only to be fed.

Born at sea four days after the ship set sail from Antwerp, Chaim (Hyman) Hamilton Scandinavia Surchin knew nothing of the excitement his own arrival occasioned. His parents, Moses and Chaya, however, found themselves caught up in the contagious festive mood, as they gave thanks both for finally reaching their safe new home away from Russian pogroms and for the safe mid-Atlantic arrial of their first child.

Moses, Chaya and Moses’s nine-year-old youngest sister, Naomi, had left Russia more than 10 months earlier. When they finally reached Antwerp at the end of May 1921, they faced interminable delays in their applications for U.S. immigration. By late July the U.S. had closed its doors to further immigration.

When they learned of the August 9 departure of the Hamilton Scandinavian, destined for Canada, they were determined to be on it, despite Chaya’s by-then advanced state of pregnancy. By adding a few years to each of their own ages and wisely subtracting a few from Naomi’s they were able to convincer skeptical immigration officials that she was, in fact, their daughter. 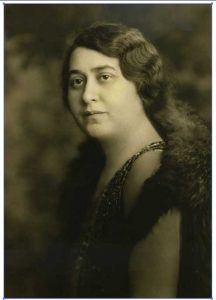 When Lillian Freiman learned of Chaya’s condition, she moved her out of third class and installed her in a first class cabin. Freiman put the two nurses accompanying the orphans at the expectant mother’s service. On August 13 the ship’s doctor delivered his first baby at sea – to the delight and relief of all the passengers and crew.

“It was Tisha B’Av, I remember,” an elderly Chaya related to her daughter Laya some years later.

The ship’s crew held a banquet to honour the new parents. Several passengers, anxious to commemorate the new arrival, collected $72 to help the impoverished parents in their new life.d

Some 30 years later, when Chaya was president of Pioneer Women of America, she was scheduled to speak in Los Angeles and her photo was in the newspapers. A woman recognized her and came to the lecture. She was the one who had taken up the collection on the ship. Both women remained friends for years following that meeting.

Because much of the day was taken up with landing proceedings, the traditional eighth day brit mila for the new Surchin child took place the following day. Lillian and her husband Archibald, who had come from Ottawa to meet the ship, arranged the bris and hosted a kiddush for the closely-knit Quebec City community. The Surchins named the Freimans Hyman’s godparents.

Although the Freimans pressed the Surchins to come to Ottawa, Moses decided to remain in Quebec City and offer Hebrew lessons to the community’s 12 children. He founded the city’s first Talmud Torah.

Several years later, the Surchins moved to Montreal where Moses became a businessman and the second child Laya was born. Hyman remained in Montreal, became a prominent pediatrician, married and had four children.

It is now 62 years since the orphans came to Canada. Over the years Hyman’s path has crossed that of a number of the orphans settled in the Montreal area who had arrived in Canada on the same ship.

Tradition has it that those born on ships are entitled to free passage. The Surchins never had a chance to find out. The SS Hamilton Scandinavian sunk some years after its 1921 voyage to Canada. ♦

♦ Much of the information for this article was provided by Laya Borod, former national secretary of Pioneer Women and younger sister of Dr. Hyman Surchin. Dr. Surchin died in Montreal in 1995.