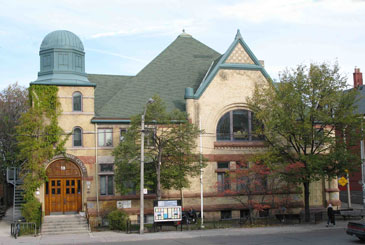 Nathan Friedman-Burley’s bar mitzvah was a walk down memory lane for his family.

The event took place at the Cecil Community Centre at 58 Cecil Street in downtown Toronto, once the home of the vibrant Anshei Ostrovtzer Synagogue where Friedman-Burley’s great-grandfather, Israel Nachman Weinberg, was one of the founders in 1922 and the first president, and where his grandparents, Helen and Jack Friedman, were married in 1943.

The invitation read, “Nathan’s bar mitzvah renews Cecil Street as a sacred and significant space for our family.”

Nathan’s parents, Debra Friedman, a photographer, and Robert Burley, an assistant professor at the School of Image Arts at Ryerson University, said they “wanted to have a historical and personal reference” for the bar mitzvah.

In 1922, Israel Weinberg, who was born in Krasnik, Poland, in 1896 and emigrated to Canada in 1920, and David Sussman negotiated the purchase of the building for the Ostrovtzer congregation, which became the Anshei Ostrovtzer Synagogue. It was sold to the City of Toronto in the early 1960s.

“My grandfather was largely responsible for negotiating the sale of the synagogue,” said Debra Friedman. “One of the stipulations was ensuring that various elements of the Ostrovtzer Synagogue remain[ed] in place — the chandelier, the white marble Hebrew founders’ date stone, the marble yahrzeit plaque and the corner stone.” 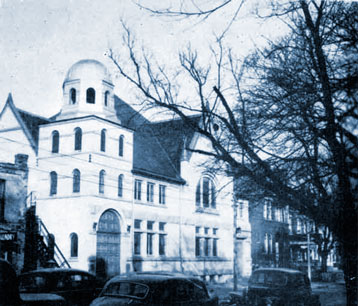 Friedman and Burley said that when they began to look for a venue for Nathan’s bar mitzvah, they recognized the importance of the Cecil Street location for their family.

“It turned out to be a great experience for everyone,” said Friedman. “People in my parents’ generation had wonderful memories. Nathan and his friends loved it as well. They learned the significance of the building and had a glimpse of Toronto’s Jewish history. It was nostalgic and we made history part of our ceremony.”

She said the family was “delighted that the Ostrovtzer Jewish roots are still evident in the building on Cecil Street.

“We will certainly consider the former Anshei Ostrovtzer Synagogue when we plan bar mitzvahs for the other boys.” ♦

This article appeared originally in the Canadian Jewish News and appears here courtesy of the author. © 1993 by Cynthia Gasner. 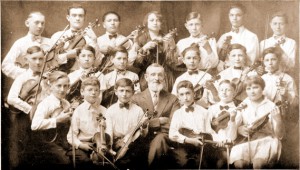