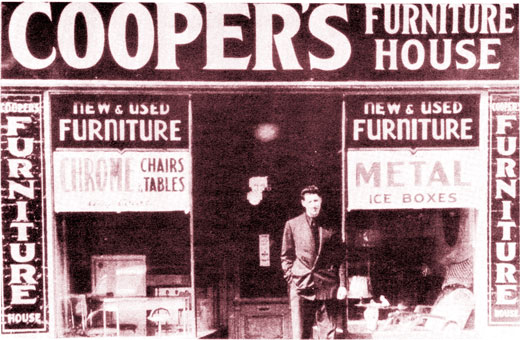 Jack Cooper in front of the store in its early days.

Celebrating its 50th year in business and into the fourth generation of Coopers, the landmark location continues its tradition of excellence, says David Cooper, president of the family business.

His father, Jack Cooper, opened a used furniture store t50 years ago and shortly after, his grandfather, Irving Cooper, a successful furniture entrepreneur in Belleville, Ontario, joined his son. Within a few years, the business evolved into an office furniture business.

Looking through their 1958 catalogue which displays metla desks priced at $26.95, David remarks that many thigns have changed since then.

Staff are like an extended family. When David was five, Bud Garrels joined Cooper’s as the company’s first road salesman. “Today, Bud is our vice-president,” David says.

Kay Daly, who headed up the Hamilton branch, ran the operation for more than 30 years until her retirement. And Brian Walker, who became a manager of the Vancouver operation 20 years ago, now owns the store and operates Cooper’s Office Supply (B.C.) Ltd. as an independent operation.

David, now 45, joined his father and grandfather in the business in 1966. He left several years later when he and his wife Deborah decided to establish a successful bulk food store.

David notes that it was the “first of its kind in Canada — long before Loblaws made it fashionable.” In 1984, David’s father asked him to return to the business.

David’s son Eli, 13, helps out on the switchboard occasionally and 11-year-old Noah is patiently waiting his turn.

‘One door closes and another door opens’ was the favourite saying of Irving Cooper.

“Many doors have closed and many have opened in the past 50 years for Cooper’s Office Furniture and I look forward to whatever challenges lie ahead,” says David. ♦

This article appeared originally in the Canadian Jewish News and appears here courtesy of the author. © 1993 by Cynthia Gasner.