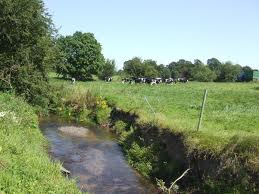 There were bull-frogs in the creek on the other side of Wilson Heights, Jackie told us: monstrous bull-frogs, the biggest he had ever seen. He had brought one home like a warrior returning from battle with a spoil. But he said the granddaddy of them all, the Moby Dick of bull-frogs, was still in the creek, so we mobilized for war. He found a fishing net, Alan a tennis racket, Michael a lidded basket; I borrowed the white chisel (Yiddish for bowl) from the laundry room in the basement. With the sun high in the sky, we strode like vigilantes past the bungalows of Kennard. After two blocks we reached Wilson Heights, the dirt road that marked the end of civilization as we knew it.

Vehicles rarely ventured along this sleepy rural byway, on the other side of which was an apple orchard and a pasture for sheep and goats. The terrain was hilly and a creek meandered through it. Intent on hunting down the huge bullfrog, we tread softly and watchfully along the reedy banks, and before long we spotted him beside a rocky outcropping.

Greenish-muddy-brown and corpulent, he was squatting in the crystalline water, standing stock-still as if aware of the nearness of colossal predators, against which nature had apparently left him ill-prepared; or so we believed. We took positions above and around him; but as Jackie readied the net, the awesome creature instantly lunged and vanished amidst suddenly rising clouds of muddy water generated by his powerful hind legs as a clever camouflage.

As a consolation, we captured several miniature frogs and put them, along with dozens of tadpoles, in the white chisel, leaving it beside the stream to go exploring. There was a hill opposite Overbrook Place and we ascended to the old red barn at its crest. We sang an ode in three-part harmony to Patricia, the farmgirl, and told jokes as a couple of trucks whined and raised dust along Wilson Heights.

As we returned to the creek, a tall boy waved at us from the orchard and disappeared into the trees. A moment later we discovered that the chisel was empty; the farmboy had evidently spilled its contents back into the creek. This deed amazed me and contradicted everything I knew about human nature, especially as concerned boys; but I accepted the loss stoically and trudged back home with my friends without any spoils of battle. ♦

Written as part of a course on Writing Memoirs. © 2011