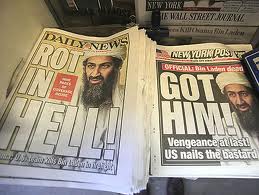 If you have trouble sleeping, don’t read Bin Laden: The Man Who Declared War On America.

The book, an in-depth study of the criminal mastermind who tops the world’s most wanted list, was written by Yossef Bodansky, a former consultant to the U.S. Departments of Defense and State. It first appeared two years ago and was reissued last month by Forum of California.

Although this new edition (late 2001) refers to events of Sept. 11 only on its cover, it is still chillingly prescient of those and subsequent events, and makes them seem entirely inevitable. How, one asks after getting through this book, could we have been so blind?

The son of a multi-millionaire Saudi contractor, Osama Bin Laden is a middle-aged university graduate with computer skills, who abandoned the good life for a fanatical jihad. The last anyone heard, he was living with his four wives and some 15 children in a cave in Afghanistan lacking running water and decent central heat.

As the head of the World Islamic Front for Jihad against Jews and Crusaders, he’s often vowed to mount “pitiless and violent” terrorist attacks against Israeli and U.S. targets. He even spelled out some of his plans in a manuscript, America and the Third World War, that he circulated to key Islamist leaders to enlist their help in inciting the Muslim masses to rise up against the infidels.

As Bodansky shows, Bin Laden’s curriculum vitae is a horrific catalogue of evil acts, including the bombings of U.S. embassies in East Africa, the USS Cole, and the World Trade Center in 1993. Operatives of his terror network also attempted assassinations of the Pope and Egyptian president Hosni Mubarak. The plot against the pontiff was foiled because the terrorists mixed the explosives incorrectly; Mubarak narrowly escaped with his life.

Many other atrocities were attempted and failed, or were aborted in the planning stage. There was, for instance, a grandiose dream of blowing up 11 American aircraft simultaneously as they approached U.S. airports, and a plan to bomb CIA headquarters in Langley, Va.

For all this, the Western powers seemed complacent for too long about the growing menace of the Bin Laden network.

Even after their terrorist credentials were well established, both Bin Laden as his second-in-command, Ayman Zawahiri, traveled to Europe and Britain to “insert high-quality experts” of their macabre calling there and in America. In the early 1990s, Bin Laden even went to Britain on his own passport, relying upon the West’s reputation for poor intelligence.

After he and the mujihadeen rebels repelled the Soviets from Afghanistan, they became convinced of their invincibility, and figured the United States would be a “paper tiger” in comparison, Bodansky explained.

Bin Laden began building his terrorist academies five years ago in Afghanistan, a country that had become the dumping ground for all disaffected and radicalized Islamic youth from around the Arabic world. “Afghanistan is open to anyone who wants to train,” Qaddafi remarked in 1991.

According to Bodansky, Bin Laden and the affiliated terrorist networks turned decisively towards weapons of mass destruction — chemical, biological, radiological, nuclear — in the summer of 1998. They collected pesticides, radioactive materials, and deadly viruses like Ebola and salmonella.

They purchased anthrax from North Korea “for relatively small sums of hard currency.” Also on their shopping list were toxins for poisoning water mains, lethal gases, and fungi for destroying harvests.

Bodansky concludes that bin Laden is “a cog, albeit an important one, in a large system that will outlast his own demise — state-sponsored international terrorism.” His book is a useful tool as we target this pious and misanthropic arch-criminal who seems bent on destroying us.

As this book shows, Bin Laden has made no secret of his hatred of America and Israel, or of his violent intentions. Why didn’t we try harder to stop him before Sept. 11? Now that the genie is out of the bottle, we may have a much harder time containing it. ♦