Beneath the giant dome of the Mormon Tabernacle, the harmonious voices of the famous Mormon Tabernacle Choir rise into the air, melding sweetly. Whether it’s a Biblical hymn or a medley from The Music Man, each selection sung by the 330-member choir reverberates with a rare purity in this hallowed hall.

Established in 1847, the Mormon Tabernacle Choir is one of the oldest performing choirs in the world. Ever since its first appearance outside Utah, at the Chicago World’s Fair of 1893, it has received critical acclaim and recognition as one of the foremost choral organizations anywhere. As usual, most of the pewlike benches in the large Tabernacle are filled for this Thursday evening rehearsal. Many audience members are visitors to Salt Lake who are familiar with the choir through its weekly radio broadcasts, which have aired since 1929 (on the CBS network since 1932). 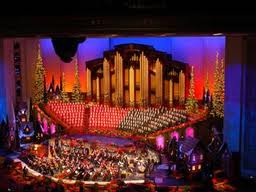 The choir is a staple of the U.S. Bible belt. At present, its weekly half-hour Sunday morning broadcasts are carried live by more than 50 television and 100 radio stations in the United States. Hundreds of other stations play a taped version. As well, these voices are carried via short wave radio to living rooms in Russia, Scandinavia and other countries.

In recent years, the choir has concertized in many countries, including Canada, Japan, Korea, Australia, Brazil, Russia — and Israel. “Our visit to Israel was one of the most fantastic experiences we’ve ever had,” said Don Ripplinger, associate director of the Choir. “We’ve never had audiences that were more knowledgeable and more appreciative than these people were.”

In Israel, the choir performed the Berlioz Requiem with the Jerusalem Symphony, which Ripplinger called “probably the most difficult work the choir has ever done.” Written by French composer Hector Berlioz in 1837, The Requiem is an overwhelming work for large orchestra that includes 110 violins, an augmented brass section, 16 timpani, and more than 200 voices.

An album of material that the choir performed with the Jerusalem Symphony (excluding Berlioz) will be released on compact disc this spring, Ripplinger said. The recording is one of many albums that the choir has released, reflecting a diverse range of musical themes that includes spiritual hymns, folk songs, show tunes and Christmas carols.

A breakaway Christian sect founded in 19th-century America and centred in Utah, the Mormons seem to cherish their links with the Jewish people. According to church spokesman Thomas Daniels, church tradition holds that the Mormons are descended from the Hebrew patriarch Jacob, mostly through Joseph’s son Ephraim. A series of large paintings in one of the visitor centres depicts scenes from the Hebrew Bible, such as Noah’s Preaching Scorned and Abraham On The Plain of Mamre. ♦