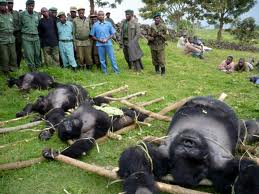 Bushmeat, an hour-long television documentary soon to air on the Discovery Channel, is a riveting, tautly-edited expose of the illicit trade in gorilla and chimpanzee meat in Cameroon and other countries of Central Africa.

Toronto filmmaker Dawna Treibicz defied the odds to make this film about a subject that many in Africa previously considered as taboo for discussion. Although — as the film puts it — the world’s last sizeable wild population of great apes is “being eaten by their closest relatives, right to the verge of extinction,” no one before Treibicz had ever won the approval of an African government to document the problem on film.

Remarkably, Treibicz even managed to get Cameroonian officials to talk about the problem for the first time on camera. She considers that a hopeful sign that something may be done to turn around this ecological disaster before it is too late.

Dubbed “Cameroon caviar”, primate flesh is regarded as an exotic delicacy by enough people in Africa and Europe that there’s a lucrative market for it.

No one knows the full extent of the problem, but in Cameroon alone, some 800 gorillas are reportedly hunted down annually from a total population of about 10,000 that still inhabit the Central Africa’s shrinking rain forest, which itself is facing decimation from the ax and chainsaw.

“At the rate they’re being slaughtered, we predict they may be extinct in about 10 years,” Treibicz said. “Some people say 8 years, some say 20 years. We really don’t know how long they’ve got.”

Using hidden cameras, the documentary shows us how easy it is to visit a bushmeat market and purchase steaks, organs, limbs or other pieces of the endangered animals.
Bushmeat also follows Canadian medical ethicist Dr. Kerry Bowman and other concerned environmentalists as they travel to various tribal settlements in Cameroon, rescuing chimpanzees and trying to rehabilitate them back to the wild.

The documentary has a fascinating sequence detailing the remarkable ability of gorillas and chimps to learn sign language to communicate with humans. By such means, it easily persuades us — just as local ecological workers persuade tribal schoolchildren — that these hairy primates are too much like ourselves to put onto our dinner plates. They’re anything but fair game.

Treibicz, who graduated from Toronto’s York University in theatre studies, has been producing and directing television films for 20 years, usually in the subject area of current affairs, arts, and what she calls “investigative advocacy pieces.” Bushmeat was her first nature documentary, she said, and one of the most difficult films she has yet made.

She did not travel to Africa in advance of the film. “If I had gone to do a survey trip before the shoot, I would not have gone back. I couldn’t have imagined how difficult it was, trying to tell a story about an illegal trade in a country that was reputed to be the most highly corrupt on the entire continent.”

Over the four years it took to make the film, the logistical challenges of bringing a large film crew and entourage into sub-Saharan Africa sometimes seemed so overwhelming that at one point she considered giving up. Her mother, a Holocaust survivor, steeled her resolve by telling her, “If you don’t go, you could be missing the biggest adventure in your life.”

Treibicz has many ideas up her sleeves for new documentaries, including one about the Serpapinto, a ship on which a boatload of European refugees made an arduous journey from Lisbon to America during WWII; some eventually settled in Montreal. But even veteran filmmakers like Treibicz often find it hard to get funding from broadcasters for new projects.

“It’s sometimes difficult to find the right match for the story that you want to tell,” she said.

Dr. Jane Goodall, the renowned anthropologist, honoured Treibicz by introducing Bushmeat at a private screening in Toronto in October. Television viewers will have the opportunity to see this worthy documentary when it airs on the Discovery Channel on Sunday Nov. 4 at 8 p.m. Eastern time (9 p.m. Pacific). ♦