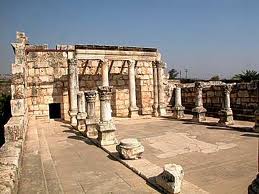 In the ancient fishing village of Capernaum, above the northwestern shore of the Sea of Galilee, visitors may examine a partially reconstructed 2nd- or 3rd-century synagogue and glimpse portions of the underlying remains of an earlier synagogue in which Jesus is said to have preached.

The town’s name derives from the Hebrew name K’far Nachum, or Village of Nachum, but very little is known of its namesake, Nachum. Not so, however, for its most famous resident.
Upon leaving Nazareth, Jesus began his ministry in Capernaum, possibly because it was the hometown of two of his earliest apostles, Peter and Andrew. Five of the apostles would be fishermen from Capernaum.

In no other place, it is said, did Jesus deliver so many discourses and perform so many miracles. Scripture records that here, among other miraculous deeds, Jesus cured lepers, cast out demons and healed many believers, including a paralyzed man and Peter’s mother-in-law. Nearby, on the shores of the beautiful and peaceful harp-shaped lake whose Hebrew name is Kinneret (harp), Jesus fed the multitudes with the miracle of the loaves and fishes.

Discovered in 1866 and excavated from 1905 to 1922, the synagogue is one of the best preserved examples of its type from that early period of synagogue construction. A rectangular building of dressed blocks of white limestone, it faces south towards Jerusalem and featured rows of columns, a stone bench around the perimeter, a women’s gallery on an upper level, a colonnaded hall, and a richly decorated frieze and cornices.

Parts of the frieze are on view along a walkway outside the synagogue. The decorative motifs include a menorah, the five-pointed star known as Solomon’s Seal, and the earliest known example of the six-pointed Star of David. Decorations also include pomegranates, bunches of grapes, olive branches and a variety of real and mythic animals.

Here one may also see the oldest graphic representation of the Holy Ark of the Covenant, the wagon in which the ancient Israelites kept the Ten Commandments and Torah, in order to transport them into and out of battle. An olive press, basalt flour mill and other non-religious implements from 2,000 years ago are also on display. 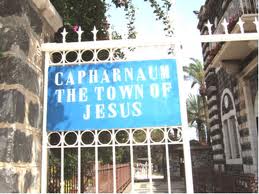 Although Jesus reproved the Jews of Capernaum for their lack of belief, a Judeo-Christian community remained there for centuries. However, the original synagogue that Jesus knew was destroyed by the Romans and rebuilt, then leveled by an earthquake in the 6th century.

Near the old synagogue, the ruins of a church mark what is believed to be the former house of Peter. A mosaic floor was found in a room in which Jesus was supposed to have slept.
The site was purchased by the Franciscans who built an octagonal church on stilts above the remains of the church. Boasting a modern design, the church architecture has not been universally praised. One guidebook refers to it as “an ugly chapel that resembles a flying saucer hovering above the ruins.”

Also nearby is Tabgha, the place where Jesus performed the multiplication of the loaves and fishes, preached the Sermon on the Mount, and appeared after the resurrection to confer the church leadership on Peter. A Byzantine ruin was uncovered here in 1932 and reconstructed as the Church of the Heptagon in the early 1980s.

Visitors to the Galilee are often overwhelmed by the abundance of Christian lore in the region associated with particular sites such as the famous Mount of Beatitudes. The less-famous lakeside village of Migdal whose name means “tower” in Hebrew, apparently gave rise to the surname Magdalene: Mary Magdelene was born here, on a site now marked by a small domed shrine.

At Kana, the story is still told of how Jesus performed his first miracle at a dinner party. At Kursi, where the miracle of the swine took place, one sees the ruins of a Byzantine church. A powerful spotlight illuminates a cave in a nearby mountainside, where Jesus healed a man possessed by demons.

A spirit of peace overtakes visitors approaching the shores of the Sea of Galilee, where groups often hold pre-arranged prayer gatherings. “It is a place for meditation,” author Eugene Hoade wrote. “The memory of this site and its story will live with you down the years.” ♦