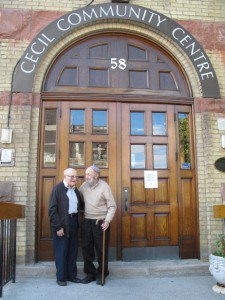 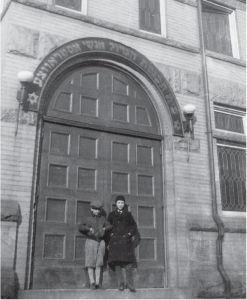 Back in 1938, two Jewish boys posed for a photo on the steps of Toronto’s Ostrovtzer Synagogue on the north side of Cecil Street, just east of Spadina.

Last week [July 2014], roughly 76 years after that first photo was snapped, Gurion Hyman and Gordon Perlmutter returned to the same spot and had their picture snapped again.

The occasion was a plaque ceremony hosted by Heritage Toronto, commemorating the street’s rich Jewish history. The ceremony took place inside the former synagogue, which is now the Cecil Street Community Centre.

The building itself is the most visible relic of the street’s Jewish past. A chandelier that once belonged to the synagogue still hangs in the main hall and a marble plaque engraved in Hebrew with the names of donors still adorns the lobby. Hebrew is also visible in the cornerstones that grace the exterior.

The Jewish Old Folks Home, the Farband, the Folks Farein and other important Jewish institutions once lined the street, which also boasted the residences of the family of politician J. B. Salsberg and members of the Langner rabbinical dynasty.

After the plaque was unveiled, many attendees joined free walking tours of the Spadina neighbourhood hosted by the Ontario Jewish Archives.

More than a dozen important sites of Jewish interest around the city have been plaqued so far under Heritage Toronto’s Jewish Historical Plaque Initiative. They include Christie Pits, Scheuerer House, the YM-YWHA, the original Mount Sinai Hospital on Yorkville Ave., the Balfour Building, the Labor Lyceum, the Primrose Club, Tip Top Tailors, the Kiever Synagogue, the Federation of Jewish Philanthropies of Toronto, and the Jewish Old Folks Home (later Baycrest).♦

Photo caption: Gordon Perlmutter and Gurion Hyman stand outside the Ostrovtzer Synagogue in 1938, and again on the same doorstep some 76 years later in 2014. Photos courtesy Ontario Jewish Archives and Bill Gladstone. Below, Ostrovtzer’s plaque of Hebrew names, courtesy Torontoist. 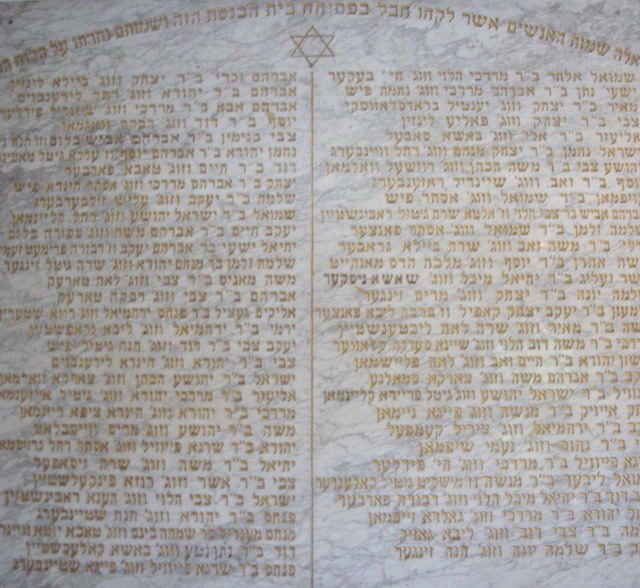