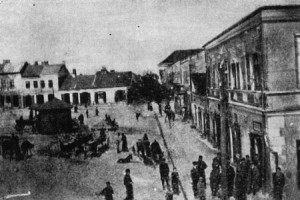 The memory of a murdered Jewish community has been kept alive for years by members of the Chmielniker Society of Toronto.

Chmielnik, located in the southeast of Poland, was once home to more than 8,000 Jews before World War II. This was in a town of 10,000.

The Chmielniker Society is made up of those who came before the war, Holocaust survivors, their children and grandchildren.

“Heritage and roots give meaning to the past, appreciation of the present, and hope and strength for the future,” says Israeli-born Joseph Mapa, the executive vice-president and chief operating officer of Mount Sinai Hospital and the vice-president of the Chmielniker Society of Toronto.

Mapa’s father, Kalmen Mapa, a Holocaust survivor who went to Israel in 1948 and moved to Toronto in 1959, is an executive member of the Chmielniker.

“A very important part of our heritage is the growing involvement of more and more members of my generation to whom our parents have said ‘Come join us and let us continue our Chmielniker heritage and our wonderful tradition together,’ “ said Joseph Mapa.

The Jewish community in Chmielnik dates back to the 16th century. Despite a massacre in 1655, the community thrived. The town was known for its grain, livestock, timber and textile trades. It spawned great rabbis, yeshivot and a vibrant group of Chassidim who were among the first chassidic settlers in Safed in Israel.

Following the 1939 invasion of Poland, several hundred Jews, mostly young men and women, fled to Soviet-held territories to join the Soviet and Polish armies. Some of them rose to officer ranks and won the highest battle decorations.

On Oct. 1, 1942, about 1,000 young men and women were deported to the forced labor camps in Skarzysko-Kamienna, Czestochowa and to camps in Germany. Only a handful survived. A month later, the final deportation to Treblinka took place. Some fled into the forests where only a few score of them survived.

After the war, a handful of Jewish survivors tried to resettle in Chmielnik but gave up the idea because of hostility from their Polish neighbors.

When this assignment came, I too felt a reverence for what was once my family’s home. This writer’s parents, Anne and William Kleinert, and maternal grandmother, Marmel Ashley (Eybeschuetz) came from Chmielnik. I well remember my bubbie telling me stories of her childhood in Chmielnik, and meetings of the Chmielniker Society. I regret I did not take more time to record her stories.

Now the children and grandchildren of the landsmanshaft are joining the Society and revitalizing the group. The new executive committee has this intergenerational component. The newly elected executive includes members of the next generation like Rose Baum, Elliot Erlichman, Harvey Goldlist, Margie Levitt, Hindy Shemesh, Hal SteinfeIt and Zvi Wolfowicz. Fay Goldlist is the president of the Women’s Auxiliary.

The younger members have already organized a moving Hazkarah service and are planning other meaningful activities. “We are involved in all aspects of the Society’s affairs — financial, programmatic, as well as the care and maintenance of the cemetery,” says Mapa.

Reflecting on the tragedy of the Holocaust, newly elected president AI Goldlist says, “We have to be thankful that we have survived and that we have families who will continue with our tradition and also will not forget their bubbies and zaydes and the rest of their relatives.”

Levitt says that just hearing the name Chmielnik brings out strong feelings in her. “Knowing the people who have become my extended family — hearing the stories about life in Chmielnik before the war — somehow helps to make everything come to life for me.”

“Chmielnik is no longer just a mythical town in Poland but it is part of my history. My commitment to the Society has given me an opportunity to help to preserve the past as well as to bring the past to life for my children. It is essential to pass on our history to the next generation.” ♦

This article first appeared in the Canadian Jewish News and appears here courtesy of the author. © 1993 by Cynthia Gasner.