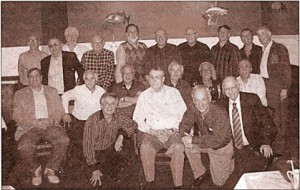 “Looking back, my teenage years were a wonderful time of life with less stress and a place to go every week to have fun.”

Several months ago, Heller, 66, began planning a 50th anniversary reunion with the former members of Club Desmond, a club for teenage boys that met at the Bloor YM-YWHA some 50 years ago.

He and his longtime friend Ron Morris began to search.

“We couldn’t locate several of them, but 19 former members and our adviser, Bill Laber, met recently for dinner to celebrate at our 50th reunion. One member, Michael Adler, even flew in from Florida.”

Heller, who is in the printing business, describes the event as “phenomenal.” He says that as the former members arrived, many of them who had not seen each other over the years “hugged and kissed each other and the mood was very happy. It was a time for schmoozing, reminiscing, viewing acollage of photos and passing around pictures which the former members brought with them.”

In the 1950s, the Club Desmond met Thursday and Sunday evenings at the Y at Bloor Street and Spadina Avenue, now the Miles Nadal Jewish Community Centre.

Heller recalls that the dues were 25 cents a week. Their program included floor hockey, basketball, swimming, social dances and fund-raising for the United Appeal.

“We were so proud to raise $125 at a dance,” says Heller. “At the reunion, former members laughed, and one said that today, we go out for lunch for that amount.”

The club was formed in 1954, when several friends were sitting around at the Palmerston Avenue home of brothers Abie and Sheldon Lovat and decided to form a new group.

“Sheldon and a couple of guys approached a bunch of guys who went to King Edward Public School and other schools in the area, and hence the new Club Desmond was born.”

Heller has a signed contract with the Seaway Hotel dated in the mid-1950s for a dinner for 40 members and guests of Club Desmond, The price for a five-course meal was $3.75, which included recorded dance music and a coke and ginger ale bar.

In the 1960s, things began to change as some members moved north and others left after they became engaged and married. The club disbanded.

Following their 50th anniversary reunion, Heller received numerous e-mails from those who attended, expressing their appreciation, happiness and thanks for the “wonderful event.”

“It rekindled my youth for a brief moment, bringing back some of my fondest memories,” Stan Wagman wrote, a sentiment echoed by all who attended.

Heller says they are now planning another reunion in Las Vegas in two years.

This article first appeared in the Canadian Jewish News and appears courtesy of the author. © 2008 by Cynthia Gasner 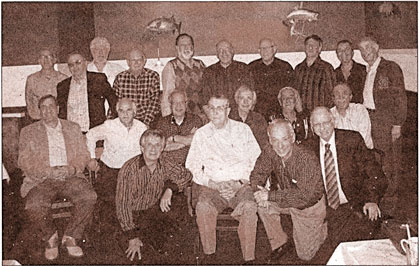