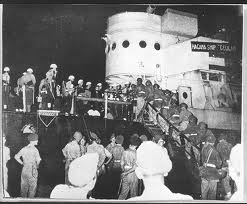 Paducah being boarded by British marines

A recent ceremony at the U.S. Holocaust Museum paid tribute to the captain and crew of the Paducah, an aging American gunship that was sold as surplus after WWII and retrofitted to smuggle Holocaust survivors through the British blockade to Palestine in 1947.

The captain of the Paducah was Rudolph Patzert, a 35-year-old New York City gentile who agreed to sail the ship from Brooklyn to Bulgaria, with no clue at first as to its impending mission. But by the time members of the Haganah underground approached him enroute and asked him to continue to Palestine with a cargo of some 1,500 Jewish refugees, to be picked up in Bulgaria, they had rightly sized him up as someone who would not walk away from such a humanitarian endeavour.

Patzert, who was given special honours at the Holocaust Museum ceremony, now lives in retirement with his wife in Encinatas, California. His gripping account of the sailing of the Paducah has just been published in a book that this reviewer found hard to put down. Running the Palestine Blockade: The Last Voyage of the Paducah (Naval Institute Press, $25 US) is a fine seafaring tale in the best maritime tradition. It is also a taut drama, filled with suspense and adventure and a crowning sense of morality.

British agents and spy ships trailed the ship through the Mediterranean, attempting to impede its progress at every turn. “Now, in Bayonne,” he wrote after encountering another roadblock imposed by the British, “another door had been slammed shut against us. It seemed to me that I was discovering what it meant to be a Jew. Now I, too, was a Jew, and the Paducah herself bore a curse, and we were driven from one closed door to confront another closed door. Well, if that was the way it was, by God, we would pound and pound on the closed doors until we crashed them open.”

When the Paducah’s sister ship, the Northland, takes on a group of small Jewish orphans, Patzert is gripped by an overwhelming pathos as he watches these sorry youngsters, wrapped in layers of rags, shuffle up the gangway. “The men of the Northland picked up the smallest of them and carried them into the ship tenderly, as though these were their own small sons and daughters, their own flesh. I’m not a sentimental man — at least, I like to think that I’m not — and I couldn’t remember when I had last wept, but there were tears in my eyes now. I was not ashamed of them when Eddie Kaplansky found me in the darkness and stood beside me. ‘These are the orphans,’ he said simply. ‘There are so many of them, so very many.’”

Later, Patzert is moved again when he stands on the deck of the Paducah as it fills with “a mass of humanity bearing a burden too heavy to carry and looking for nothing at all in the world but a home” — and then hears the people sing “Hatikvah” as the ship pulls away from the land.

Twenty-five miles off the coast of Palestine, the weary passengers sighted land for the first time — the top of Mount Carmel, near Haifa — but were forbidden, like Moses, from reaching the Promised Land. Ten miles from shore, the Paducah was rammed by a British destroyer and its occupants captured and shipped to a refugee camp on Cyprus. To avoid a British noose for his role as captain of an illegal refugee ship, Patzert completed his ceremonial induction into the Jewish people, taking the identity of a Romanian Jew, Mendel Levey, and becoming a Jewish prisoner on Cyprus.

Torontonian Morry Lewis was a helmsman on the Northland, which was renamed the Jewish State enroute to Palestine, and attended the recent commemoration for the Paducah in Washington D.C. “We were two ships that ran together,” he recalls. “We were both outfitted for refugees in Bayonne, France, from the insides out.”

“The United Nations voted for a Jewish state because of the pressure we brought to bear — all those ships crammed with people trying to get in to Palestine. . . . These ships played a big role in the vote for getting a Jewish state.”

Reuben “Red” Shiff, a Torontonian, was a crew member of the Paducah. Before the war, he lived with his family on Kensington Avenue, and joined the Canadian Army at the age of 15. After serving on the Paducah, he reached Palestine, joined the incipient Israeli Army, and was killed in the 1948 War of Independence. ♦