The 50th wedding anniversary of Belle and Harry Greenwald of Linus Road, Willowdale, was celebrated at a luncheon in their honour hosted by their daughter and son-in-law, Carolyn and Joe Feldman, at the Adath Shalom Synagogue.

Harry Greenwald was born in Stacha, Poland in 1911. His parents brought his to Toronto six months later. He worked for Canadian National Telegraph for 28 years and sold automotive parts for many years. He retired in November 1983. He held various positions on Adath Shalom’s board of governors and also was active in the Minsker Farband.

Some genealogical documents related to the Seidens of Toronto (1909) and Ripley (afterwards). The birth record (left) is for Pauline, who was likely Belle’s sister; it provided the details of their parents’ marriage (right)  in Toronto in 1909. Click on the documents to enlarge them. 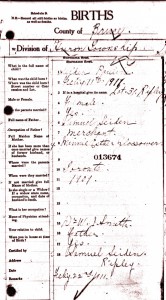