Children of the Factory were surprisingly happy

When I awoke the second morning it was with an awful thought of the day before me. The weariness of the night before had developed into stiffness of the muscles and the mental fatigue into a stupid lethargy.

But I could not linger to contemplate on the hardness of my lot. I had to “ring in” at the box room by 7:30, which meant that I must be in the factory by 7:15 in order to dress and find my way through the maze of halls and packing rooms and up the four flights of stairs, by starting time.

There were numerous elevators throughout the building, but there were also as many printed orders to the effect that no employee must use the elevators except when conveying goods.

Going to work that first morning, I had wondered at the listlessness of the red-eyed crowd jammed in the car, but the second morning I fully understood. I was one of these toilers, my own head and back ached dully and my brain could reach no further than the work before me, which I would have been only too eager to forget. 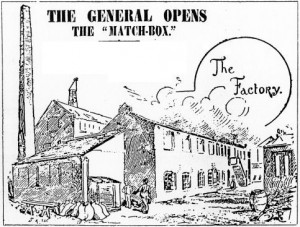 I found myself grabbing vacant seats ahead of even the aged and decrepit. Assuredly grinding toil is not conducive to the finer sentiments. I had consoled myself with the idea that the first day would be the hardest, but in this I was deluded. I was fresh and eager the first morning at least, whereas I was beginning the second day too weary to think or speak. It was but a tedious repetition of the day before, except that it was without the novelty and interest — a weary grind that lasted for half an eternity.

Besides the awful mental agonies I was suffering acute physical pain which after a time settled down gradually into chronic aches, dull and stupefying. My ankles and wrists swelled and hurt keenly at every movement, and when one considers that my work required two hundred and forty up and down movements of the foot in one minute, one might have some conception of what superhuman endurance this would necessitate.

The muscles of my neck also became swollen and stiff, and the nails on my left hand became worn down and extremely sensitive.

But the seat of all my sufferings was my little wooden packing box. A chair would have been much more comfortable.

I thought I had done admirably that first day to make 800 boxes and when I put forth a superhuman effort I actually made 1,800 the second day. I was rewarded by a short, concise talk from the general manager in which he informed me that I was “expected to make 4,500 daily,” and factory etiquette demands that if one does not fulfill the expectations of the manufacturers one is “fired.”

Need I mention that I was worried over money matters? I am sure it would prove interesting as well as instructive to any employer to realize just what a girl can do with 45 cents per week, for this was the exact sum left me after paying board, car fare, and use of laundry, and for the numerous other small necessities.

With the passing weeks an awful pall of melancholy settled down upon my youthful soul. I could see the future as one long vista between stakes of flat cartons, and the past, acres of heaped-up pasteboard boxes.

The children, with their irrepressible spirits, whiled away the time by singing lustily all the popular songs of the day and a few others. One especial favourite, which should be put in the latter class, and with which we were favoured at all times and seasons, was a ballad of a decidedly moral cast, and a tune, monotony incarnate, the chorus of which ran thus:

This they rendered with all due pathos and deep feeling. 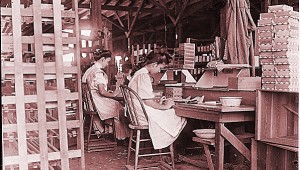 They were very interesting little creatures, those poor little factory hands. There is something wonderful about the sweetness of little girls, even of the little girls born into wage slavery, who have toiled since they were scarcely more than babies, and will have to toil until the last long rest. What a legacy! What a prospect for the future! And yet they are still surprisingly sweet and happy-hearted.

One or two of the little girls were very pretty and remarkably graceful as they went about their toilsome work, dragging heavy packing boxes to and fro, and carrying 50 pound bundles of cartons.

Then there were others; one of them was a tiny stunted creature whose sole topics of conversation were the youthfulness of her appearance and her teeth, past and future, which formerly had been extracted many moons ago preparatory to the coveted “set.”

Another was an uncouth child of the slums who used to entertain me with long monologues on how her baby mother could swear, with graphic demonstrations thereof.

Bobbie, who was cart pusher or something of that order, for the box-room, was a rag-a-muffin whose evil spirit seemed to inflame even the roots of his red hair. Yet Bobbie had the voice of a seraph and was a born cavalier. He had all those traits that the fair sex so admire; he was a bold, free thinker, and was not afraid to stand up nobly for his rights — behind the manager’s back.

And when it came to saying those innumerable pretty things so dear to the feminine heart, Bobbie was irresistible. He has spent many an eight-cent hour sitting on my table telling me his varied love affairs. One he confided to me that he was making $4 a week now, so guessed he would soon marry Doris. Doris was a fair little girl with face and hands as dainty as if she had sprung from an aristocracy instead of the east end slums. And very probably there is before her some such brilliant future as Bobbie suggested.

I often wonder if these children were any happier than I in never having known any better lot, or was I more fortunate in having sweet memories of the sunny, care-free past.

I became so dazed with the physical pain and mental inertia that I almost ceased to think at all, so the days crawled wearily away until at length I found myself actually unable to walk straight.

Finally one afternoon I was surprised to find strange various coloured phantoms dancing on the table before me. I stared dazedly at them for a time; then I remember reaching out my hands towards them, and something striking me heavily on the side of the head.

When I opened my eyes, I was lying in an aisle between apparently interminable rows of carton bundles; things had a strange unearthly aspect, and as a train of vague, visionary thoughts passed through my mind, I fancied that years must have elapsed, and that this was indeed the future, and I had grown to think about it.

As I lay there groping about in my befogged brain, it began to dawn gradually upon me that I had merely fainted and was lying in the stock room, where they had carried me. They had loosened my clothing, my hair was wet with the water they had thrown upon me, and the girls were crowding around with their pathetic expressions of sympathy.

I came slowly back to my normal state, however, and as I ceased to an object of interest, the girls were ordered back to their work. The manager, passing through, came and offered his sympathy and suggested that I go downstairs, which I did as soon as able to regain my feet.

The following morning, however, instead of springing up with my usual alacrity, at the warning of my little alarm clock, I lay listening listlessly to it ticking off the precious minutes. Even the booming of the City Hall clock and the shrill factory whistles, which hitherto had filled me with such alarm let I be late, failed to rouse me from my lethargy, which was the nearest approach to happiness of anything I had experienced for some time.

This was but a premonition of the fact that grim disease, which had been following me for a long time, and the approach of which had doubtless been somewhat responsible for the blue spectacles through which I had seen most of the factory life, had at last laid its clutches upon me.

I need not go into the details of the long illness and the slow return to health. I am now more happily situated, but I never think of my days at the box-folding machine without deep feeling for the girls who are doing the work that was too exacting for my physical and nervous strength, girls who are serving what to me is the awful sentence of the unlearned. ♦