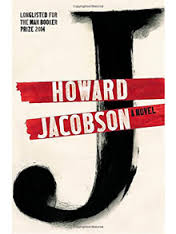 Max Glickman, the fictional Jewish cartoonist who is the narrator of Howard Jacobson’s 2006 novel Kalooki Nights, freely admits that he views the Jewish people as “an immoderate, overemphatic people, much given to exaggeration” and adds: “So what? I call it giving value for money myself. You prick us so we bleed profusely.”

In his most recent novel, titled simply J, Jacobson demonstrates his own bent for exaggeration for the sake of heightened narrative punch and punchlines. As a result, readers may find themselves “slogging through a landscape of papier-mache incredibility,” as literary critic James Wood once observed about another of Jacobson’s novels, The Finkler Question (2010).

At the heart of J is a terrible historical secret, a vast unspeakable atrocity that a post-apocalyptic Britain has done its best to erase from the history books and from human memory. The thing, also sometimes scatalogically referred to as the Great Pissaster, was apparently so bad that it has become known as “What Happened, If It Happened.”

Because the letter “J” was somehow associated with this evil thing, the protagonist Kevern Coco Cohen, like his father before him, cannot pronounce that letter of the alphabet without compulsively drawing his fingers to his lips as though to suppress the sound. The impulse is also represented typographically: throughout the novel, the letter J appears as a sort of self-effacing figure, with two tiny cross-hatches running through it.

In a totalitarian society reminiscent of George Orwell’s 1984, Kevern Coco Cohen, an isolated, obsessive-compulsive woodcarver, falls in love with a quirky misfit named Ailinn Solomons in the nondescript seaside town of Port Reuben. Ailinn, bothered by a reference Kevern makes to her thick ankles, retorts that he has a thick brain to match: their romance is of the low variety, which happens to match her bleak opinion of love. 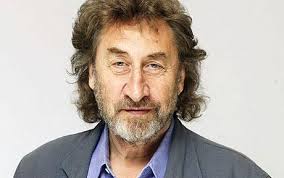 Jacobson omnisciently puts us inside the minds of Ailinn and his other darkly comic characters. Ailinn thinks: “What good came of love, when all was said and done? You fell in love and immediately thought about dying. Either because the person you had fallen for had a mind to kill you, or because he exceptionally didn’t and then you dreaded being parted from him.”

In something called the Great Renaming, the people of this dystopia by the sea were assigned new names — Celtic-sounding first names and family names of a distinctly Jewish timbre (perhaps so that everyone will be discriminated against with equal irreverence). A parade of cartoonish characters with fanciful half-Jewish names march across the page with Dickensian abandon: Esme Nussbaum, Ythel Weinstock, Densdell Kroplik, Edward Everett Phineas Zermansky. When Kevern Cohen is swept into a bizarre murder mystery, the victim is Lowenna Morgenstern and the sleuth is Detective Inspector Gutkind.

The world of J is metaphorically shrouded in mist and fog, as if truth and wisdom have disappeared from a civilization overwhelmed by guilt and horror. It is a brusque, dumbed-down world filled with babble and confusion, in which nobody knows anything worth knowing and people compulsively apologize to each other. Like Winston Smith in 1984, Kevern and Ailinn quest to uncover the suppressed truth about the past but, again like Winston — spoiler alert — they are defeated.

Born in Manchester in 1942, Jacobson has been called England’s answer to America’s Philip Roth, and may even be a rough British equivalent to our own Mordecai Richler. He seems to be maintaining a tradition established by the late Victorian British writer Israel Zangwill of penning low satirical portraits of British Jews (see Zangwill’s 1899 novel Children Of The Ghetto.) Some of the Jewish characters in Jacobson’s 2010 novel The Finkler Question, which won the Man Booker Prize, seem as self-effacing as the letter J in the current book under discussion.

When Jacobson writes of “What Happened, If It Happened,” he gives us enough glimpses of the thing that we know it is an event parallel to the Holocaust. And what might “J” be but the first letter of the word Jews, another of the author’s obsessions? (Ironically, the author’s name begins with the same letter.)

This near-future post-apocalyptical tale marks a distinct departure for Jacobson, in which the dark comedy is overpowered by paranoia and prognostications of doom. If this hybrid murder mystery and dystopic fantasy is an experiment, it fails. The characters seem cardboard and there is a dearth of concrete description to anchor the reader in the dull pea-soup of fog and churning oceans of trivial detail.

Contrast this, say, with Cormac McCarthy’s compellingly readable post-apocalyptic fantasy The Road (2006). McCarthy, a master craftsman, knows at all times where his characters are going and what is going to happen to them; their quest for survival is basic and well defined. The arc of the story is small, especially as compared to the vastness of what we don’t know (and never find out) about the calamity that has almost destroyed human civilization. Although they are swathed in gray smog, the nameless father and son in The Road are realized with such clean lines and clarity of human emotion that they seem to transcend into myth.

Nothing of the sort happens in J. One wishes that Jacobson would draw more from human nature and real life, and less from the vast reserves of punchy stories and situations that have accumulated in the “old curiosity shop” of his cluttered brain. ♦