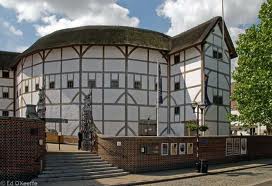 The play is again the thing in the Southwark district of London as a newly-built replica of the Globe Theatre, where some of Shakespeare’s most famous plays debuted almost 400 years ago, is set to open in late August (1997) for a three-week dramatic season.

Julius Caesar, As You Like It, Hamlet, Othello, King Lear, Macbeth and Romeo and Juliet are among the plays that were first performed here, but the new Globe’s management has yet to announce which productions will be featured when the historic venue finally opens after several prolonged delays.

Whichever plays are chosen, they will supposedly be mounted just as they were in Shakespeare’s day. The theatre will be lit by natural means, all sound effects and music will be live, and set design will be no more sophisticated than it was in the days when England’s supreme Bard supervised the production of his own plays here.

“Sweet” William Shakespeare of London, who made piles of money as an actor and earned only a pittance as a playwright, was a principal in the actor’s syndicate that owned the circular, thatched-roof theatre when it opened in 1599 on the south bank of the Thames.

The original structure burned down in 1613 after the thatched roof was ignited by a spark from a cannon fired during a performance of Henry V. It was quickly rebuilt and long before it was demolished in 1642 had attained a reputation as the most renowned theatre in Elizabethan and Jacobean London.

For centuries afterwards, just as literary historians groped for clues about the qualities of Shakespeare the man, so too did they wonder about the dimensions and precise location of the legendary theatre. Not until October 1989, when the Globe’s foundations were discovered beside another unearthed theatre called The Rose, were they able to attain conclusive evidence of its true form. 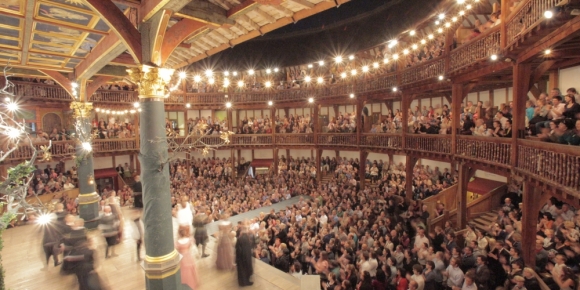 A polygonal wooden structure with three covered galleries, a covered proscenium stage and an open centre, the Globe was constructed of huge oak beams, clay bricks, thatch and lime plaster. For the reconstruction, a team of master craftsmen utilized these materials and closely followed Tudor-era construction methods. The theatre was rebuilt immediately adjacent to the original site, which is partly occupied by a historical building.

To satisfy curious onlookers, a Shakespeare Museum, featuring an exhibit on the Globe, opened several years ago. Visitors may also take a short guided tour of the theatre as it nears completion. The cost is about $9 for adults, $7 for students and seniors, $5.50 for children.

A stroll through the Southwark district takes in numerous other sites of significance to Shakespeare and other literary figures, as well as a colourful assortment of historic pubs, inns, churches and jails.
Between Blackfriar’s and London bridges, one passes the former bullpits and brothels of the rough-and-tumble Elizabethans, the purported residence of architect Sir Christopher Wren as he supervised construction of St. Paul’s Cathedral across the river, and the chimneys and church spires described in the novels of Charles Dickens, who spent his boyhood here.

Nearby, in a vacant lot usually hidden behind a blue wooden fence and gate, lies part of the foundation of the original Globe. The site is marked by a bronze plaque showing a map of the district as it was known in Shakespeare’s day. A few steps further on is the 17th-century Anchor pub, where visitors may inspect a four-foot model of the Globe as they quaff pints of brew.

One also finds the original site of the Rose, a theatrical rival to the Globe. Soon after its discovery, it was measured by excited archaeologists, then reburied beneath a new building. The Rose’s original foundation supposedly lies intact beneath the new construction.

The local Southwark Cathedral pays homage to its most famous parishioner through an alabaster reclining figure and colourful memorial windows which depict Hamlet, Falstaff and other characters. A plaque in the cathedral commemorates Edmund, the playwright’s younger brother.

Church records show that William paid the considerable sum of one pound to have the great bell sound during his brother’s funeral. The cathedral also contains a memorial to John Gower, the first to use English for literary purposes.

The district also boasts the George Inn, London’s only surviving galleried coaching inn, which dates from about 1676. With their spacious courtyards and balconies, such inns have been acknowledged as the crude forebears of theatres such as the Globe. The travellers in Geoffrey Chaucher’s Canterbury Tales began their journey from one such Southwark inn.

Pedestrians also pass the ruins of the medieval Winchester Cathedral and the Clink Prison, the jailhouse that gave rise to the common expression “in the clink.”

The Globe Theatre is situated near the Mansion House Underground Station, along the New Globe Walk, Bankside. ♦