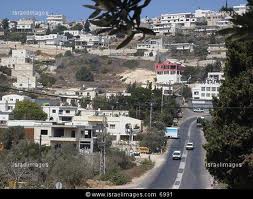 The town of Isfiya, in the Carmel Mountains of Israel, is so close to Haifa as to be considered almost a suburb. Yet it is markedly different.

Built on the site of an ancient Jewish village, Isfiya is a Druze village, and 80 per cent of its 9,000 inhabitants are followers of the secretive, mystical religion that was founded exactly 1,000 years ago in the year 996. Male Druze elders are instantly recognizable on the streets of Isfiya, thanks to their thick mustaches, dark robes and Fez-style hats.

One of 22 Druze villages in Israel, Isfiya has opened some of its homes to outsiders. By pre-arrangement, groups of visitors may come into the dining-room of a Druze family home, eat a traditional Druze meal, and afterwards learn something about Druze traditions and beliefs.

The Druze have no territorial aspirations of their own, and the 90,000 or so living in Israel fully accept and support the existence of the Jewish state. Since 1956, their youth have been obliged, like all Israelis, to serve in the army. The Druze and the Jews have provided an exemplary model of co-existence.

The main prophet of the Druze is Jethro, father-in-law of the biblical Moses, whom they call Nabi-Shoab. Their holy books, called Wisdom Books, are not available in any library or bookstore; they are secret texts that may be seen and studied only by religious members of the tribe. And it is a tribe. Since the year 1043 of the Common Era, no newcomers have been admitted into the religion. The only way to become a Druze is through birth. (There are presently about 1.5 million Druze in the world, principally in the Middle East, with about 200,000 scattered throughout Latin America.)

The Druze do not drink, smoke, use drugs or eat pork, and those who marry outside the tribe are excommunicated. The Druze place of worship is called the khailwa and resembles an ordinary house; it is never marked by any sign or emblem to distinguish it to outsiders. The Druze have kept a low profile and remained secretive over the centuries as a result of the persecution they suffered in the Middle Ages from Moslim governors who did not recognize their religion. For similar reasons, Druze villages are always located on remote mountaintops, not on open plains or by the sea, where there would be less protection.

A Druze lunch resembles a typical Middle Eastern meal in the prodigious assortment and variety of dishes served. Participants sit around a small table and eat directly from a large communal platter without benefit of cutlery or individual plates. The fare includes such familiar items as large pita bread, tabouli, sour pickles and olives. It also includes labani, a white goat’s cheese; pita with za-atar, an indigenous spice that resembles thyme; and chamra, which is pita with a pizza-like tomato sauce and a dash of hot pepper. For dessert, there is honey-soaked baclawa and tea with mint, or rather the more potent “nana” that is grown locally.

Jaber Aburukun, a Druze schoolteacher in Isfiya, addressed our group as we ate lunch, eloquently outlining many of the details of his religion as described above. As Aburukun explained, there are two main tenets of the Druze belief system: first, they are strongly monotheistic, and second, they believe fervently and with their whole hearts in the process of reincarnation. Although they bury their dead, they do not consider the graves of their ancestors as sacred, and eventually re-use all cemetery plots.

“We do not believe in resurrection,” said Aburukun. “We believe that the human being comes back to life as spirit. Not the bones! Only the spirit! So I believe that my grandfather lies not in the grave — he lives again as a young person. We’re not afraid of death, since we believe we’re going to live again. We have interior confidence.”

As the schoolteacher explained, he and his coreligionists believe that there is no heaven or hell, and that the soul of a dying person does not linger in purgatory but proceeds almost immediately after death into a newborn or soon-to-be-born baby.

A cousin of Aburukun’s, a Druze soldier serving in the Israeli military, was tragically killed while on duty in an explosion in 1983, he said. A child born later in a neighbouring Druze village supposedly told his parents, at the age of three or four, that he had another family in a previous life, and accurately described many details of the family of the slain soldier.

“The child knew every member of the family and could describe all the details about living with them,” said Aburukun, who frequently asks children in his class if they remember anything about their past lives. A documentary about the slain Druze soldier and the child who seemingly took over his identity was aired recently on Israeli television.

For the Druze of Isfiya, welcoming visitors into their homes allows them to share in the windfall of tourist dollars that is increasingly flowing into Israel. For visitors, it’s a way to learn about an intriguing religious minority that has co-existed in harmony with the Jews for centuries. ♦

Originally appeared in the Toronto Star. © 1999.