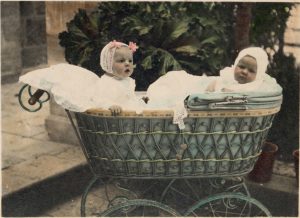 As if attaining genealogical records wasn’t already hard enough, genealogists now have to face a steep new barrier when it comes to getting Ontario birth records.

Quietly, on the sly and when no one was looking, the Ontario Registrar General changed its longstanding rule about how long to wait before birth records may be released to the public via the Archives of Ontario. For many years provincial birth records went to the Archives after 95 years. From there, the Archives would take another couple of years to microfilm them and release them to the public.

But a while back the Registrar General upped this restriction to 104 years. That’s a nine-year difference. They did it “because the population is aging — there were concerns about the privacy of people who were still alive,” Serge Paquet, a reference archivist at the Archives of Ontario, told me.

In keeping with their practice of releasing a new batch of records every spring, the Archives made the 1917 births available last year. However, they won’t be releasing the 1918 births until 2023.

As a genealogist, I’m frustrated by this alarming and gratitous curtailment of our genealogical rights and privileges. Was anyone lobbying for change? Was anyone consulted before the change was imposed? Or was it simply a question of the province intrusively attempting to fix something that wasn’t broken?

My guess is that there are a lot more genealogists around than 103-year-olds worried about privacy. Besides, most centenarians probably appreciate the importance of family history better than some governments seem to do.

Fortunately, the Registrar General hasn’t considered the logical implications of its 104-year regulation, because there has been no concurrent adjustment of the rules for the release of marriage records (after 80 years) and death records (after 70 years). Dear Registrar: please let sleeping dogs lie!

Regarding the 95-year regulation, the Registrar General should have left it alone, too. The rule was strict enough — and indeed, was already stricter than in many other jurisdictions. Ontario’s nanny state strikes again. ♦