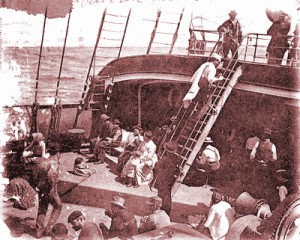 The influx of pauper Hebrew immigrants to this port is increasing to such an extent as to cause considerable uneasiness unless some immediate action is taken for its prevention. It was only a few days ago that a party was landed at Quebec, whch after considerable annoyance wee sent to Montreal where they were handed over to the Baron de Hirsch Institute, which hardly had sufficient space to accommodate them. Another contingent of the same class were landed from the Oregon this morning to the number of 110, but the institute, which appears to have strained a point to look after the former party, declared themselves powerless to shelter this reinforcement, and they were obliged to return to the Oregon until some provision could be made for their disposal.

The members of the last band of refugees are the most miserable looking and most destitute that have yet arrived in this port. Many of them are without effects of any kind, the clothes on their backs forming their only property. Men, women and children, all are poverty stricken, and none are able to speak the language of this country. Some of the families contain seven or eight members, of which several were very young babies, all in an unclean state.

A meeting of the managing committee of the Baron de Hirsch Institute revealed the fact that the exchequer was exhausted and they were powerless to aid the exiles in any way. A cable was sent today to Baron de Hirsch and to Dr. Adler, chief rabbi in England, explaining the state of affairs, but no answer has yet been received. Mr. Aronson stated that the institute had spent between $8,000 and $9,000 this season. There were at present 74 of these refugee Jews on their hands whom they could not get work for. The institute had now 200 Jewish children going to school there, so there was no more room for the paupers who were arriving almost every day.

Mr. Aronson says that the committee on the other side are sending shipments by every vessel, and no notification is received by the committee here till the destitute crowd is landed on the wharf.

Nearly every steamship which arrives brings its complement of Israelites. Since August 10 no less than 552 of these Jews have arrived in Montreal and a good number had arrived before that date. Mr. Aronson says that the committee on the other side are sending shipments by every vessel, and no notification is received by the committee here till the destitute crowd is landed on the wharf. 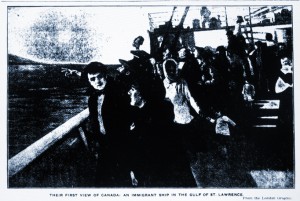 The Government immigration offices are overflowing with Jews. About 60 of them are there, some today’s arrivals and some have been there for several days. What to do with them the immigration officers do no know. Mr. Duly, the Government immigration agent, communicated with Ottawa today for instructions. The statute which was put into force when the steamship Stubbenbuk landed a party of Jews at Quebec has not yet been utilized in the case of the paupers landed in Montreal. Mr. Munderlob of the Hanza Line went to Ottawa and saw Mr. Lowe, the Deputy Minister, in regard to the “Stubbenbuk” matter. Mr. Munderlob offered then to cable to the other side and order the steamship company to refuse to accept any more Jews. Mr. Lowe advised him not to do so, at the same time stating that the Government would look after any future immigrants.

The steamship men state that these immigrants are very undesirable passengers. One steamship agent said today that he believed there was not a little money among the immigrants, but they would not produce it until the last moment. This is denied by the institute people, who express themselves willing to take care of such immigrants if they are provided with the necessary means to do so. It is evident, however, that something must be done, and that quickly, to remedy this evil. ♦