Note: Rabbi Isaac Halpern came to Toronto from New York about 1888 and at first collected rags. He was one of the founders of the Galician Synagogue, Shomrai Shabboth, which first met in a room on Chestnut Street. Halpern fulfilled many rabbinical duties until the arrival of Rabbi Yoseph Weinreb about 1900. When the Shomrai Shabboth congregation split in 1906, one group built the new Teraulay Street Synagogue on what is now Bay Street; the other half stayed on Chestnut with Rabbi Halpern as their spiritual leader. His son, Abraham, became a prominent rabbi in the United States, and his daughter Malca was a nurse who oversaw medical operations for the Federation of the Jewish Philanthropies in Toronto. ◊ 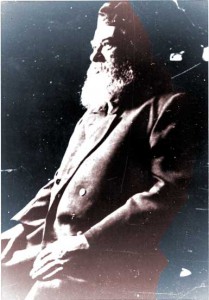 Rabbi Isaac Halpern, one of the oldest Jewish residents of Toronto and founder of the Chestnut Street synagogue, of which he was the rabbi up to the time of his death, died yesterday morning at his home, 231 Beverley Street. Death was due to heart trouble from which he had been suffering for some time.

He came here 33 years ago from New York, where he had been a short time after his arrival there from Austria.

The funeral took place Friday afternoon to the Jones Avenue cemetery and special services were held at the Chestnut Street and Teraulay Street Synagogue. ♦