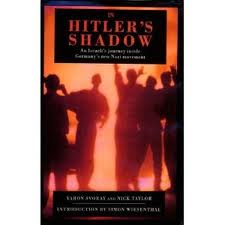 Having boldly infiltrated the top echelons of Germany’s neo-Nazi movement, former Israeli paratrooper Yaron Svoray felt more than mildly uncomfortable the day in 1992 that he sat with about 30 neo-Nazis in the woods and an elderly ex-SS guard put a gun to his ear, screaming, “Juden! Juden!”

Quickly, Svoray leaned forward, out of range of the gun, then reached behind and grabbed and broke his accuser’s hand.

Svoray had previously told his Nazi hosts that he was an emissary of a wealthy American sympathizer who wanted to invest heavily in the neo-Nazi movement. “That’s it, I’ve had it!” he shouted, jumping up. “You guys are nuts, you accuse me of being a Mossad agent, I’m leaving!”

Several others chased after him and apologized, Svoray said, in describing the incident during a talk at the Jewish Book Fair. Svoray is the author (with Nick Taylor) of the recent book, In Hitler’s Shadow (Doubleday, $34.95), which recounts his amazing and courageous journey inside Germany’s neo-Nazi movement.

Svoray, who has worked as an investigative reporter and a detective, met a young neo-Nazi by a fluke on his first trip to Germany, and found they both knew something about German film. “He thought that anyone who knows about German films between the two world wars had to be a Nazi like him.”

His new friend brought Svoray — who used the alias Ron Furey — to a private movie theatre where a group of Nazis watched footage of Hitler, followed by a film of five men raping and murdering an eight-year-old girl. “All the men in the room stood up and shouted ‘Sieg Hiel!’ and I must have lost consciousness,” Svoray said.

“When I came to, I punched my friend in the face, then drove from Frankfurt to Paris — I left my luggage at the hotel — and got on an El Al flight back to Israel. For the next five days, I couldn’t touch my wife or hug my kids.”

With tactical assistance from the Simon Wiesenthal Centre in Los Angeles, Svoray returned to Germany, intent on penetrating to the very heart of the neo-Nazi movement — which he found peopled with multitudes of doctors, lawyers, accountants, bankers and other ordinary Germans.

“The skinheads are more numerous and violent than German police have admitted,” he said. “In the nine months I was there, I was involved in four heavy-duty fights, and I managed to put four neo-Nazis in hospital. There is no greater fun than a Jew beating up Nazis in Germany.”

According to Svoray, some Germans accept responsibility for the Holocaust and want to make reparations, while others express a profound indifference to what happened 50 years ago and care only for beer, soccer and their annual holiday in Majorca.

A third type, Svoray said, vigorously defends the Third Reich, denies that there were ever more than 400,000 Jews in Europe, and asserts that the world would have been a better place if Hitler had prevailed.

“There’s been a huge swing to the right” all across Europe and Russia, Svoray said, noting the re-emergence of the fascist movement in Italy and the rise of politicians like Zhirinovsky in Russia and Le Pen in France. “This is not only happening in Germany, but Germany is at the center of it.”

After going public with his secretly filmed and taped information, Svoray was convinced he would put some of Germany’s neo-Nazis in prison. “It’s been a year since I came out of the closet, and I’m sorry to say that not one of these neo-Nazi guys has gone to jail.” All German politicians have done is enact tougher laws against Nazism, he said, but they do not have the will to enforce them.

Asked about Ernst Zundel, the Toronto purveyor of Nazi propaganda, Svoray said, “He’s considered by the neo-Nazis in Germany as the second best friend they have. Zundel always comes into the conversation — he’s a major player. What I can’t understand is how the Canadians let this guy get away with it.”

An HBO made-for-television movie based on his experiences is currently being produced, Svoray said. ♦