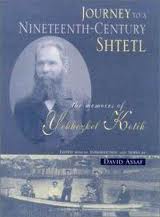 Back about a century and a half ago, the town of Kamenets was a typical Russian-Polish shtetl consisting “of 250 old houses, black and small with shingled roofs,” and with some 450 Jews listed in the Revizski Skazki, the official government registry.

However, most of the town’s Jews did not appear in the registry. Fearful that their sons would be drafted into the army, many simply left town for short periods rather than register with the authorities. Each year, the community leader would pay a steep bribe to a visiting government inspector before the latter, accompanied by the entire town gendarmery, would make his rounds.

“On inspection day many houses were locked up, their tenants fled, and scarcely a living soul was seen in the streets,” Yekhezkel Kotik would recall. “The place resembled a ghost town — a cemetery . . . . (But) like every prior year, the inspector left Kamenets after signing the protocol that everything was in perfect order.”

The author’s colourful reminiscences include a description of the short-lived “panic of 1842”, when a widespread rumour suggested the government would soon prohibit Jews from marrying before the age of twenty. “Whoever had an eight-year-old son or daughter wasted no time in marrying him or her off,” he writes. “In order to keep the police in the dark, the marriages took place in utter secrecy and without lavish ceremony.”

Kotik, who began writing his memoirs in his mid-sixties, demonstrates a thorough, preternatural knowledge of events that transpired before his birth, many involving his prominent grandparents and great-grandparents. He describes the shtetl’s rich religious and social life as well as the bitter divisions between the Hasidim and their philosophical opponents, the Mitnagdim, which seriously affected relations between himself and his father.

As his influential grandfather consorted with many lords, Kotik devotes much attention to the complex relations between the Polish nobility, the Jews who often worked for them, and the peasant underclass. He also recounts the liberation of the serfs and the Polish rebellion of 1863, upheavals that altered the region’s feudal character and brought it into the modern age.

As editor David Attaf notes, it was modernity — not the catastrophe of war — that brought the old-fashioned, intimate world that Kotik paints to an end. “By 1912, the rapid pace of modernization and the inroads made by emigration, urbanization, industrialization, and secularization made it self-evident to many that the old shtetl was disappearing,” Attaf observes in a wonderful introductory essay. The text is also graced by his scholarly editorial notes.

No less a literary critic than Sholom Aleichem called Kotik’s memoir “a treasure, a garden” and “a paradise full of blossoming flowers and singing birds.” Thanks to this new translation, these delights are now accessible to English readers as well. ♦