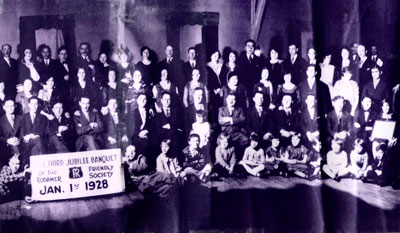 As Jews from Eastern European countries began to settle in Toronto and other urban areas, they formed landsmanshaften, groups of individuals from the same area or shtetI.

Along with the friendships, camaraderie and the social aspects of the landsmanshaft, these societies fulfilled many other needs of the immigrants. They arranged for funerals and purchased burial grounds, provided loans and sick benefits, established synagogues, and created networks of like-minded people.

For many of its members, the groups created a link for them to their former communities and a place to memorialize their loved ones.

As survivors of the Holocaust arrived, they were welcomed by the members of the societies who could relate to them and who could help them keep alive the memories of their once vibrant cities and towns. And many shared a common language — Yiddish.

Many societies formed women’s auxiliaries and sisterhoods that have been very active parts of the landsmanshaften. Women of the Apter, Chenstochover, Chmeilnicker, Massada chapter, Lodzer, Stashiver, Stopnitzer, Warshaver and others work tirelessly to raise money for local and Israeli charities.

Today, many of the members of the societies are retired seniors who have attempted to involve their children and grandchildren without much success.

Jack Stopper, 89, has been a member of the Driltzer Young Men’s Society for more than 60 years. In 1934, he was asked by the members of Anshe Driltz, many in their 70s and 80s, to form a group for younger members.

The Driltzer Young Men’s Society has 80 members. Although Stopper’s daughters Ruthie Greenberg and Rochelle Sufrin are members and attend some of the functions, like others of the second and third generations, they do not take an active role in the organization.

Stopper explains that the members meet on Sunday mornings for davening at the building they own on Wilson Avenue. They conduct services on the High Holy Days and hold meetings every two weeks. He adds that although they are trying to keep the society operating, many of their members have died and it is becoming more and more difficult for their aging members.

Like many of the landsmanshaften, a major role for their members is fundraising. Stopper says they contribute to Israeli soldiers, the Baycrest Centre and the United Jewish Appeal. Although their membership is $50 a year, they receive rental from their building and they hold fundraising events.

“It is my hope that the third generation will take over and continue to do good work and keep the good name of Driltz,” he says.

Mike Rosenberg, co-chair of the Society Division Cabinet of UJA, believes that the phenomenon of landsmanshaften of the 20th century, “which were formed to help them find comfort from each other will disappear in the next decade or two.”

A Holocaust survivor who came from Szydlowiec, Rosenberg was told shortly after he arrived in Canada in 1948 that “you must belong somewhere.” As there was no society from his small town in Poland, he joined the Wierzbniker Friendly Society where his friend’s wife comes from, primarily “to get clients for my printing business.”

He praised the societies that hosted the Holocaust survivors for a short time until “they could create ties with others who had similar histories.” He says that the children of survivors have entered the professions and as a consequence they have joined professional organizations and synagogues rather than join their parent’s society.

“All of the mutual and sick benefits are going by the wayside and are no longer relevant,” says Rosenberg. “With declining memberships,” he adds, “it is only a question of time until these societies disappear.” ♦

Note: This article appeared originally in the Canadian Jewish News in September 1997 and is reprinted courtesy of the author. © 1997 by Cynthia Gasner.