THIS article, by an unknown writer, is reprinted from the Toronto Telegram of July 7, 1928, along with the photo, restored from the microfilm. The photo at bottom, with an earlier view of “Old Bay Street,” has been added. 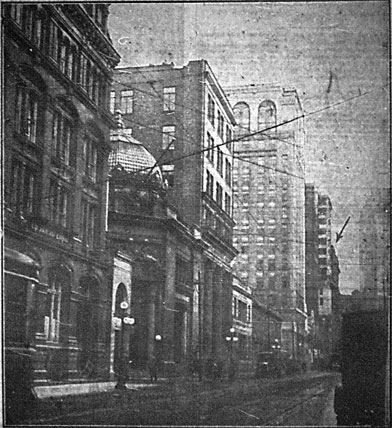 the Temple Building used to loom up on the west side of Bay Street like the rock of Gibraltar?

That was not so very many years ago, but look at it now! An arrow is needed to locate that very fine office building amid the newer and taller structures that are turning old Bay street into the Wall street of Toronto. The term “old Bay street” is used to designate the part of the street below Queen, named Bay street originally, before Terauley street and extensions were added.

Corner stone of the Temple Building tells how it was laid in 1895 by the Earl of Aberdeen, in the great days when Dr. Oronhyatekha was head of the Foresters, and the order was branching out with a Temple which was the pride of Canada, both as a lodge and office building.

Bay street was then a quiet tree-shaded thoroughfare with a macadam roadway and wooden sidewalks just giving way to concrete. Its buildings were of a mixed character, but a solemn row of residences, all occupied by physicians of outstanding reputation, occupied the Temple Building site.

When the great eight-storey structure was completed it quite dominated the whole downtown landscape. Dr. Oronhyatekha was hailed as a marvel because, in spite of forebodings of the conservative, the office space in the Temple was all taken up. It was prophesied that it “would empty downtown Toronto to fill it.”

Sight-seeing parties were conducted to the roof of the Temple Building much as people are now taken to the Woolworth Building tower in New York, and they had a view from thence all over Toronto. Times have changed, and Bay street has changed with them. ♦

Note: For a great illustrated story on the Temple Building as “Toronto’s first skyscraper,” see Kevin Plummer’s story at http://torontoist.com/2008/08/historicist_torontos_first_skyscrap/ 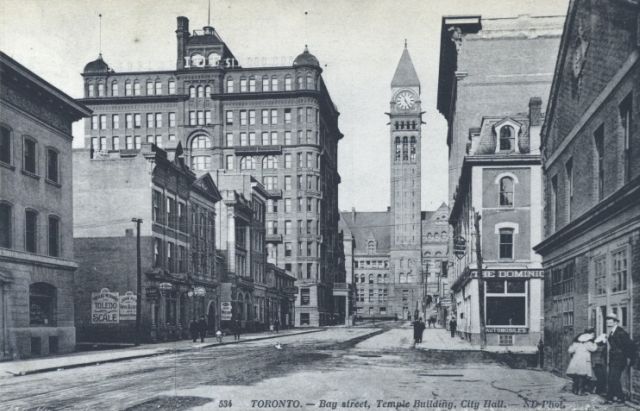