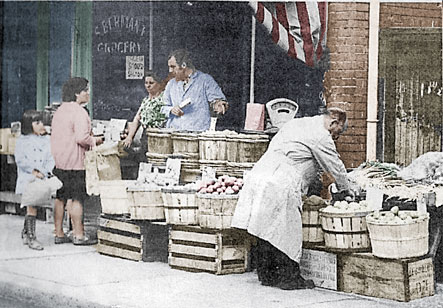 Longtime friends of commercial and real estate lawyer Sam Moskowitz refer to him affectionately as “the son of the pickle man.”

If you ask him what pickles and law have in common, he will tell you “everything.”

His fond memories of his parents’ store at 186 Baldwin St., filled with barrels of pickles, herring, tomatoes, cabbage and numerous other products, have left him with a love of preparing foods for his family and friends.

And many of his parents’ customers have become his clients.

“That store gave me the opportunity to get an education. It was my parents and other immigrant parents who worked tirelessly in order to give my generation a wonderful profession and lifestyle,” Moskowitz said in an interview.

His parents, Isaac and Faiga Moskowitz, lived through many horrors in their youth, he said.

Isaac, who was born and raised in Lodz, Poland, fled his homeland in 1939. He was in his early 20s and like many other fleeing Polish Jews, he was arrested near the Russian border and sent to do slave labor in the salt mines of Siberia.

Isaac Moskowitz met Faiga Levin from Kiev in Uzbekistan and they married in 1945.

Shortly afterward, they fled from Russia illegally, by bribing the border police. Sam Moskowitz was born at Stettin, a port city on the Baltic Sea; the couple were in transit.

Unable to find any of their family members, after the Kielce pogrom, they once again ran, finding their way to a DP camp in Regensburg, Germany, where they remained for three years. In Regensburg, they found Isaac’s brother, also named Sam, who had survived Auschwitz.

In 1949, Moskowitz and his parents went to Israel where they settled in Kfar Yavne, near Rechovot. Isaac ran a fish store and Moskowitz has vivid memories of watching the live fish in his father’s cement tank.

Customers selected their fish and carried the live fish home unwrapped, because there was no wrapping paper.

After 10 years in Israel, Moskowitz, who was then a teenager, came with his parents to Canada.

He said they had good fortune when they rented a room above a Jewish grocery store on Baldwin Street owned by Anna Bermant, a widow who let them sell eggs and pickles and other products prepared by his mother and father.

“They worked seven days a week and when I came home from Harbord Collegiate, I would help them and Mrs. Bermant,” Moskowitz recalled. “I worked with my parents at night making the products in wooden barrels and since my father didn’t drive, I went with him by bus to the market in the early hours of the morning, As well, during the summer vacation, I worked at Shopsy’s on Spadina Avenue.

“And for the first few years after I opened my law practice, I continued to drive my father to the Ontario Food Terminal in Etobicoke at 4 o’clock in the morning.”

While at law school, Sam married Shelly Reisman. They have four children. Moskowitz’ father died 13 years ago and his mother passed away recently (1996).

Along with his passion for cooking, baking and preparing traditional pickled products learned from his parents, Moskowitz is actively involved in the community.

He is on the board of the Shaarei Shomayim Congregation and he recently organized an afternoon minyan at the Minsker Synagogue on St. Andrews Street in the Kensington Market.

“My office isn’t far from the Kensington Market; so every day I am reminded of my roots and I’m grateful to my parents for giving me guidance and business experience.

“Many times I say that running a law practice is like being in a store because you have to satisfy your customers or clients. And sometimes they ask me for pickles along with my advice.” ♦

Note: This article appeared originally in the Canadian Jewish News and is reprinted courtesy of the author. © 1996 by Cynthia Gasner.