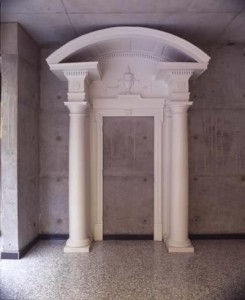 There is now a vacant lot where the house on 42 St. George Street stood.

All that is left of Mendel Granatstein’s home, a property which is now owned by the University of Toronto, is the front portico.

According to Heritage Toronto records, the home was the first in Toronto to be owned by a Jew.

It was demolished in 1999, despite an appeal by Sheldon Godfrey, a former chair of Heritage Canada Foundation, to have the building designated as a historical site under the Ontario Heritage Act.

Granatstein, a co-founder of the Henry Street Shul (now Beth Jacob Synagogue), is to be honoured by the university.

“I’ll be there with bells on,” said his grandson, Marvin Fremes, former president of the Jewish Vocational Service, now retired.

Granatstein will be honoured with a plaque. The date of the ceremony and the nature of the new building have not yet been set, Fremes said.

“My grandfather built a grand house on St. George Street to be close enough to walk to his shul on Henry Street,” said Fremes. “I walked with him on many Saturdays. It was a big house with a permanent sukkah and chauffeur’s quarters.”

His grandfather came to Toronto before 1880. He was owner of M. Granatstein and Son, processors of rags, which occupied a building on Wellington Street, west of Spadina Avenue. 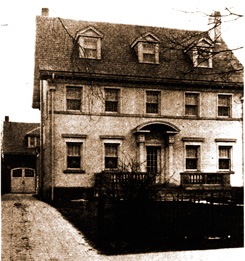 Granatstein was the first Canadian Jew to negotiate a labour contract with a union guaranteeing his employees the right to leave work early on Fridays to observe Shabbat. Workers were also not required to make up the time Saturday nights after Shabbat ended, as was required before the contract was signed.

“It worked out well during World War I, but after the war, there was a strike, which the union lost, mostly because of scabs,” said Morris Biderman, author of A Life on the Jewish Left, An Immigrant’s Experience.

Fremes’s mother, Gertrude, was the only daughter in a family of seven children.

One of Mandel Granatstein’s descendants is Jack Granatstein, former history of professor at University of Toronto.

According to Rabbi Moses Burak, Mandel Granatstein’s name is listed on a plaque as honorary treasurer of the Henry Street shul, now ensconced in the foyer of the present Beth Jacob Synagogue at the corner of Wilmington and Overbrook.

“My grandfather fled from Poland just a jump and a half ahead of the Russian army. When he came to Toronto a lot of Jews eked out a precarious living with a horse and wagon, going through the streets, cryng out,  ‘rags, bones.’

“My anti-Semitic schoolmates called people like my grandfather ‘sheenies.’ ”

The building on Henry Street is now the Trinity Christian Orthodox Church. ♦

◊ The Granatstein house at 42 St. George Street was designed by Brown and McConnell and built in 1919-20, occupying a quarter-acre on the west side of the street, north of College Street, within the University of Toronto area. The three-storey dwelling of classical Georgian architecture included a room designed with a retractable roof so that the family could mark the Sukkot harvest holiday, during which observant Jews sleep outside. The home was acquired by the university in 1947 and was demolished to make room for the Bahen Centre in 1999.

You may also wish to read J. S. Granatstein runs for alderman, 1906.