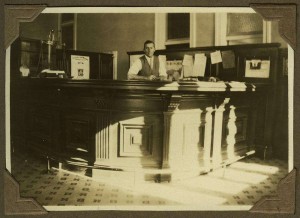 That Toronto in common with American cities has an increasing foreign population is shown in many ways, but in none more clearly than in the fact that a bank established recently especially to accommodate foreign residents is already doing a fairly good business.

Many of the foreign residents are naturalized citizens, but using strange languages and following strange customs they are as a matter of fact still foreigners.

In this connection it is interesting to note that three-fifths of the property in that part of the city which is called “the Ward,” which property is rapidly increasing in value, is owned by Jews. Of the other two-fifths, a good share belongs to the Italians.

He is Ignorant, but Clever.

The Jews are particularly successful business men. For instance, one came to the city a short time ago who in an American city had got together a fortune of $100,000 by investments in real estate. He bought a property in the business portion of the city for $20,000 and sold it within two weeks at a profit of $2,000. Yet this man could not read or write a word of English, and could not speak it very fluently.

The rising generation of Jews, of course, attend Canadian schools, and do not work under the same disadvantages as their fathers, but of the older generation many have acquired comfortable fortunes in spite of disadvantages. A man who knows them well told The Star members of the race were whom if you met them on the street you might not think to be worth five dollars, could on very short notice lay their hands on upwards of fifty thousand dollars.

They Are a Saving Race.

Then the Jews are a saving race. The Jewish workman, no matter how small his earning may be, will be found to be laying aside a little week by week. Therefore there was plenty of business awaiting the bank when it opened up a branch right in the middle of the Ward and secured as its manager one of the leading Jewish residents of the district.

As far as outward appearance goes, there is little difference in this bank from any other, except that the bank’s name is printed in Jewish characters on the windows as well as in English. The manager is able to speak to the customers of the bank in their own language and in this way the difficulty of foreigners in doing their banking business is largely overcome.

When it came to conducting the business the ordinary banker would not feel very much at home. The majority of the clients speak only broken English if any at all. Others speak a great variety of languages, but no English. Deposit slips, etc., are printed in Yiddish characters.

Many who come in not only have a very limited knowledge of English, but no knowledge of banking. That means that the gentleman behind the wicket has to forego formality, leave his pint of vantage and go around to the front, explain the first principles, and make out the deposit slip himself.

While the Star’s reporter was in the bank the other day a newly-married couple came to deposit the wife’s pay. Rosie could speak English, Louis could not. Rosie was able only to make her mark. Louis signed his name in Yiddish. The conversation between the manager’s assistant and the new clients was carried on partly in English, partly in German, with a little Yiddish mixed in now and then. Rosie had had experience in banking before, and was stipulated that the account was to be arranged that both would have to call in order to withdraw anything.

The branch also receives children’s deposits, and has clients as young as three years of age. Jewish parents always provide well for their children, and a great many working have already formed the habit of giving their children twenty-five cents weekly to deposit in their own names.

One lad of four years of age came into the bank and opened an account with a deposit of fifty cents. He was given the usual pass book, and pocketed it without any comment. After he got outside he looked the book over, and, coming back, threw it on the counter in disgust.

The Jews stick together in every way, and especially so in business, and therefore are always willing to accommodate one another. Notes are generally used for this purpose, and in this way may supply business for the bank. Drafts have already been demanded upon Germany, Austria, Italy, Russia, Turkey, Greece, Asia Minor, Egypt, and Palestine. ♦