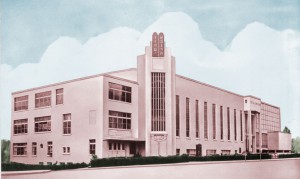 Mildred, the younger of two daughters of Harry and Fanny Arnoff, died of nephritis (kidney disease) in 1946 at the age of sixteen. Harry and Fanny and daughter Lillian became early members of the Beth Sholom soon after moving to Croydon Road in 1947.

Harry and Fanny were my great uncle and aunt and I remember them well. Today my cousin Lilian still recalls the proud and solemn moment as her parents cut the ribbon to open the school named after her sister. Rabbi David Monson, she said, was forever grateful to her parents for donating the $10,000 cost of the school.

Harry, a partner in the Continental Rug Company, was a long-serving member of Beth Sholom’s executive and became president after Leon Offman. Fanny was active in the Sisterhood, which put on plays and raised money for the congregation. She also sang in the Sisterhood Choir, which performed fund-raising concerts. 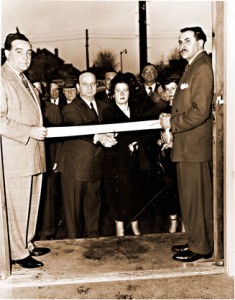 When the school opened, Offman was synagogue president, Azriel Karney the school principal, Rhoda Englander the director of youth activities, Lou Cappe the educational chairman, Anne Ceresne the Sisterhood president, Harry Polevoy the congregational secretary. All delivered messages of congratulations. Polevoy noted that, with the opening of the school, “another memorable step has been taken in this wonderful project of ours which is well known as the ‘Miracle of Eglinton Avenue.’” The synagogue printed a 60-page programme, filling about a dozen pages with articles, information and photos, the rest with ads. 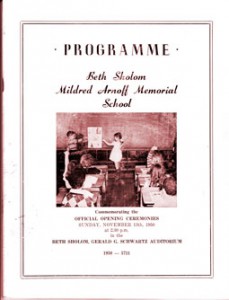 Apparently the shul’s Talmud Torah classes were already under way before the school was built, with 160 pupils and 42 nursery pupils enrolled in 1948-49, and 218 pupils and 44 nursery pupils in 1949-50. Several classroom photos identify Faygie Weingarten, Muriel Schwartz, Pauline Rubinoff and Harold Langner as teachers. Another was Honey Tulchinsky (Tully), also an Arnoff cousin.

My cousin Harvey Naftolin still remembers participating in the school opening ceremonies in the Gerald G. Schwartz Auditorium, and attending the Hebrew school four afternoons a week after regular school hours, and on Sunday mornings. He studied for his bar mitzvah with Rabbi Mendel Kirshenblatt, who was “rabbi sheni” (second rabbi) to Rabbi Monson.

Harvey’s parents, my aunt and uncle Morris (“Nafty”) and Ida Naftolin, were among the original members of Beth Sholom. For four years after his bar mitzvah, Harvey was president of the Beth Sholom Tefilin Club. He was also involved in B’nai Beth Sholom, a B’nai Brith youth group that met at the synagogue on Sundays. “We had meetings and dances and outings, and from time to time we ran the Friday night services – we dressed in robes and conducted the entire service.”

“It was a whole different sort of life,” he adds. “The shul was where we went . . . today kids are just too busy with everything else.” 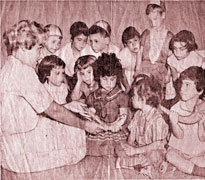 Harvey also sang in the downstairs choir organized by Sam Frankel, who ran the downstairs services on the High Holidays. “He would be downstairs and the fancy seats would be upstairs,” Harvey said. “I sang in Sam Frankel’s choir for about ten years, as I recall. Even after I was married, I still sang there for a few years.” 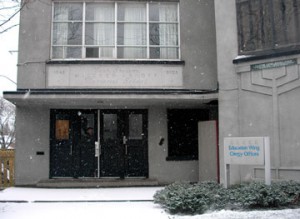 All of these stories have become part of our collective family lore – but our various connections with Beth Sholom and Rabbi Monson go back even further. My father, Russell Gladstone, served in the Armed Forces for five years during the Second World War, and knew Rabbi Monson as his military chaplain overseas. A year after his return, he married my mother, Shirley Naftolin, in a service that Monson performed at the B’nai Israel Synagogue downtown on Shaw Street. When my father died in 1988, Rabbi Monson delivered a splendid eulogy.

I spoke with Monson a few times in his later years, and each time he made sure to mention how grateful he was to the related Arnoff, Naftolin and Rubinoff families, and our family society the Agudas Hamishpocha as a whole, for helping to put the Beth Sholom Synagogue “on the map.” ♦

Just a short note to let you know once again how much fun I have looking over your column. I read it out loud to my husband and we both have a good laugh. We know so many people mentioned here and it brings back mostly very good memories of Toronto. This time it was a nice surprise to see our old friend. Harvey Naftolin, your cousin, discussing his early days at Beth Sholom . . . and yes, Harvey had a beautiful voice. I say “had”, because it’s been over 40 years since we last heard him sing. — E.S., Fullerton, CA (January 2013)

I recently came across your May 9, 2012 article, “Mishpocha Memories at Beth Sholom,” which I enjoyed reading very much. Having grown up in Toronto, having davened countless times at Beth Sholom (where I attended shabbes services virtually every week and where I had my Bar Mitzvah on March 15, 1958), and having attended the Mildred Arnoff memorial School for 5 or 6 years, 5 times per week, remembering Mr. Karney and many of the other teachers I had there (Mr. Sturion, Mr. and Mrs. Rappaport), I really got a kick out of the memories that your article invoked. My parents were founding members and active members of B.S. We used to sit downstairs for the Yom Tovim, and well recall Harvey Naftolin’s beautiful voice. . . . — F.B., London, Ontario (June 2019)