From The Canadian Jewish Review, September 8, 1922. 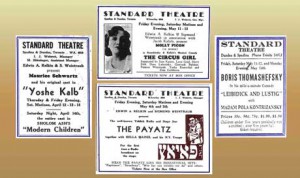 The popularity of the Jewish play in Toronto received a decided impetus with the formal opening of the Standard Theater on Wednesday. The theater was filled to capacity at this, the first Yiddish presented in Toronto in some years.

The audience was more than agreeably surprised on entering the theater. While the outside is plain and unimposing, the interior is most artistically decorated, pale blue and gold predominating.

Apart from the excellence of the fixtures, of the mural decorations and of the conveniences throughout the theater, the seating plan allows for capacity audiences, for there is complete visibility from any seat in the theater. The edifice is unqualifiedly one of the finest of its class in North America, and is a monument to Jewish enterprise in the city.

The opening ceremonies commenced at a quarter to eight. A choir of male soprano voices sang several selections, which were well received. Mr. E. F. Singer, in the chair, addressed the audience, recounting the difficulties experienced in attempting an enterprise so great.

Messrs. Axler, Pasternack, and Littman, all prominently connected with the management of the theater, delivered brief addresses, in which they outlined the program for the next few months. Mayor Maguire congratulated the Jews of Toronto on having acquired the theater, and on possessing men with courage and foresight to undertake so difficult an enterprise.

The play itself is a melodrama in three acts called, “An Eye For An Eye,” by Anshel Shor. It tells of one Morris Feinstein, who, falsely accused of the murder of his wife, leaves his little daughter with a pawnbroker. The latter promises faithfully to take care of the girl and to reveal her identity to her not until her twenty-first birthday.

Twenty years later, Feinstein comes back from prison and tells his grown-up daughter who she really is. In the last act, the murderer, by the united efforts of father and daughter, is discovered and forced to confess. Jacob Cohn and Jeannette Paskevich interpret the roles of the father and daughter with great dramatic ability, and they satisfy all expectations.

The playwright is extremely versatile — one moment the scene is ridiculously mirthful, the next moment it is full of intense dramatic feeling. The cast is to be congratulated on the efficient way in which they overcame the difficulties they encountered. The success of this performance augurs well for future presentations. ♦

Inspector Ballingall of the Toronto Humane Society literally stepped into the limelight last night when, in the course of his duties he unwittingly queried an act at the Standard Theatre, Spadina avenue.

Advised by the officers of number three police station that a horse had been tied in a lane at the back of the theatre for two or three hours, and that it was uncovered, he brought an assistant and took the animal away.

Inside the theatre, a blacksmith’s scene was in progress, the smith appeared and assistants went to lead on the horse. To their consternation it was not to be found.

A frantic search failed to provide a substitute, so that in spite of much stalling on the part of the actors, the curtain had to be rung down and the act was queered.

Meanwhile Dobbin was munching a good feed contentedly in the stables of the society. ♦