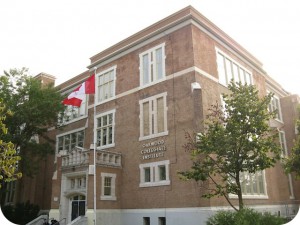 From April 30 to May 4 (2008), hundreds of former and current OCI students came out to celebrate, with some alumni travelling great distances to meet and mingle with friends and former classmates, some of whom they had not seen for more than 30 years.

The weekend activities included a music night at the Toronto Centre for the Arts, where alumni and present-day students performed for an enthusiastic, full-to-capacity audience of 1,000.

There was a gala dinner and dance, a golf day, a pub night at the school, located on St. Clair Avenue at Oakwood Avenue, the opening of an archives room and the rededication of a war memorial.

“It was a lot of work, but it was also a lot of fun,” said Charles Marmoreo (class of 1958), who is in structural steel drafting. “And we had a great deal of co-operation from many people.”

Marmoreo, president of OCI’s alumni association and John Iaboni (1970), a sportswriter for the Toronto Sun, co-chaired the 100th anniversary event.

Marmoreo spoke of his recollections of his years at Oakwood. He said that in the 1940s and 1950s, many of the classes had a majority of Jewish students.

“Whenever Passover and other holidays came around, we went down to about two students in the class,” he said.

Alumnus Louise (Rappaport) Starkman (1959) said alumni and current Oakwood students worked together and did a “phenomenal job” on the reunion, particularly in assembling class photos and memorabilia and setting up decade rooms.

She noted that the oldest graduate to attend was 97 years old “and he still participates in many activities.”

She added: “The gala was spectacular and at the pub night, it was run meeting former students as well as teachers, and sharing memories.”

Over the years, the student mix at Oakwood has changed to include many people of Italian descent, and today it has a very ethnically mixed student population.

Starkman spoke of the outstanding teachers past and present in the departments of sciences, arts and sports. “The Oakwood teachers influenced whole generations of students.”

Bruce Snell, a former music teacher attended the reunion. Starkman noted that former students such as Dr. Michael Baker, a professor and physician-in-chief at the University Health Network, played in the school’s orchestra and continues to play music.

Baker said he is proud that his children, Jeffrey and Jennifer, attended Oakwood and were also scholarship winners.

A City of Toronto plaque at the corner of St. Clair and Oakwood reads:

A large field greeted Toronto Board of Education officials who needed to build a school in 1908. Oakwood Collegiate finally opened in 1912. Students moved from the school’s temporary location of King Edward Public School on Bathurst Street to the stately building at the corner of Oakwood Avenue and St. Clair Avenue West.

The school stood alone though. Concerned parents didn’t want their children trekking over half a mile to school from the TTC car lines. A school trustee said the walk would “do them good.”

Students walked on wooden-planked sidewalks to what would become one of the largest schools in Ontario by 1920. Shops, restaurants, houses and the TTC car lines soon enriched the neighbourhood, which had Oakwood Collegiate at its heart. Graduates made their mark in the arts, science, sports, and in two world wars.

Community members still cheer on Oakwood’s teams, marvel at students’ plays, concerts and fashion shows, and hope for the best during final exams. Preston McLeod, the 1921 valedictorian, illustrated the Oakwood experience at commencement: “. . . When the name of O.C.I. shall be clarioned forth . . . we of a humbler day shall be proud and ready to proclaim to all the world, “We went to that school!” ♦