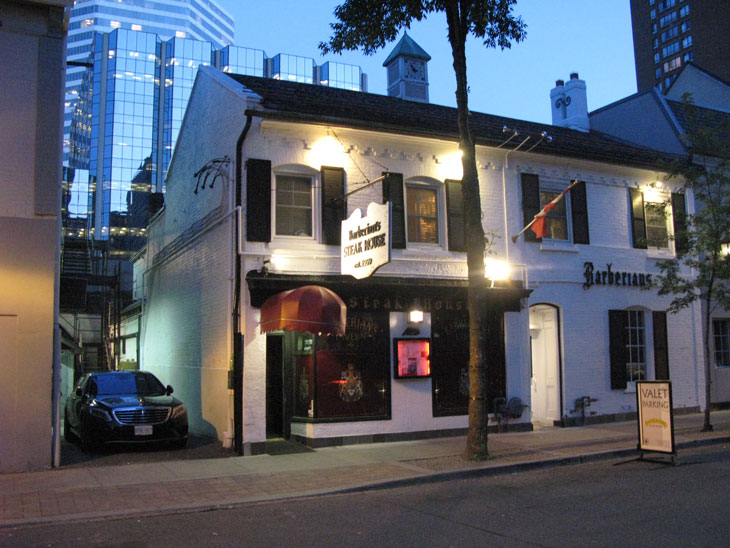 Harry Barberian, who began his culinary career as a short order cook in a circus railroad dining car, and went on to found the landmark Toronto steakhouse that bears his name, has died after complications from abdominal surgery. He was 71.

His restaurant, Barberian’s, specialized in steaks — New York, porterhouse, rib-eye, sirloin — but it was Mr. Barberian who usually provided the sizzle.

“He was a showman on the grill,” said his wife, Helen, recalling her first impressions of him in the eatery’s early days. “He would flip the steaks and dance with them. He was so entertaining.”

He opened the restaurant in 1959 and it soon began to attract a wide gamut of patrons, including actors Richard Burton and Elizabeth Taylor, who were engaged there in 1964. Hockey fans would jam the place before a game at Maple Leaf Gardens. Doctors, nurses and orderlies flocked there from nearby hospitals. Ballet, music, theatre and auto racing enthusiasts also made it a haven. Mr. Barberian greeted everyone with his customary warmth, turning many into friends.

“Harry was the prototypical professional host,” said Dr. Hugh Scully, the senior cardiac surgeon at Toronto General Hospital, who, with his wife, Vanessa Harwood, a former principal ballerina with the National Ballet, became good friends with the restaurateur and his family. “He was always warm and welcoming. It didn’t matter if he knew you or not. He was always at the door, greeting you.”
Located on Elm Street a few doors west of Yonge, Barberian’s is housed in a renovated 1860 building that boasts an heraldic emblem out front and, inside, a cosy old-fashioned decor, dimly lit as though by lantern light. Besides the linen-covered tables, it is filled with rare artifacts and minor paintings of the Group of Seven that reflect the owner’s passion for Canadian history. “It looks like what a steak house should look like,” said its manager, Jon Andrews. “It’s kind of a throwback to an older time.”

Although he never severed his financial involvement, Mr. Barberian gave up the restaurant for 18 years and became a consultant to the food and hospitality industry. He also opened Harry’s Steakhouse and other dining establishments in Toronto as well as Florida, where he wintered. He resumed his hostly duties at Barberian’s in 1995.

The youngest of four children born to Armenian refugee parents in Brantford, Ont., Harry left grade eight to work with his father in a foundry. Over time he tried other professional roles –including that of actor by taking a minor part in a production of Laura. “He walked on stage and knocked over the scenery and got the biggest laugh of anyone,” said his wife.

Food, he discovered, was his forte. When his brother won a restaurant in a crap game, Harry ran it for six months until his brother lost it in another crap game. He became a short-order cook in Brantford and ran a hot-dog stand at Wasaga Beach. In 1954 he started working at Le Baron, a pioneering open-hearth steakhouse in Toronto, and rose to manager-chef. After five years, seeing he could rise no further, he purchased an old cottage on Elm St. for $6,000 and went into business for himself.

As a consultant, Mr. Barberian emphasized the supreme importance of the menu in determining a restaurant’s success or failure. He helped to launch some two dozen eating establishments in Canada, the United States, Mexico and England.

He also wrote many articles on restaurant science and otherwise shared his knowledge freely. Toronto’s “Honest” Ed Mirvish credits him with the concept for Ed’s Warehouse, his roast-beef-only emporium that closed last year after 35 years of operation on Toronto’s King Street West. Mr. Mirvish inscribed a copy of the original menu, “To Harry Barberian. He taught me the restaurant business in 10 minutes.”

“If I had a mentor at all in the restaurant business, it would have been Harry,” said Bob Sniderman, owner of Toronto’s Torch Bistro, formerly the Senator’s Steakhouse. “He was just filled with so much expertise and so many anecdotes.”

Having grown up near a Mohawk reserve, Mr. Barberian was intensely interested in the Metis and Native peoples, and collected many items related to their history. Two years ago he gave much rare and valuable paraphernalia — books, diaries, maps, photographs, medals, rifles and other artifacts — to the Metis Nation of Ontario.

Not surprisingly, officials of that Ottawa-based organization often meet in Barberian’s private dining-room upstairs, when in Toronto. “Harry would inevitably bring out some books or something that he had found somewhere,” said Tony Belcourt, its president. “He was always amazing in that way. He’d come and exchange stories. We always had a great time with him.”

Once, a waiter informed Mr. B. that a portly stranger was puttering about the kitchen, and he went back to find Robert Morley, the actor, tasting the soup. The guest book also includes signatures from James Beard, Rudolf Nureyev, Veronica Tennant, Mick Jagger, Denzel Washington, Eminem and many other celebrities. Many of Canada’s premiers once cloistered themselves upstairs to discuss the Meech Lake accord, and Brian Mulroney still visits occasionally.

Although Mr. Barberian talked by “burp speech,” having undergone a laryngectomy and tracheostomy 25 years ago, he was an enthusiastic conversationalist and raconteur. His wife and friends recall an irrepressibly happy person who was kind, funny, and always helping others.

“He used to tell me, ‘Time is love. Do what you love doing. Money is the byproduct,'” she said.

Besides Helen, he is survived by sons Arron and Michael, a sister Sue, and four grandchildren. ♦