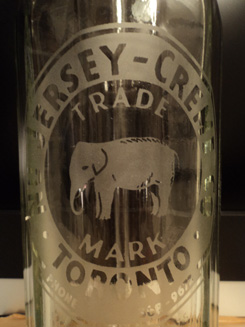 Sam Goldhar, age 62, and his sons Bernie, 33, and Jack 29, were purveyors of Nu-Jersey Creme seltzer via their company, Jersey Creme Beverage Distributing Co. Ltd., located at 299 Manning Avenue, according to a story in the Canadian Jewish News of July 4, 1985.

The seltzer came spouting out of genuine, original Nu-Jersey Creme seltzer siphon bottles, and was sold to specialty retail outlets or by the bottle (plus a $10 deposit for the siphon) to seltzer lovers at their storefront.  Customers used to come from as far away as London and Ottawa to buy the old-fashioned elixir, Bernie Goldhar recalled.

Centenarian Nathan Gold celebrated achieving his 100th birthday at Baycrest Centre, the Canadian Jewish News of June 10, 1982 reported. Gold was a retired Toronto businessman who once worked as a tailor for Eaton’s and later owned and operated men’s apparel stores and haberdasheries in the downtown area. He was a contributor to the Baycrest book, From Our Lives, when he was a resident at the Baycrest Terrace in 1979.

He also recalled that he opened a press-while-you-wait and clean-while-you-wait service in the downtown area. “I had 25 dressing rooms in the store,” he said. “Each room had a little bench. A customer would come in, take off his suit, and we had it pressed in minutes. I was the first one to do that.”

“My father was an institution,” said Gold’s daughter, Lillian Messigner. “Then, as now, it was a brokers’ area and he was just one of the boys.”

Gold was born in 1882 near Maleshkavitz, Russia. He escaped across the border in 1902 and came to New York via Rotterdam. He came to Toronto at the urging of a cousin here who was a coat designer. He married Bessie (Elizabeth) Olch in 1905 and had daughters Susan (Smith), Lillian (Messinger) and Dorothy (Cohen), and a son, Arthur Cohen. They lived on Brunswick Avenue; Bessie died in 1959.

“The secret of happiness is to make yourself happy,” he said. “You cannot sit and cry over your past, because the past is gone forever. We must live for the future — whatever God will give us.” 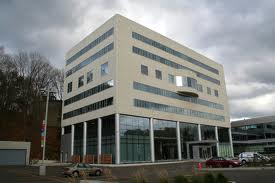 Lipa Green worked for Jewish causes and agencies his whole life without ever receiving official recognition for his efforts, and that is why two of his sons, Al Green and Harold Green, wanted to named the newly opened Jewish Community Services Building, known as the Lipa Green Building, in his honour.

“If an issue had Yiddish content, our father identified with it and became involved,” said Al Green in an interview with the Canadian Jewish News that appeared in the paper on September 15, 1983.

Lipa Green had been a founder and senior partner in Greenwin Construction Company until his retirement in 1970, and he died in December 1976. In his earlier years, after the Second World War, he always tried to help find jobs for immigrants, both Jews and non-Jews, his sons said. Both Al and Harold Green were deeply involved in the planning and construction of the Lipa Green building.

Lipa Green’s children, grandchildren and great-grandchildren came out in full force for the dedication of the new building, which was nearing completion in September 1983 only two years after the official groundbreaking ceremony.

Regina Grinstein was the proprietor of Regina’s, the prepared foods store that opened in the plaza at Sheppard Avenue near Wilmington Avenue about 1965, according to a story that appeared in the Canadian Jewish News on June 16, 1983.

Grinstein, a mother of two grown sons and grandmother of four, and husband Chaim had previously operated a small country store in Jackson’s Point for two years. “At that time, we lived behind the store. I never had time to go to the beach or enjoy the cottage country,” she said.

Her store was famous for its soups, chopped fish, baked goods and other items. In 1983 she opened a second store at 180 Steeles Avenue West. ♦