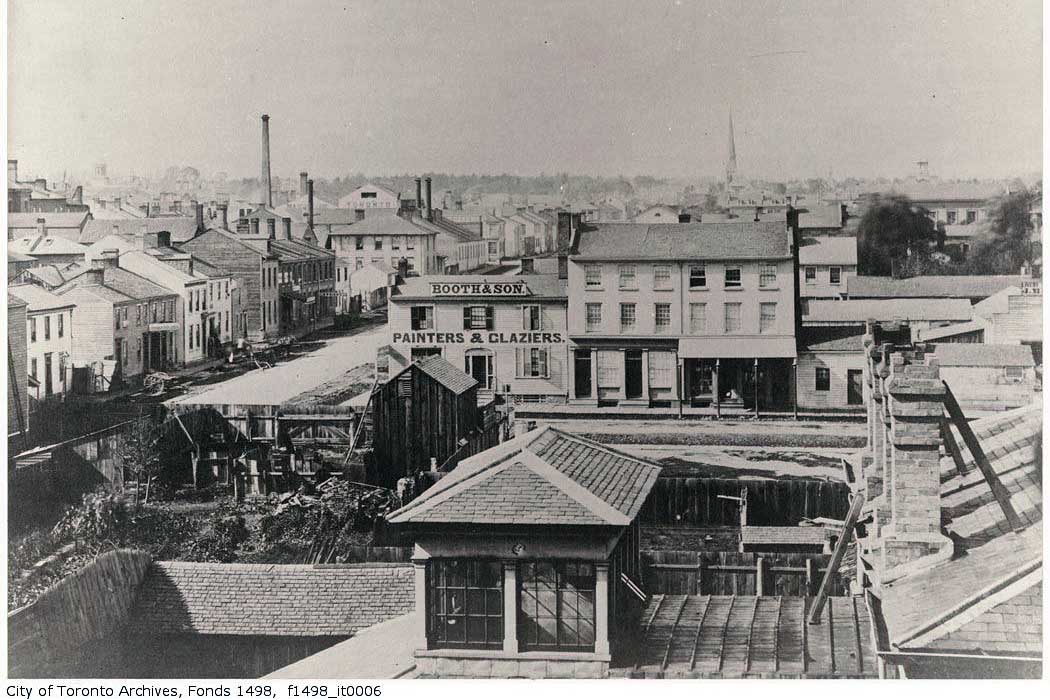 That Toronto’s first synagogue was located over a drug store at the corner of Richmond and Yonge Streets is fairly well known in the Jewish community. But what this structure looked like and the general appearance of the neighbourhood is another matter, for no picture of this building had ever been discovered.

I came across a small sketch of this drug store while leafing through an 1856 Toronto directory. It was on an advertisement of Shapter and Coombe, druggists, announcing that they had taken over the establishment of J. C. Bettridge, at 110 Yonge Street, which was then at the south-east corner of Yonge and Richmond. (1)

Because of the synagogue that was housed within it, this little building was associated with all aspects of Jewish life at this time. For the synagogue was the hub around which all activities revolved. It was not only the religious and social centre but also the place where Jewish births, marriages and deaths were registered. For until 1869, when the provincial government took over the registration of these vital statistics, such records were kept only in the parish church (2) and the synagogue served this function for the Jewish citizens. The enlarged reproduction published herewith brings out the details in the building and in the adjoining streets, not noted in the original sketch, that enable the reader to become acquainted with what must have been a familiar sight to our religious predecessors.

At this time Toronto had a population of about 45,000. Market Square was the centre of the city and King Street was the main thoroughfare. Yonge Street was a secondary business area and Queen and Yonge was “uptown.”

The Jewish community consisted of sixty to sixty-five men, many of whom were married and had families. It might, perhaps, be more realistic to speak of two Jewish communities — the earlier settlers who, in 1849, had formed the Hebrew Congregation of Toronto and those who had arrived after that event. Generally speaking, the former were individually older and more affluent. 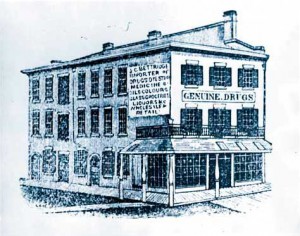 It was the newer arrivals who, in 1856, organized the synagogue which became the Holy Blossom Congregation and, in so doing, projected themselves into the mainstream of the life of this small community. It was through them that the torch of Jewish continuity was passed on to the generations that followed. The older settlers were content, at first, to stand on the side lines. A merger of sorts was effected in 1858, whereby Holy Blossom purchased the burial ground and took over the name of the Toronto Hebrew Congregation. It is ironical that the major condition of this conveyance, insisted on by the Hebrew Congregation, that a fifty foot strip across the top of the burial ground be reserved for their families, was for nought; this land was never used by them. For not death but emigration and intermarriage caused the ultimate disappearance of the older community.

The building on the south-east corner of Richmond and Yonge had been occupied by Bettridge, who was originally a grocer, as early as 1843. Shortly afterwards, he added drugs to his stock and in the 1846 directory we find his name included in the professional list of druggists.

John Coombe and John T. Shapter, who took over the store in 1855, did not remain partners very long for by September, 1856, when the synagogue was located there, only the name of Coombe appears as the landlord in the Holy Blossom minutes. Coombe ultimately transferred the business to Henry J. Rose, in 1863, and the latter, in turn, sold out to Neil Co. Love about 1869. The above three were the proprietors during the nineteen years that the synagogue was located there.

A study of the accompanying illustration brings out certain impressions of interest. The neighbourhood does not give the impression of opulence, even for that period. Both Richmond and Yonge Streets have wooden sidewalks and the roadways are unpaved except for wooden planks at the crosswalks.

The building has three stories, the first being occupied by the drug store. The synagogue was on the third floor. That remarkable link with the past, the late Sigmund Samuel, son of Lewis Samuel, a founder of the Holy Blossom Congregation, remembered the old synagogue. In his mid-nineties he could still recall walking up those flights of stairs when, as a little boy, he accompanied his father to services. (3)

From the London Jewish Chronicle, November 14, 1856

The entrance of the drug store was on Yonge Street and a portico extended over the sidewalk. Above was a porch surrounded by an ornamental railing. The sign on the building indicates the usual items on sale in the average drug store of the period except for the glass, groceries and liquors which were a carryover from Bettridge’s previous business.

The entrance to the synagogue was on Richmond Street. We know this from its first listing in the directory in 1859 — “Jewish Synagogue, Rev. H. Goldberg, Minister, 155 Yonge St. Entrance from Richmond St.” Of the three doors on the Richmond Street side of the building, the middle one is obviously for deliveries. The western door appears to lead into the drug store. This leaves the eastern door as the entrance to the stairs leading up to the synagogue.

No detailed description of the synagogue is available. Scattered references in the Holy Blossom archives, however, leave little doubt that the structural arrangement of the sanctuary was in conformity with Orthodox tradition. It could seat about one hundred worshippers. Its appearance must have been rather stark, however, for hurriedly “fitted up as a place of worship” (4) within a period of less than two weeks, there could have been little or no ornamentation. A far cry this little upstairs synagogue at the corner of two muddy streets from our palatial houses of worship in Toronto today! ♦

© 2012. All rights reserved. Reprinted with permission of the family of the late Dr. Eisen.

Notes
(1) When the numbering system of Yonge Street was changed shortly afterwards, the odd numbers were assigned to the east side of the street and 110 became 155 Yonge Street as it is today.
(2) Personal communication from the office of the Registrar General of Ontario.
(3) S. Samuel, In Return. University of Toronto Press, 1963, p. 11.
(4) Holy Blossom minutes, September 21, 1856.

For more on Dr. David Eisen, please see the article Dr. Eisen was a dedicated historian, and check the index for his other articles.