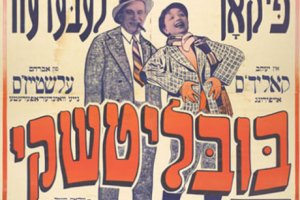 The opening ceremony and initial performance at the Standard Theatre, the latest addition to the places of amusement of the city, passed off very successfully last night.

His Worship the Mayor snatched a half-hour from his duties at the City Hall to be present and congratulate the directors on the consummation of their painstaking labors, and Mr. E. Singer acted as Chairman.

The permanent choir of men and soprano boys, accompanied by the orchestra, sang a number of selections in a very pleasing style; the manager, Mr. A. Littman, made a felicitous speech, and there were present Messrs. J. Axler and Chr. Pasternak, and the architect, Benj. Brown, to share in the general congratulations.

The new theatre is situated at the northeast corner of Spadina avenue and Dundas street, and covers an area of 140 feet by 70 feet. It has no ornamental exterior, being enclosed on its frontages by shop premises.

The theatre will seat comfortably 1,500 persons. The auditorium is divided into two floors, one being known as the orchestra and other the gallery or balcony.

There is a mezzanine apartment on the second floor, handsomely furnished with sofas, chairs and other comforts. The decorations of the theatre are worked out in subdued tints and the general design is very attractive.

On the ground floor, but not in the auditorium, there is a refreshment room, in the basement a smoking-room and toilet for men. There are also dressing-rooms for women, telephone conveniences and a checkroom for overcoats, etc.

On the whole the new theatre has been constructed on up-to-date lines and is understood to be the only Yiddish theatre in the Province of Ontario.

The play presented was “An Eye for an Eye,” by Anshel Shorr. It is a melodrama in three acts and a prologue, and is charged with thrilling situations, relieved by humorous episodes. The dialogue was all in Yiddish, and its purport had consequently to be guessed at through the aid of the action by those in the audience who were not of the Jewish race.

The prologue sets forth that Morris Feinstein, a workman, finds his wife struggling desperately against the advances of their employer, whom in her defense he assaults. The employer shoots at the husband, but kills the woman, who has got in the line of fire.

Morris, who knows that he will be accused of the murder, escapes for the time, and entrusts his infant daughter to the care of a pawnbroker and his wife, with the understanding that he could claim her within a certain number of years.

The prologue closes with the entry of the police, who take Morris into custody. The play, in its progress, relates how, after a number of years, Morris returns, makes himself known to his daughter, now grown up to be a charming girl, and with her assistance brings home the murder of his wife to the real criminal.

Mr. Jacob Cohn, in the leading role of Morris, gave a very forceful impersonation of Morris, and scored an instant triumph in the prologue by his simulation of intense despair.

The portrayal of Feigele, the daughter, by Jeanette Paskevitch, was attractively versatile and animated. David Reitz, as the merchant; Louis Berman, Bernard Yong, as the pawnbroker, and Ida Beth, as his wife, all offered appropriate characterization, and the minor support was capably taken.

The play is billed for the remainder of the week, and it is expected will attract large audiences. ♦ — E. R. Parkhurst, from the Globe and Mail of August 31, 1922.

and The Standard Theatre becomes a movie house, 1935