From the Beth Sholom Bulletin, Summer 2009 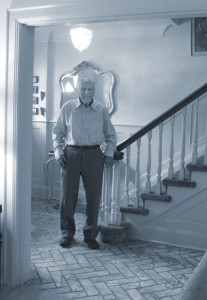 Frank Cadesky, a former president of the congregation from 1969 to 1971, has been a member of Beth Sholom since moving from Owen Sound to Toronto in 1950.

The second youngest of 12 children, Cadesky felt right at home here, even though he had previously been involved with an Orthodox synagogue in his native town. Two of his brothers, Louis and Moses, had been founding members of Beth Sholom and Louis had given the shul a stained glass window in honour of their mother, Esther Cadesky of blessed memory. Furthermore, a young Rabbi David Monson used to visit the family in Owen Sound and had often stayed as a house guest in their kosher home.

Born in the “teens” of the last century, Cadesky retains many pleasant memories of his extensive involvement at Beth Sholom over the last six decades, during which he has also served as chair of the mixed bowling league, president of the brotherhood, president of the Toronto Council of Synagogue Brotherhoods, and chair of the ushering committee. His pet project, and the one with which he will be forever associated, is the shul’s highly successful annual Humanitarian Awards, which he was instrumental in founding.

The event recognizes exemplary individuals for their good deeds at a black-tie dinner that also serves as a primary fund-raising vehicle for the synagogue. It is usually held in late September or October. Honourees have included prime ministers, premiers, senators, police chiefs, judges and businessmen of the highest rank.

“I’ve been involved in the humanitarian awards for more than 50 years,” Cadesky said during an interview in his Spadina Road home. “The longest reigning vice-chairmen who served with me were Mendel Green and Irving Ungerman. I can’t mention all of the outstanding programmes that we had, but there are three that come to mind.”

Cadesky was a longtime friend of the late Reverend Richard D. Jones, former president of the Council of Christians and Jews, who helped him attain an appointment with Ontario Lieutenant Governor Lincoln Alexander, the 1986 honouree. Instead of the usual 20-minute appointment, Alexander “treated us so royally, he kept us over two hours and served refreshments,” Cadesky said. Shortly after the awards evening, Alexander invited Cadesky to a posh reception to meet Princess Anne, where Cadesky was again accorded regal treatment.

When Belinda Stronach was honoured at the humanitarian awards banquet in 2003, “we had one of the most distinguished head tables ever put together,” he recalled. “Former prime ministers, premiers, even the outgoing president of Mexico was there. And to highlight the evening, we had a phone call from former U.S. President Bill Clinton. We had a special phone set up. When he called, everybody was really amazed and stunned. The National Post wrote up the event, saying, ‘If you think you’ve been at a gala affair, think again.’”

The Honourable Justice Rosalie Abella of the Supreme Court of Canada was the focus of another unforgettable humanitarian event in 2007, Cadesky recalled. “She spoke at great length and she had many in the audience in tears. She gave such a wonderful speech that people still talk about it.”

In the 1960s and 1970s, the highly-active brotherhood attended regional brotherhood conventions twice yearly with their wives in cities around the Great Lakes. They often rode in chartered buses to Detroit, Cincinnati, Cleveland, Dayton and other cities; Cadesky made the travel arrangements. “We were the only ones that used to charter a bus. We had the largest attendance. We usually had a full bus and some people used to take their own cars.”

Brotherhood members once chartered a DC-3 airplane to Cincinnati, enjoying a locally-supplied kosher meal en route. The plane was almost diverted by a snowstorm, but the pilot managed to land it just before the airport was closed. Unfortunately, a Shabbat dinner at the host synagogue had to be canceled.

Many brotherhood members also attended an annual regional convention in the Catskills at which, for two successive years, Beth Sholom won prizes for best brotherhood programmes. “We used to be looked up to by all the other brotherhoods and men’s clubs at the conventions,” Cadesky said.

Other highlights for Cadesky include the annual Israel Bonds dinners featuring outstanding speakers like Menachem Begin and Shimon Peres, and a 1969 dinner at which Cadesky was himself honoured and the speaker was Theodore McKelvin, a former Maryland governor. Then there were the concerts featuring great cantors such as David Bagley, Moshe Kousevitsky and Ephraim Rosenberg. On a cantor-seeking mission to New York, Cadesky and Julie Goodbaum had auditioned Rosenberg and had been so impressed that they hired him on the spot; the board approved the decision retroactively. Rosenberg sang at Beth Sholom for about six years.

Out-of-town visitors often expressed amazement at the high level of decorum evident at Beth Sholom during services. “They would tell us we had the best decorum of any synagogue they had ever been into. The ushers were under strict instructions from our senior officers. You could really hear a pin drop. We had three ushers on each side and two at the door. Anybody that got out of line, they were put in place right away.”

A retired mining company executive, Cadesky had been in the fur business in his youth in Owen Sound, a seasonal enterprise that had left him with plenty of time to become a notable athlete in both baseball and hockey. His renown was such that he was elected into the city’s Sports Hall of Fame. He and his late wife Florence raised two children. Practically every Saturday morning, he still attends the synagogue he has served faithfully for six decades now. “I have a lot of friends at Beth Sholom,” he said. “I know practically everybody there. It’s an incentive to go.” ♦