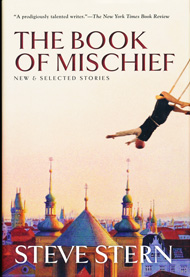 Once, as a young teenager, I had an uncanny, almost otherworldly experience that seemed to free me momentarily from the confines of my familiar world. I’d had an emotional scene at home (the details are forgotten) and needed an escape. I walked briskly into the back yard of our Bathurst Manor home and impulsively did something I had never done before — climb the triangular antenna mast.

Reaching the roof, I took a few steps up the slope towards the peak and was astonished as a vista of bungalows — neat rows of them, street after street — suddenly hove into view. Spread out before me was a vigorous universe of parallel lives, all in close proximity. The unexpected sight took me out of myself and left me breathless.

I’ve found similar feelings described in wonderful stories such as Truman Capote’s The Tree of Night, John Cheever’s The Enormous Radio — and Steve Stern’s Zelik Rifkin and the Tree of Dreams, a piece in Stern’s recently published The Book of Mischief: New & Selected Stories.

The protagonist of Zelik Rifkin and the Tree of Dreams is the teenaged Jewish nebbish of the title, who lives in the Jewish neighbourhood of Memphis, Tennessee known as “the Pinch,” where he is bullied by his peers and ridiculed by Minnie Alabaster, the girl he adores. One stiflingly hot summer, residents of the Pinch escape their oppressive homes and camp overnight in a local park, and Zelik climbs into the branches of a leafy tree, partly to escape the mocking catcalls of his gang.

Climbing as high as he can, he encounters a sort of foggy cobweb and sticks his head through — and then discovers he can see into the lives of all his neighbours, many of whom are lying on blankets in the park below. Somehow all of their dreams have risen to a common level and congealed “at a height where some dauntless climber, provided he had the means of ascent, could reach them.”

Each night over that sizzling summer, the local Jews take to sleeping outdoors, and the lowly Zelik giddily climbs the tree, puts his head through “the spiral ceiling of fog,” and starts to feel like he’s floating over the neighbourhood just like the old Jew who floats over the shtetl in a Chagall painting. He sees the hidden worlds of most of the locals such as Lipman the cobbler, Max Taubenblatt the haberdasher, Aharon Notowitz the Hebrew teacher, and Mr. Silver, his boss at the grocery store who is enamoured with Zelik’s mother.

Best of all, Zelik’s nocturnal excursions seem to transform the way that people treat him. Suddenly everyone is “giving him such a red carpet treatment, after years of either ignoring him or making fun.” Even Minnie suddenly sees him as a hero. But as the weather changes and people begin sleeping at home again, their treatment of Zelik reverts to its former chill. Preferring the mystical world of dreams, the nebbish climbs up into the tree and pulls himself entirely into the fog, free at last from the confines of the world; as the story ends his corporeal body falls from the tree with a “desolate shriek.”

Stern typically writes about comically low characters leading drab, ordinary lives who descend or ascend — it’s not clear which — into a fabulous and other-worldly realm. He is a thoroughly Jewish writer with characters fully steeped in millennia of Jewish mysticism and lore, their deeds informed by centuries of Jewish mishegas and tradition. How, for example, do folks in the Pinch adapt to the record heat? “Wearing ice bags in place of their yarmulkes they gathered in panting quorums to say prayers invoking rain.”

Not surprising for a longtime resident of Memphis who once compiled an oral history of its colourful Jewish section, Stern has written numerous stories set in the Pinch; others take place on New York’s Lower East Side, Europe and the Catskills. His acclaimed 2010 novel The Frozen Rabbi combines both the shtetl backdrop with modern America. In the book, a Memphis teenager finds an Old-World rabbi from the shtetl preserved in his family’s large freezer; the rabbi thaws out and adds dazzle to their mundane existence. A similar plot device is used to great effect in the story “The Tale of a Kite,” which features a diminutive and sprightly rabbi who floats upwards through a skylight to heaven.

In the story “Lazar Malkin Enters Heaven,” the title character is an obscenely old man who refuses to die; he is so decrepit that dust flies off him as from shaking a rug. In exasperation the Malach ha-Mavet, the Angel of Death, pushes him into an “empty burlap peddler’s sack” and carries him off. In a 2008 interview with The Forward, Stern said he realized after writing the story that many legendary Jews were similarly transported to heaven while still alive, from Enoch to the Prophet Elijah for whom we pour a cup of wine at the Passover seder.

“It was as if I’d plucked a single flower and pulled up an immense root system, tangled in which were several thousand years of wanderings, holy texts and a multitude of ghosts,” Stern explained. “Also enmeshed in those roots was a Yiddish literature aswarm with writers like I. L. Peretz, Itzik Manger, S. Ansky and I. B. Singer, writers whose stories ignored the boundaries between the ordinary and the fabulous.”

Brimming with energy and allusion, Stern’s “whiplash sentences” and sharp comic dialogue convey a Yiddish sensibility that seems reminiscent of Malamud, but with all of his ghosts and demons and mystical effects, he seems to be a natural successor to Singer in particular.

Stern, however, isn’t always master of the perfect ending; his denouments often go on far too long. His Prague-set story, “The Man Who Would Be Kafka,” for example, brilliantly reproduces the Kafkaesque universe of fear and diminished human possibility as well as a modern Prague where Kafka is celebrated as a literary Elvis.

“The stalls devoted to tourist kitsch displayed Kafka postcards, stationery, coffee mugs; T-shirts bearing his silk-screened likeness hung on racks and the slumped shoulders of youths. A bronze head, fixed to the corner of a building where Kafka was allegedly born, exaggerated his features: the jug ears stretched to satanic points, the soft eyes rendered piercing as a mesmerists’s, the forehead receding to a vampirish widow’s peak. Look left and you saw a Kafka museum, right and there was the Kafka Bookstore & Cafe. Young men, wearing bowler hats and competing with one another in anemic dissipation, held placards advertising Kafka walking tours.”

This is gorgeous, evocative prose; but the story goes much longer than it should and like several other pieces in this collection, overextends its welcome. This collection might have been more dazzling had its creator taken better heed of the critical dictum, “Less is more.” ♦