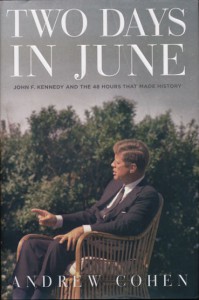 More than half a century after the presidency of John F. Kennedy ended in a tragic hail of bullets, Ottawa historian and university professor Andrew Cohen has mined some powerful but previously neglected material on JFK and written a book that could change the shape of his political legacy and legend in substantial ways.

In “Two Days in June: John F. Kennedy and the 48 Hours That Made History,” Cohen presents painstakingly detailed, hour-by-hour descriptions of two of Kennedy’s 1,036 days in office — June 10 and 11, 1963 — and asserts that they were among the most momentous of his days at the White House.

Cohen bases the claim on two speeches that Kennedy gave on those days, one on the most urgent foreign-policy matter of the era — the nuclear arms race with Russia — and the other on the equally pressing domestic concern of civil rights and the desegregation of the American South. Both were central and defining issues of America in the Sixties.

An admitted “JFK junkie” ever since he first heard the news of the Dallas assassination while a grade-three pupil in Montreal, Cohen was reportedly the first person to track down and view hours of raw film footage of Kennedy and others shot in the White House and other key locations during those two days in June. Cameramen working with filmmaker Robert Drew shot the footage and accompanying soundtrack while compiling a 52-minute documentary, Crisis, one of the earliest American films in the cinema-verite style, which aired on American television in October 1963.

In an interview with the Canadian Jewish News, Cohen explained that he was curious about any unused footage from Crisis and located and telephoned Drew in 2012. The aging director, who was then about 88 years old and who died last July, told him that at least 26 hours of raw footage had been shot for the film and that it was being preserved, along with footage from his other projects, at the Pickford Centre for Motion Picture Study in Hollywood.

Cohen quickly arranged a visit. “I went out there for five days,” he recalled. “When I went into the screening room, the archivist comes in with a dolly piled high with canisters of film and says, ‘I haven’t seen them either. We’ll watch these [together], you and I. And could we have your notes? Because we have no guide to this.’”

The many hours of grainy, black-and-white 16mm film that Cohen viewed were focused largely on the charismatic and youthful president, his brother, Attorney-General Robert Kennedy, speech writer Ted Sorenson, Alabama Governor George Wallace and other aides and individuals at various locations who were part of dramatically unfolding events during those two days.

A new, far less obtrusive method of filmmaking pioneered by Drew meant that cameras were far more portable than previously and no longer demanded large film crews, professional lighting setups or sound stages. Kennedy, not surprisingly, proved perfectly capable of being his spontaneous self under the gaze of the motion-picture lenses, even as hugely important decisions were being made.

“I guess what I want to convey is the sheer sense of immediacy that you have as a voyeur when dropped into the White House in 1963,” Cohen said of his experience with the footage. “This is unscripted, this is just the cameras rolling, this is just Jack Kennedy in his office. I was rapt.”

Soon after returning on an overnight flight from Hawaii, JFK delivered the speech on “world peace” as a commencement address at Washington’s American University on the morning of June 10, 1963. Only eight months after the Cuban Missile Crisis, he was “not naïve about the Russians. He knew well their treachery, their brutality, their gulags, and their prisoners,” Cohen writes. But he craved a new approach to peace, knowing that nuclear warfare could result in annihilation on both sides. Almost for the first time, he used language that humanized rather than demonized the Russians — never as eloquently as in this memorable speech, written covertly and without input from the Defense Department or the CIA.

“If we cannot end now our differences, at least we can help make the world safe for diversity,” intoned JFK in one of its most memorable passages. “For in the final analysis, our most basic common link is that we all inhabit this small planet. We all breathe the same air. We all cherish our children’s future. And we are all mortal.”

Just as the President appealed to the American people to start seeing the Russians in a new way, so too he appealed to the nation to begin to see “Negroes” as full-fledged citizens entitled to equal rights and privileges in all spheres of life. His June 11th speech on civil rights was delivered amidst an emerging crisis as Alabama Governor George Wallace vowed to stand in the doorway to keep black students from attending the hitherto-segregated University of Alabama.

Incredibly, Kennedy and Sorenson began drafting separate versions of the speech at 6 o’clock, only two hours before the President was to deliver it on national television. Ultimately Kennedy relied upon an unfinished draft and extemporized — which he was extremely good at — through part of the 13-minute oration. “It’s a great speech,” said Cohen. “In fact, it’s a flat-out masterpiece, I think. The speeches from those days, I think, are JFK’s best.”

As Cohen details, JFK’s oration on nuclear arms became the basis for the Limited Nuclear Test Ban Treaty of 1963, and his speech on civil rights led to the Civil Rights Act of 1964, a watershed in American history.

Cohen uses many other intriguing sources to chronicle the events described in Two Days in June. He visited historian-diarist Lady Antonia Fraser in London, who opened her diaries to him and vividly recounted her conversation with JFK at a Georgetown dinner party on June 10. Cohen also drew upon the recently opened letters and diaries of Arthur M. Schlesinger Jr., the historian and presidential assistant, as well as those of Charles Ritchie, then Canada’s ambassador to Washington. He also uncovered a draft presidential speech written by the gifted young novelist Richard Yates.

A teacher at Ottawa’s Carleton University and former Washington correspondent for the Globe and Mail, Cohen is the author of six previous books on Canadian subjects, including Why Canada Slept: How We Lost Our Place in the World (2003) and biographies of Lester Pearson and Pierre Trudeau (with J. L. Granatstein). Two Days in June is his first major foray into American history.

How is it possible to make groundbreaking new discoveries on a subject that has been so acutely examined by so many brilliant minds for so many years? “There are always thing to find,” enthuses the 59-year-old author.

“It did surprise me that no one had looked at this film, and that no one before me had spoken to Antonia Fraser. But I have to say that I have an advantage that other people don’t. I’m looking at just two days so I could drill down very, very deeply. People who are writing the story of a thousand days, which is the title of Arthur Schlesinger’s history of the JFK presidency, can’t look that deeply.” ♦