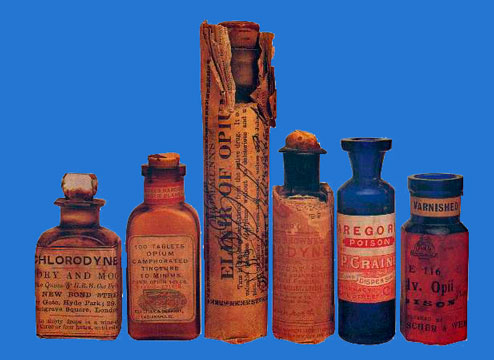 The author, in an earlier article, wrote of the career of Mr. Charles Kahn, Toronto’s first Jewish dentist. The following article deals with the first Jewish pharmacist in Toronto and discloses hitherto unknown material in the history of Jewish life in Old Toronto.

At just about the time that Mr. Kahn fades out of our picture another Jewish professional man, a druggist, comes into view.

Pharmacy began early in Toronto; in 1833 there were five drug stores in the city, all on King Street East. The number gradually increased so that by 1856 there were 24. Like dentistry it was an unregulated profession at this time and the requirements to practice it were still rather vague. Thus we find that when one of the druggists listed in 1833 died, his wife carried on the business and was listed, in her own name, in the professional list of pharmacists in the directory. 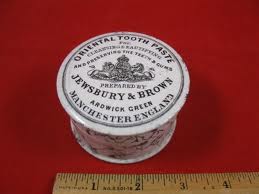 Similarly, one gentleman who carried on a grocery business in 1843, added drugs to his stock and in the 1846 directory is listed professionally among the druggists. Incidentally, the latter seem to have been surprisingly modern in their mercantile approach for they stocked not only drugs but cosmetics, oils, dyes, paints, varnishes, all kinds of brushes and garden seeds. Toothbrushes were available at every drug store and one druggist, in his advertisement in 1856, extols the virtues of Atkinson’s tooth paste for “arresting decay, imparting fragrance to the breath and a healthy, rosy colour to the gums and lips.”

As was found among the dentists, there was a considerable instability in their establishments. They tended to move around frequently and partnerships were made and dissolved. Unlike the dentists, however, the druggists themselves were more apt to remain in Toronto.

In 1867, when there were 33 druggists listed in the directory, we find, as the first name on this professional list, a Michael Blume, whose store and home were located at 117 Queen Street West, which would be a few houses east of York. Since the list was based on data gathered in 1866, we may assume that he was in business in that year. He was not, however, in the 1865 directory. 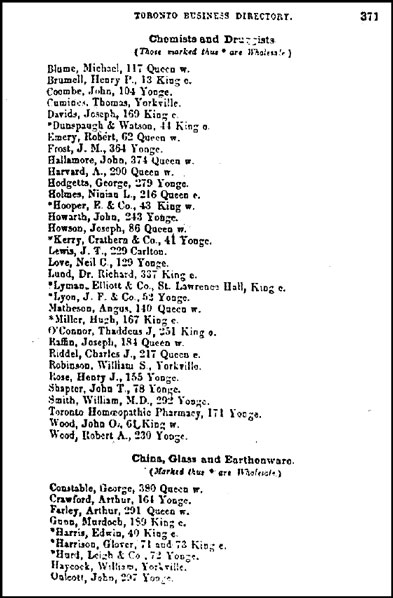 Michael Blume is the first name in this list of pharmacists in an early city directory.

His name appears again in the 1868 directory at the same address. In the same year it also appears under entirely different circumstances, in another book housed, at the time, not far away from his store, at the synagogue of the Holy Blossom Congregation at Richmond and Yonge streets.

Here, under the date of December 25, 1868, in the Birth Register is the listing of a birth; the first names of the mother and the child are indecipherable but the name of the father is clearly written — Meyer Bloom — and his occupation — Druggist. Since there is no listing of any Meyer Bloom in any of the directories of this period it would be reasonable to assume that Meyer Bloom, the druggist in the Birth Register and Michael Blume, the druggist in the directory, are the same person. Presumably Meyer was his Yiddish name while Bloom represented the registrar’s version of the spelling of the surname. Such variant spelling of names is common in the old records.

The Ontario College of Pharmacy has a record of Michael Blume from the time of the incorporation of the College in 1871 until 1879 with the exception of a break between 1873 and 1877 when he was temporarily out of business. According to their record, he died in 1880.

In the years 1870 and 1879 he is listed in the directory as Michael Blume, M.D., and in the latter year he is listed professionally among the physicians and surgeons as well as among the druggists. However, it appears unlikely that he ever practiced medicine in Toronto. He gave no indication of the possession of any degree in his registration with the Ontario College of Pharmacy. The University of Toronto has no record of him as a graduate of any faculty and he was never registered by the Ontario College of Physicians and Surgeons.

There remains, therefore, the possibility that he may have been a medical graduate of a university outside of Toronto, possibly in Europe, and was either unable to obtain a license to practice medicine or did not choose to do so.

There is a certain parallelism in the careers of Kahn and Blume in that they both became members of their professional colleges at the time of their incorporation. However, Kahn appears very much the more positive character who was apparently recognized for his qualities of leadership and organizational ability equally by his professional colleagues as by his Jewish co-religionists. ♦

This article appears here courtesy of the Eisen family. © 2012

Dear Bill, I would like to thank you and David Eisen for publishing this article. Michael Blume is my great great grandfather. To my knowledge there is no present Blume descendent who is of the Jewish faith. As a child I was informed that there was Jewish ancestry which came through the Blume family.
I would like to provide a little more information if I might. Michael apparently was born in New York city around 1839. He was married to Sophia (Bessie) Mendel born about 1835 also in New York City.
David Eisen mentions a birth registration under the date of December 25, 1868. He mentions that Meyer Bloom “druggist” could be assumed to be Michael Blume. If so, I have in my files two possible children to which this date refers. A son Charles or a daughter Sarah were born about this time. Sophia gave birth to eight children. It appears that the first three were born in New York, Edward (1859 – 1940), Isobel (1859 – 1936) and Morris (my great grandfather 1861 – 1893).
Edward died in the town of Simcoe in Norfolk County Ontario. There is no record where Isobel died. Morris lived and died in Toronto. The remaining children Barbara Rose (1862 – 1935), Charles (1867 – 1941), Sarah (1867 – 1942), Henrietta (1870 – 1958) and Matilda (1872 – ?) probably all lived in Toronto. Mailing lists kept by an aunt gave the married names of the girls in Michael’s family, their married names and some addresses. The name of a spouse for Matilda is not known.
I have not been able to trace the Blume or Mendel family history beyond Michael and Bessie. I am hoping that I will be able to meet with success now knowing his name was Meyer Blume. Thank you again for this wonderful record of my family.
J.H., London, Ontario (2012)
* * *
Hi Bill:  I came across your article on Michael Blume on the internet and it confirmed a suspicion I had.  I collect old pharmacy and patent medicine bottles from Toronto and over the years have done research on some of these early individuals and companies.  Several years ago I had the priviledge of connecting with Mrs A. Hashmall.  Her husband Ansley as you may know is considered by some to be the first Jewish pharmacist in Toronto.
After doing further research I found that both Ansley and a Moses Singer graduated from the College of Pharmacy in the same year.  That being said it seemed very likely, given Toronto’s age, that there had to be somene earlier and you have found that person!  It would seem the difference is that Michael was the first practicing pharmacist but Ansley and Moses were the first licensed prarticing pharmacists. Thank you for shedding more light on this story.Sincerely,
G. M., (Canada, Jan. 6, 2013)